I’ve been thinking about how to make a thread about this without just saying bland stuff like “never forget” and what have you, and it’s kind of difficult for me to know how much and in what ways this has been, or is, discussed in other countries. Sometimes it feels like even other parts of my own country is so far removed from what happened that day, and I guess to some extent it is just so surreal that people who weren’t there and/or weren’t affected personally won’t ever really understand what it was like. I imagine it’s much the same with the London attacks and any other comparable situation.

Anyway, getting off track a little bit, but not too much: Because I’m struggling to find anything meaningful to say here but also really wanting to start a thread about this, I thought I would invite you all to ask any questions you may have about the terrorist attacks that took place ten years ago today, what has happened since, or anything else you’re confused about or want to know more about. I’m not an expert as such but it’ll be easier for me to access a lot of information on this, I’m sure, and I kind of already know what’s relevant and not. If anyone wants to share any interesting coverage from abroad (ie. not Norway), you’re also very welcome to do so, but please contextualise with a comment or question or something.

Note: I was not personally affected by the attacks, other than living in the city where the first part of the attack (bombing of government offices) took place. Can’t quite believe it’s been 10 years to be honest.

Here’s a quick run-through for those of you who are interested: 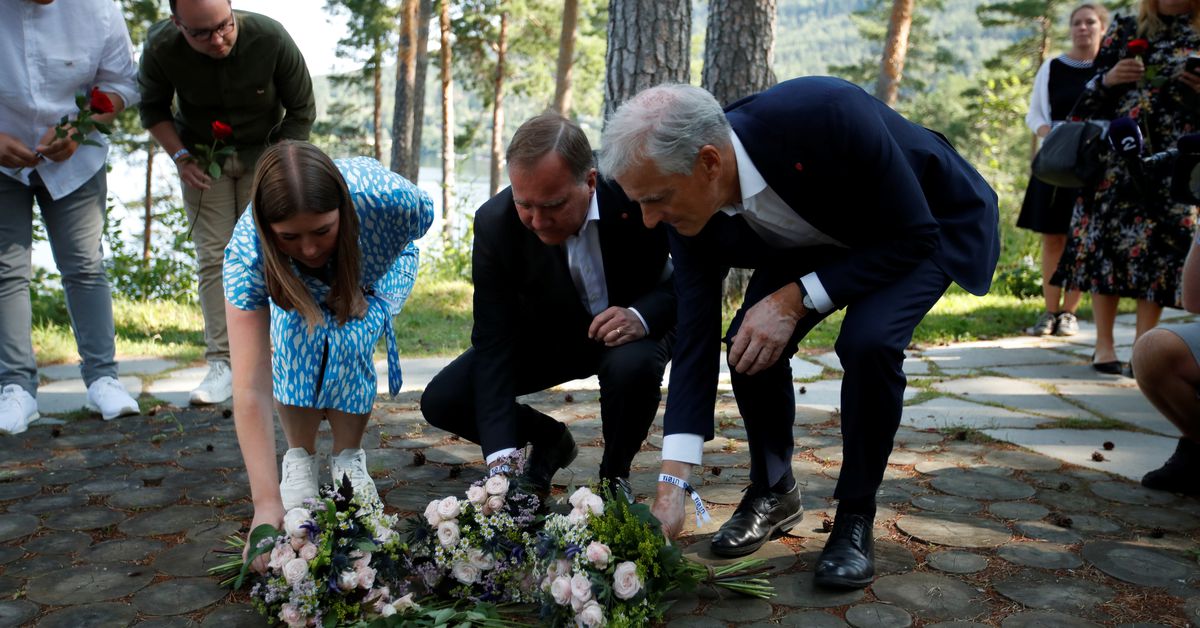 Church bells rang out across Norway on Thursday to mark 10 years since Anders Behring Breivik, a far right extremist, killed 77 people, most of them teenagers at a youth camp.

I remember being very deeply affected by this - unimaginably horrific. I can imagine it must have had an effect on the national consciousness.

Did it have any effect on far-right radicalisation in the years since?

Just a horrible event. Can’t imagine what it must have been like in the country that day, that week.

Something of an aside, but…

After the event and the image of the perpetrator was in the news - the one they’d made in uniform against a white background - it looked really familiar. Couldn’t place it for a few days.

After a while, I think I figured it out. I think that in the months beforehand, the perpetrator placed adverts in some of the British press, specifically in the back of Private Eye, a satirical but news-focused fortnightly magazine. I didn’t have the back issues so I couldn’t check, but I tried to raise this with PE and couldn’t get them to acknowledge it.

Could be a total imagined memory but without having back issues to go through it’s impossible to prove.

Remember this very vividly, as I was on a summer course where one of my classmates was a member of the political party that was targeted on the island. She knew a lot of people and, if my memory from 10 years ago serves me, it would have been very likely that she would have been present on the day if she had not been accepted onto this course (we were 18-20ish).

Remember feeling absolutely helpless to console her - indeed, other members of the class were much better at doing so.u Such an evil thing to happen.

Now agonising whether I should send a short message with my commiserations. We continued being acquaintances/kind of friends for another 4 years or so after the course (we went to the same uni). But we haven’t been in touch for about 5 years.

(I’m out and about for a bit but will reply later!)

In my head I feel like this was the first big white fascist terror attack at least for a while. As in felt like the first time the tabloids had to actually confront the notion that someone not Muslim and even not brown was behind a terror event in a post 9/11 world.

I remember this happening as well and feeling so shocked and horrified as someone around the age of the campers (I think?) when it happened.

I was working from home at the time and had the rolling BBC News on that day, and as things were unfolding can distinctly remember an expert of some kind (I think an academic) being interviewed and basically saying it was definitely going to be an Islamic group behind it, not even allowing for any other possibilities - even the presenter interviewing him seemed a bit taken aback by his certainty.

They were mostly teenagers at the time, the youngest was either 13 or 14. So obviously the attack would’ve been horrific anyway, but the fact it was mostly kids/teenagers who were killed made it extra awful. A few adult camp workers etc were killed on the island, and the victims from the bombing in Oslo were adults. But what I can never shake is how I felt seeing the pictures of all those kids, just their various facial expressions in the school portraits etc that were used as official photos of them, imagining their excitement to be on the island, and to begin to even consider the sheer horror they experienced there, whether they died or survived… Utterly heartbreaking.

If anyone’s ever in Oslo, I highly recommend a visit to the 22nd July centre in the old government quarters. It’s rough, but very well presented imo. Includes individual photos of all the victims, some of the abandoned phones and other belongings that were found on the island afterwards, and even what remains of the bomb truck.

as things were unfolding can distinctly remember an expert of some kind (I think an academic) being interviewed and basically saying it was definitely going to be an Islamic group behind it, not even allowing for any other possibilities - even the presenter interviewing him seemed a bit taken aback by his certainty.

I think a lot of us over here felt a weird sense of relief when it was clear that a white norwegian man was behind the attack. Many of us were no doubt imagining the absolutely devastating effects it would’ve had for the many Muslim people and other immigrants living in Norway, if it had been some kind of radical Islamist group/person who was behind it.

Sadly, several Muslims were assaulted in the time before the terrorist’s name and face were made public, as some absolute dickheads just jumped on the chance to target someone. No further fatalities, thankfully, but still pretty fucked up.

I kind of think somewhere in between these two options, to be honest. Absolutely a nice gesture and it’s impossible for someone who doesn’t know the both of you better to judge how it would be received. But there’s also extensive national coverage of this all day and all week, so this is the one time that people ARE being very vocal about supporting the survivirs and so on, which at least we as a country definitely should have been doing more of continually. Anyway, I would maybe wait a few days or something and then if you still feel like it based on your relationship with this person, just send them a simple message letting them know you’re thinking about them.

It’s really horrifying but important to remember that the man who committed this attack quoted the Daily Mail in his manifesto, including pieces by Jeremy Clarkson.

Looking through a list now, and 10 years ago I would have been average age for a camper

Did it have any effect on far-right radicalisation in the years since?

From my perspective, no. There was another attempted terror attack in 2019, aimed at a Mosque outside Oslo, from another white man on the far-right who was inspired by Breivik. We’ve also seen the most far-right government in the nation’s history since then. There’s definitely a feeling that there are a lot of fancy words about healing and solidarity and inclusion and all of that, without much at all being done. Politicians and journalists have been talking about a «post 22nd of July reckoning» for years, and our conservative PM (who previously included the far-right populist party into her government) seems to be of the opinion that we have had such a reckoning. Many of us disagree.

This seems like very wise advice. Thank you for it!

For context he did also claim (and kept claiming for some time!) that he was but one cell of a vast international network of «soldiers» and associated with what he called the Knights Templar, and so on. So whatever he wrote or chose to include in his manifesto is also, you know, not super reliable.

10 minute stroll from my current home, in the city centre of Oslo, on the 23rd that year Just seen a police officer on the news talk about his experiences as a first responder on the youth camp island. Harrowing.

@whiterussian what’s the feeling about the films about it? Seen both and one was really good… but felt quite… soon? And possibly exploitative.