Predict this one will get a lot more attention than the last two! Bandwagonesque is the third album by Scottish alternative rock band Teenage Fanclub, released in November 1991 on Creation Records. The album gave the band substantial US success when the single "Star Sign" reached number four on the Billboard Modern Rock Tracks chart, becoming their biggest hit in that country, with "What You Do to Me" and "The Concept" also becoming top 20 hits on that chart. Bandwagonesque was voted 'album of the year' for 1991 by American music magazine Spin, famously beati... 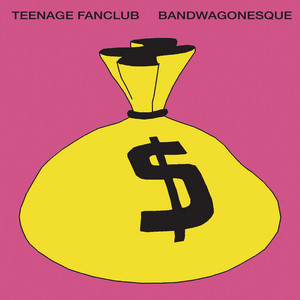 Gone with a 9, but it’s no Songs From Northern Britain, is it?

Great record… .giving this a 10

Gone with a 9, but it’s no Songs From Northern Britain, is it?

I’d give that a 10 too & Grand Prix as well. Love the Fannies

A very rare 10 from me. Sheer perfection covered in beautiful fuzz.

Saw them on this tour supporting Nirvana.
They were rubbish and so is this album.

It’s good (9) but I prefer Grand Prix and Songs from N Britain.

Bit bored of these threads but had to vote on this one cos I’m really defensive of this record after a snobbish pal said it was shite. I fucking adore it and it’s the only TF album I really care about. It’s like listening to a cuddle.

They pretty much passed me by at the time, but ended up buying this after reading some hyperbole or something and it sounded like something I should like.

But I just don’t get it - it just sounds very mediocre to me. Nothing very offensive, but also nothing that really grabbed me in any way at all. Not heard it in a long time but really not something that I feel particularly compelled to revisit.

Really don’t know why they are loved as much as they clearly seem to be.

I am the same with this album and band. I feel they should be a band I love as many people who like the same sort of music I do love them but I have just not been able to get into them really.

Tried again with this album and just couldn’t find anything to really connect to, all just felt a bit, meh.