Hello all! Welcome to the 2019 Second Season of the Electronic / IDM /Ambient / Drone Listening Club!

Each fortnight, on a Thursday, one of our awesome board members will detail the pick. It will be then added to a big playlist!

Last years was a massive success. This will ls be I’m sure! Thanks to @Twinkletoes for starting this off.

Inspired by the hip-hop listening club, this is the same concept but for the broad spectrum of ‘electronic’ music. That’s a fairly unhelpful term but I imagine we’ll all have a similar frame of reference. One record per week on a Thursday because that’s currently tomorrow - PM me if you want to be involved in selections and I’ll let you know when it’s your turn. Post the album art, preferably a link to Spotify / Bandcamp (needs to be easy for those of us who don’t already own the album to listen…

So the rules are simple

There will be a up to date playlist I’ll get together, but Season 1 is linked below. 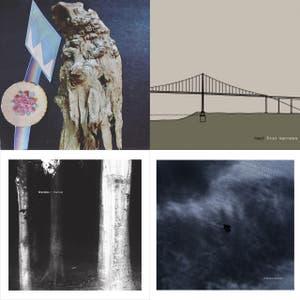 Allso there is a master sheet of all the picks here.

First pick has been given to… @McGarnagle!

Right then, sorry for the delay - I’ve been in meetings all day today.

My pick is The Sinking of the Titanic, by Philip Jeck, Gavin Bryars and Alter Ego.

The piece was originally written by Gavin Bryars in 1969 and was intended to mirror the last fateful moments of that ship and the people on board.

The music springs from a persistent story that the band continued to play even whilst the ship went down. This story originated from one of the Titanic’s wireless operators, Harold Bride:

“[T]he band was still playing. I guess all of the band went down. They were playing “Autumn” then. I swam with all my might. I suppose I was 150 feet away when the Titanic on her nose, with her after-quartet sticking straight up in the air, began to settle - slowly…the way the band kept playing was a noble thing…and the last I saw of the band, when I was floating out in the sea with my lifebelt on, it was still on deck playing “Autumn”. How they ever did it I cannot imagine. That, and the way Phillips (the senior wireless operator) kept sending after the Captain told him his life was his own, and to look out for himself, are two things that stand out in my mind over all the rest…”

Built around the repetition of the hymn, the piece falls in and out of focus. Over time, disintegrating and disappearing, becoming more enveloped with reverb and losing the higher frequencies in an attempt to reflect the fact that the way sound travels in water.

There are a number of versions of the piece, but for me the version with Philip Jeck and Alter Ego is the definitive one. Jeck’s manipulation of turntables and electronics somehow giving an eerie sense of technology collapsing under the power of nature.

Whether or not that story is really true I have no idea, but to me the idea of those musicians giving the only gift they could to so many people in their last moments brings a lump to my throat. And when I listen to this it feels as appropriate a tribute to those musicians, that story and the others who lost their lives as anyone could conceive.

Over to all of you!

The Sinking Of The Titanic (1969- ), an album by Philip Jeck on Spotify

This is such an interesting first pick. I’ve listened to a lot of Philip Jeck but not really digested this so I’m excited to really chew on it.

Might be the only Jeck album I’ve never heard. Pumped.

One long song, nice. Channeling their inner Bengalfuel I see.

This is the only version I’ve listened to. Absolutely love it though. Great recording

Bryars: The Sinking of the Titanic: Jesus's Blood Never Failed Me Yet: Amazon.co.uk: Music

Don’t think I’ve heard this version. Will have to check it out…

Listened to it after the Aphex remix, is great, looking forward to a re-listen tomorrow, nice pick @McGarnagle!

Don’t think it’s available on Spotify fyi. I may have the cd if you’d like it, but it’s cheap enough online

Cheers mate! I’ll just have a little look around to find it online for a listen. Sure I could find it somewhere…

Just finished this piece and what a great way to start!

First off, I love the idea of a concept ambient piece like this, even if one long track. A recent standout was Frozen Vaults ‘1816’ based around one of the coldest years on record. Soundscapes of wind howling, utter droney dark despair from what you feel like the climate would be at the time.

So knowing this was a period piece around music playing from the falling of the Titantic ,I immediately try to immerse myself in thinking what it would have sounded like if I was there and the band continued to play.

Opens with what sounds like a Victrola spinning on repeat in the background, developing into some spastic cackling of drone. 15 minutes in, beautiful elongated violin concierto piece with what sounded like a subtle ship’s horns. Like the Titantic was just shimmering, coasting the seas ever so gracefully. The regalia of the band continues on the wonderful violin pieces 25 minutes in.

40 minutes in feels like pandemonium, simple narrative screams and utter chaos. Love the first account narratives thrown in with the modern compositions underlying it.

All in all a great choice. Jeck and company capture the elegant sound of the graceful beauty and utter despair of such a historic tragedy. Loved it.

First of all, that prolonged static into the first creak of violins is a wonderful way to lead in, particularly with the drone to back it. Reminds me of a wonderful live tape looped performance I heard of Moon River by a DJ in Worcester, had all the same crackle, and layer upon layer of Moon River over the top. Played in a church - wonderful…

This sounds fantastic. Actually annoyed I’m not in the office to get the headphones on and listen to this today.

Sends shivers down the spine. It really is magnificent work.

I’m not sure which version I’ve heard before, think it was the one @rich-t linked too, but looking forward to a few headphone listens of this today.

The pandemonium almost sounds more like a football match than people on a sinking ship, but it does sound like pandemonium nonetheless…

Never really spotted it before, but a lot of the middle section has a sound like crickets - I know there were animals on board, but it almost feels out of place. That said, descending into the murkier end now where the sounds are blurred and buried, like they’re sinking under the cold water. The crackle has gone, perhaps to mirror the icy clarity of the water?

This plinky percussion around 18 mins in Jeck/AlterEgo version is lovely.