The great egg ball tournament is back, with the fans in attendance making it a billion times better than last year already!

Looking forward to the games tomorrow, particularly the Calcutta Cup - can Scotland retain the cup at Murryfield with possibly the strongest squad in a long time??? Would like to see them do a job on England, who have seemingly scraped together a pretty decent team after injuries and covid disruption. Surely Ireland are too solid for Wales in the opening game (in Dublin), and France definately a shoe-in over Italy.

Favourites to win the whole thing? probably down to France and Ireland. Could it be a France slam?? Might stick a fiver on that actually.

@imgrandsure
looking forward to going out all day tomorrow for the six nations. I have no interest in rugby but I have a profound interest in drinking pints so it balances out
8 Likes
Severed799 4 February 2022 16:49 #3

Scotland will win this years 6 nations.

Pretty confident tbh. I know people didn’t expect us to win last year, but we did, and we’re better now.

Really exciting back line, most attacking Welsh side in a long time. Could be leaky and of course Ireland away tomorrow is probably the hardest start you could hope for, but potential in this side to be great fun to watch.

France have to come to Cardiff too which will be great fun.

On form, this should be the strongest tournament for a long while. Don’t think England are going to get up to much tbh. Some baffling squad choices from Jones, albeit some necessary from a covid POV. Can’t wait to see France with a bit of momentum. Should be excellent. Hope Scotland can continue to build on last year’s competition. Wales will Wales. Some really good progress under Pivac. And Ireland will be strong

Unfortunately just really cba with a lot of sport atm, and I’m struggling to get excited about it all tbh.

Yeah agree - properly resurgent France and Scotland make it the most open tournament for ages. Apart from Italy, you could see any of the teams beating the other on a good day

Dan Biggar as captain is bittersweet too ngl.

I know next to nothing about club rugby but I bloody love the 6 nations. Not up to speed on the Irish squad at all this year but we’ll all be hollering at the tv this weekend.

MACK HANSEN on the wing for Ireland tomorrow

If anyone wants excellent analysis, Squidge Rugby on YT is your guy. Really really good. 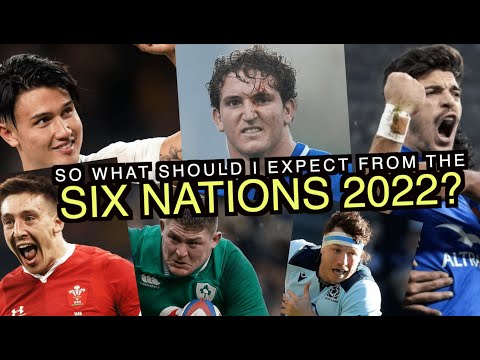 Is a Wales fan though, so pinch of salt and all that

His video on France beating New Zealand is very good

That whole passage about the no look pass

Hard to think of any other sport where the England captain being out injured would be met with such a shrug and sense of anticipation for seeing how much improvement his absence will make. Very interested to see if the backline that opened up the Springboks ridiculous defence can improve together.

Apart from Marchant and Daly needing to swap shirts and Quirke really being the guy who should be sub scrum half I quite like our team. Back row are all in their right position for starters.

France vs Ireland next weekend probably. Game of the tournament, especially if Dupont and Jalibert are match sharp.

Shouldn’t that be Mrs no look pass squidge?

The endless invention for names for Jobby Sex Blanket is excellent.

He gets bonus points for continuously calling out New Zealand and London Irish for being sex crime and domestic violence enablers too.

Woeful half but got away with it somehow.

Josh Adams at 13 really not working. Easy target in defence.