Alan Turing on the New £50 note

Getting very mixed vibes from this 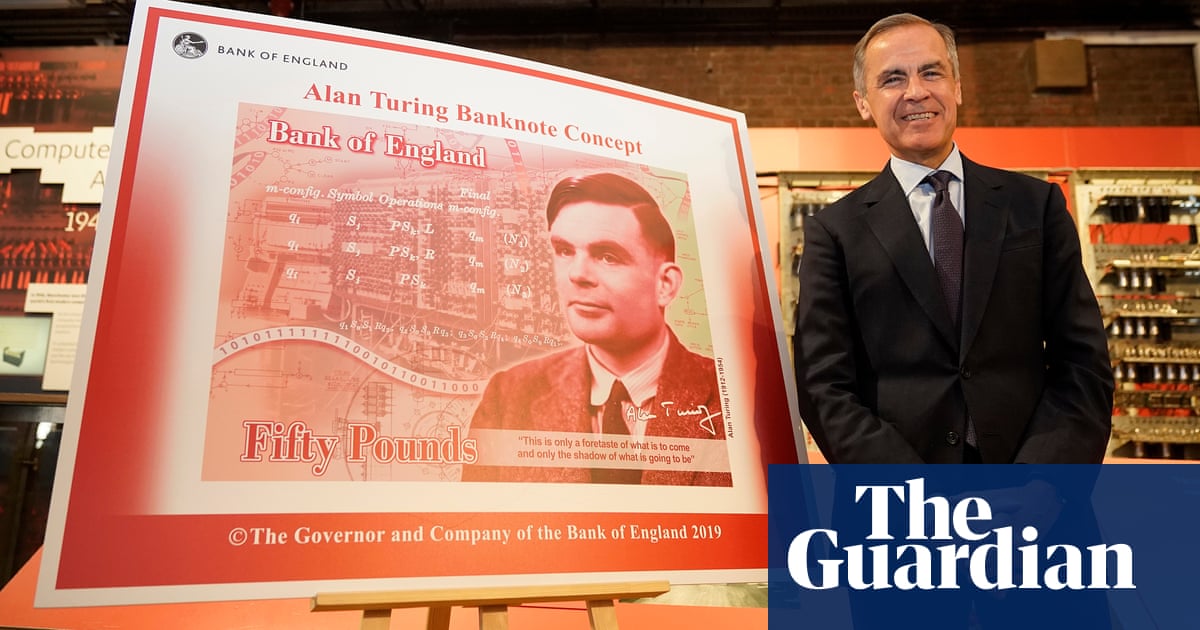 I mean, the Government has literally put him on a Pink Pound - is that… a joke? a tribute? something no one noticed or thought about (hardly likely)?

and obviously convicting him for his homosexuality and forcibly medicating him into suicide …he died at the hands of the state, is this supposed to make up for it?

On the other hand, if every kid learns about Turing, his life & works without the jingoism and with the shame laid on police and state that would be something …plus he totally deserves to be in the Pantheon of money faces for his achievements

What are we all saying about Turing on a £50 note then?

Better than having another royal or white supremacist I guess

£50 note has always been pink.

I think you’re reading too much into this.

Moving this into News & Politics

is true but it was a final selection process by The Bank of England - which wasn’t entirely uncontroversial, for various reasons

The Bank said it had received a total of 227,299 nominations, covering 989 eligible characters. These were narrowed down to a shortlist of 12, with Carney making the final choice.

Speaking at the launch, Carney said the selection process for new notes was “as inclusive as possible.” However, MPs and campaigners had warned that choosing a white scientist risked sending a “damaging message that ethnic minorities are invisible” while on Monday the campaign group, Banknotes of Colour, said its 150,000-strong petition to have an ethnic minority on a banknote had “not been taken seriously” by the Bank.

Asked by the Guardian whether the new £50 note was a missed opportunity to reflect diverse modern Britain, Carney said the Bank wanted to celebrate “all aspects of diversity” and that “to not represent the scale of scientific achievement in this country would be a mistake”.

He added: “We want to represent as best as possible all aspects of diversity within the country, from race, religion, creed, sexual orientation, disability and beyond. What we have today is a celebration of one of the greatest mathematicians and scientists in the United Kingdom and not just this country’s history but world history.”

money huh? Who even carries a £50 note with them anyway?

That’s half the issue, I’m trying my hardest not to jump to snap opinions these days.

The other side of this is that I can bet Twitter is full of people without photos of themselves called things like “Mrspeakshismind” outraged about this new note for the exact opposite reason you gave, so I can totally understand it.

yeah, I wouldn’t make too much of the colour. I’d say it’s more red than it is pink, anyway.

With only four notes available there’s always going to be deserving people who don’t feature. They should change the artwork every year, really get a range of faces on there.

On a related subject, frustrating that the Brexit approved Erasmus replacement has been branded as ‘The Turing Scheme’. Really wish that he had someone sympathetic owing his naming rights so the state (which killed him obviously) couldn’t just splurge his legacy over everything at will…

And of course there’s long been the whole jingoistic reappropriation of his story into ‘British science won the war!’

Beyond the branding, the UK was invited to stay in the Erasmus Scheme post Brexit, but turned down that opportunity obviously

As with all of our EU replacements, the new scheme will pay lip service to replacing what we already had, only be far far shitter and have much less funding

Turing Scheme: How does the UK programme compare to Erasmus?

The Turing scheme will open for applications this month. We spoke to colleges to compare the newcomer with its predecessor, Erasmus+

On the other hand, if every kid learns about Turing, his life & works without the jingoism and with the shame laid on police and state that would be something …plus he totally deserves to be in the Pantheon of money faces for his achievements

Not many kids are going to see them though, and unfortunately most that do will probably be being educated away from any degree of empathy or social understanding on their way to westminster.