there are 14 flavours in the Walkers Crisps Classics range, could you please rank them in preference order?

what is your favourite memory of the tinychat era of DiS?

hello again froglet how high can you jump

edit: to clarify, i would like to know what animal you are confident you could clear

hi froglet. i’d like to know what you are having for lunch today and either how much you are looking forward to it or how much you enjoyed it if already eaten.

How far are you from horse hair?

I was wondering, what is your favourite (and/or least favourite) type of frog?

Also, what is the furthest north you’ve ever been?

how are you coping with the stress of this thread?

No teeth or no hair?

Don’t like my teeth but they’re more useful than hair so the hair’s got to go. It’s a lot of work too.

Favourite food to eat on holiday?

Βλήτα - it’s a bitter leafy vegetable that doesn’t seem to be sold in the UK. So it’s my favourite thing to eat on holiday because it’s the only thing that I could only eat on holiday (and because I love it and would eat vast quantities when I used to go to Greece more often). Like, there are nicer things to eat than a vegetable but I can just make them at home.

Oh god that’s quite difficult. I hate talking about music because I sound like a twat. Umm, let’s restrict it to this week and I’ll say that cover of All Tomorrow’s Parties on the covers album Deerhoof have just put out.

I’ve got a nice Christmas one on the go from English Soap co that I got for last Christmas. Obviously it’s not Christmas but it’s a huge bar of soap, it’ll probably still be going by then.

What time do you get up in the morning?

As late as reasonably possible

When was the last time you bought a magazine for yourself? And what was it?

I have a New Scientist subscription so that, last week

Worst drunken injury you have sustained?

How do you feel about infant tadpoles?

When was the last time you were wrong about food?

what is your favourite memory of the tinychat era of DiS?

iSketch maybe? One memory that pops into my head occasionally is someone drawing a stretching cat for the word stretch, and someone guessed “catspan”

I love both
Turtles
Dunno
Never watched it

how high can you jump

edit: to clarify, i would like to know what animal you are confident you could clear

Not very, probably. I could probably jump over a sheep.

I’m not sure but there’s some rice in the fridge so maybe egg fried rice. Not specifically looking forward to it, sure it’ll be adequate

How far are you from horse hair?

2 miles maybe unless someone nearer has a violin or whatever. So probably more like 1 mile.

what is your favourite (and/or least favourite) type of frog?

The really colourful ones are my favourite, no least favourite

what is the furthest north you’ve ever been?

how are you coping with the stress of this thread?

It’s a lot of work

What are your favourite social media animals 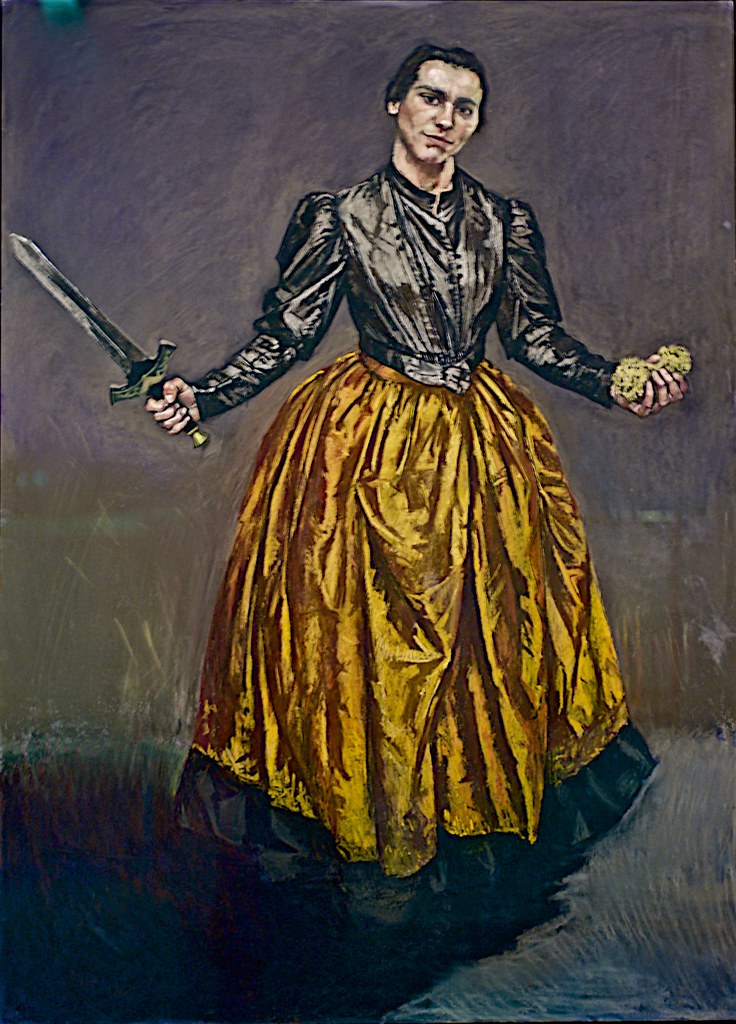 She’s about to murder a priest

(Angel by Paula Rego. It’s a character from a book, a midwife who kills unwanted babies and a priest calls her in to deal with his illegitimate child. In Paula Rego’s version she’s about to murder the priest instead)

What are your favourite social media animals

Tika the iggy because of her fabulous outfits Living in Montreal means one day I’m freezing my little tushy off, and the next...

Smoothie the cat for being absurdly photogenic