Thought it would be useful to have a thread for detailing the horrific practices of Amazon and tips for avoiding it.

That said, is boycotting Amazon a pointless affair that serves only to minimise your personal sense of guilt? Is that good enough radon to do it anyhow?

US politics thread: In the Midterms of Madness News & Politics

Not strictly politics, but just read about a “mass casualty incident” at an Amazon warehouse in Kentucky following the tornadoes. Why the fuck were people being made to work in what was forecast to be catastrophic weather conditions? For fucking Amazon who could very easily pay everyone to stay home. Absolutely nauseating. 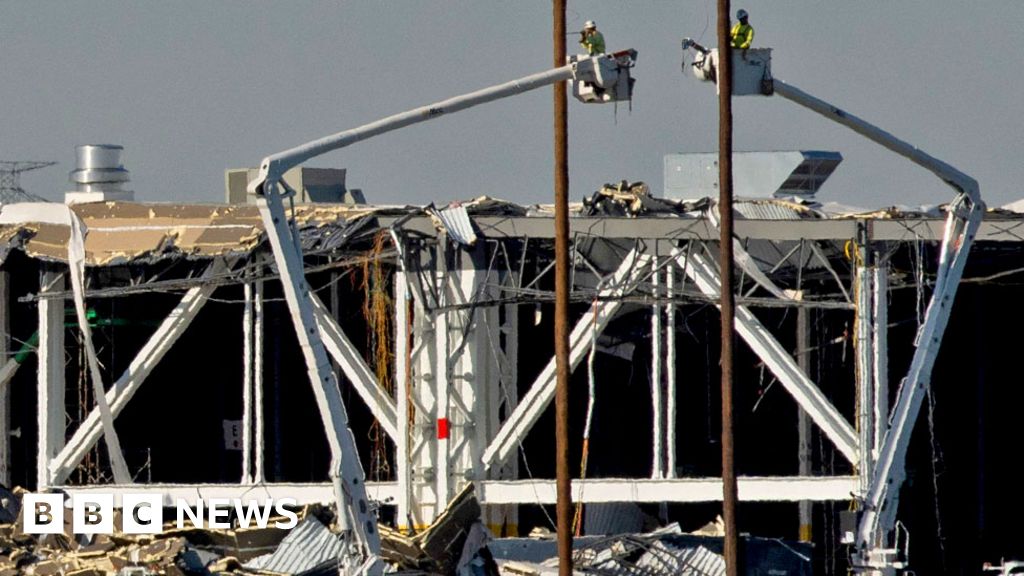 The firm said events happened quickly at the Illinois site and it was "deeply saddened" by the deaths.

Used to work for them here in Cork. Absolutely horrendous employer and that was just on the phones. I refuse to buy anything from them, though a full boycott is nigh on impossible thanks to AWS.

Did work for their compliance section for a while and that was another fucking nightmare. Never seen an organisation as incompetent as that and I’ve worked in the public sector for years now.

The text from the warehouse worker telling his partner he wasn’t allowed to leave before the tornado killed him is absolutely heart breaking.
Boycotting them does feel like such a useless tactic when if a couple hundred people turned up at Bezos’s house things would soon change.

I try not to be preachy about it, although a couple of years ago I did ask my family not to buy me anything through Amazon at Christmas. One of my sisters then took great pleasure on Christmas Day in telling me she’d bought my present through Amazon.

So yeah, my boycott isn’t exactly setting the world on fire. Would love to hear more about anything more worthwhile I can do.

my sisters then took great pleasure on Christmas Day in telling me she’d bought my present through Amazon.

So frustrating when you buy something online, having spent the time deliberately Amazon and yet it turns up in Amazon packaging because their logistics and marketplace are everywhere.

And that’s before thinking about all the stuff that runs on their servers. I’m currently moving our work’s cloud stuff from AWS onto Azure - small fry and meaningless in the grand scheme of things but hey ho.

My mum and I have both started putting on our Christmas lists that we’d prefer Amazon be avoided if possible. My dad got really arsey about it. It literally doesn’t even say ‘DON’T USE THEM’, just ‘please avoid if possible’. Imagine being that fragile on behalf of Jeff Bezos lol.

I don’t really do boycotts and it’s not an absolute boycott - if there’s something that I need at short notice and can’t get elsewhere, or it’s something I need that I don’t know where to get somewhere else, I’ll use it - but I’m trying not to. I got a £25 Amazon voucher for winning an award at work tho so I might use it to buy the Japanese import CD of Hot Pink by Doja Cat which is the only way you can get a CD version of the album

Think I’ve managed to avoid buying anything from them for a fair few years now. Only having visa as my credit/debit cards means I won’t be able to soon enough anyway.

Think it’s easier though for people like me as I don’t for example have kids or extended family to buy presents for.

Is their any practical way to deal with the web services thing?

Avoid it where possible (but like pervo I’ve had to purchase things I can’t find anywhere else, even after weeks of searching online) and of course AWS is everywhere.

My stepdad is absolutely obsessed. He’s always been a shopoholic but since lockdown he has an Amazon parcel arrive almost every day.

Is their any practical way to deal with the web services thing?

a friend of mine takes great delight in sending me pics of his pint and food, or the carpet, in wetherspoons all the time. I just don’t know why he bothers but it seems to keep him entertained for some reason

So much of my work is in AWS. I just got made redundant and was hoping to get away from it, turns out that I can’t really find anywhere that doesn’t use it in some form, and my experience with using it seems to be the thing a lot of recruiters are latching onto as my most marketable skills.

I’ve not used Amazon for about eight years now, after they threatened to bankrupt the company my mother worked for because the company refused to sell their products (nursery furniture) through Amazon. I’d started to find it a little creepy that buying online was becoming synonymous with buying on Amazon anyway.

Most things - music, books, toys, electronics etc - can be bought either at the same price or cheaper elsewhere. The only thing I’ve struggled with is DVDs, though it’s very rare that I buy those nowadays.

Most things - music, books, toys, electronics etc - can be bought either at the same price or cheaper elsewhere.

I’m sure they’re not without their own massive issues, but I find eBay has almost everything I could want available as buy it now, and a good percentage of the stuff comes clearly hand packaged and with notes from small sellers, so hopefully the order fulfilment is at least being carried out more ethically.

I like hive.co.uk, postage is usually free I think and you can pick a local bookshop to give a slice to

Forgot about them, should give them a go

Has anyone successfully done a tour of one of their warehouses? Wonder if they just advertise them for good PR or sutin.

Someone I know worked at one briefly and their main complaint seemed to be that most of their breaktime was spent walking to or from the canteen/staff area which was miles away from where he was working.

Another guy I knew seemed to quite like it and said there was plenty of overtime at £16 an hour or something in that ballpark, so idk.

There was a Guardian long read on it a couple of years ago which basically said staff wear headsets and are alarmed when not hitting targets, which seems inhumane to me, and i imagine very, very stressful.