amnesty for finding a way in to excessively prolific bands, a rolling thread of advice

There is also these threads under the tag ‘primer’:
https://community.drownedinsound.com/tag/primers

Would be good to add to the collection I reckon.

Might start a thread for ‘where to start with where do i start with an artists discography?’ threads"

I made a start once and felt like I was doing alright but they kept releasing albums and just lost the energy. Although, that isn’t going to be an issue now.

yeah i dabbled in Deerhoof for years but La Isla Bonita was the first one i listened to properly because Exit Only was so good. can’t go wrong starting there.

okay, work is done for an hour or so, so i’m going in 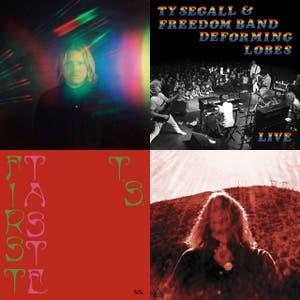 It’s made up of the albums I listen to most, but I reckon it’d be a decent starting point for anyone looking to break in.

The Fall. Pretty sure I know where to start tbh, finding the energy to start making inroads into a back catalogue that big is the main problem

if you’re overwhelmed then just stick to the 80s to begin with. there’s great stuff in other decades too, they were mostly pretty good in the 00s in particular, but the 80s is where they were making their most essential albums and you can’t go too far wrong with any album from that period.

i would tell anyone unsure where to start with Ty Segall to simply start with Twins. but this playlist is good too (aside from the lack of Twins).

and for anyone wanting to get into Thee Oh Sees, start with Mutilator Defeated At Last imo

For some reason I don’t think I’ve ever listened to Twins. On it now, expect some more tracks in the playlist

okay @Icarus-Smicarus and @manches this is strong.

i’ve spent the last week listening largely to Wooze so this is like hearing exactly what Wooze’s primary reference in their own music pretty much must have been.

Love this idea for a thread. @hardworking I would absolutely take a primer on Jim O’Rourke – I love the 7" he did for the Touch Sevens series, but his back catalogue is so huge that I have no idea where to start finding anything similar!

Aha! Excellent, that’s all the encouragement I need. I’ve got a lot on in the immediate future, so I won’t do it right away (not for at least a month), but definitely stay tuned for a big Jim primer!

For starters though, there is an extended version of that Touch 7" track you mentioned up on his Bandcamp (the other two pieces here are also v good):

Someone do Mountain Goats, please. What I’ve heard, I liked but… there’s a lot more where that came from.

(I really liked Autoclave, if that’s any kind of help)

A successful case study for the thread!

Personally I got into them via All Eternals Deck, love the range of style they cover on it and just has some amazing lyrics (though every MG album has that distinction tbf)