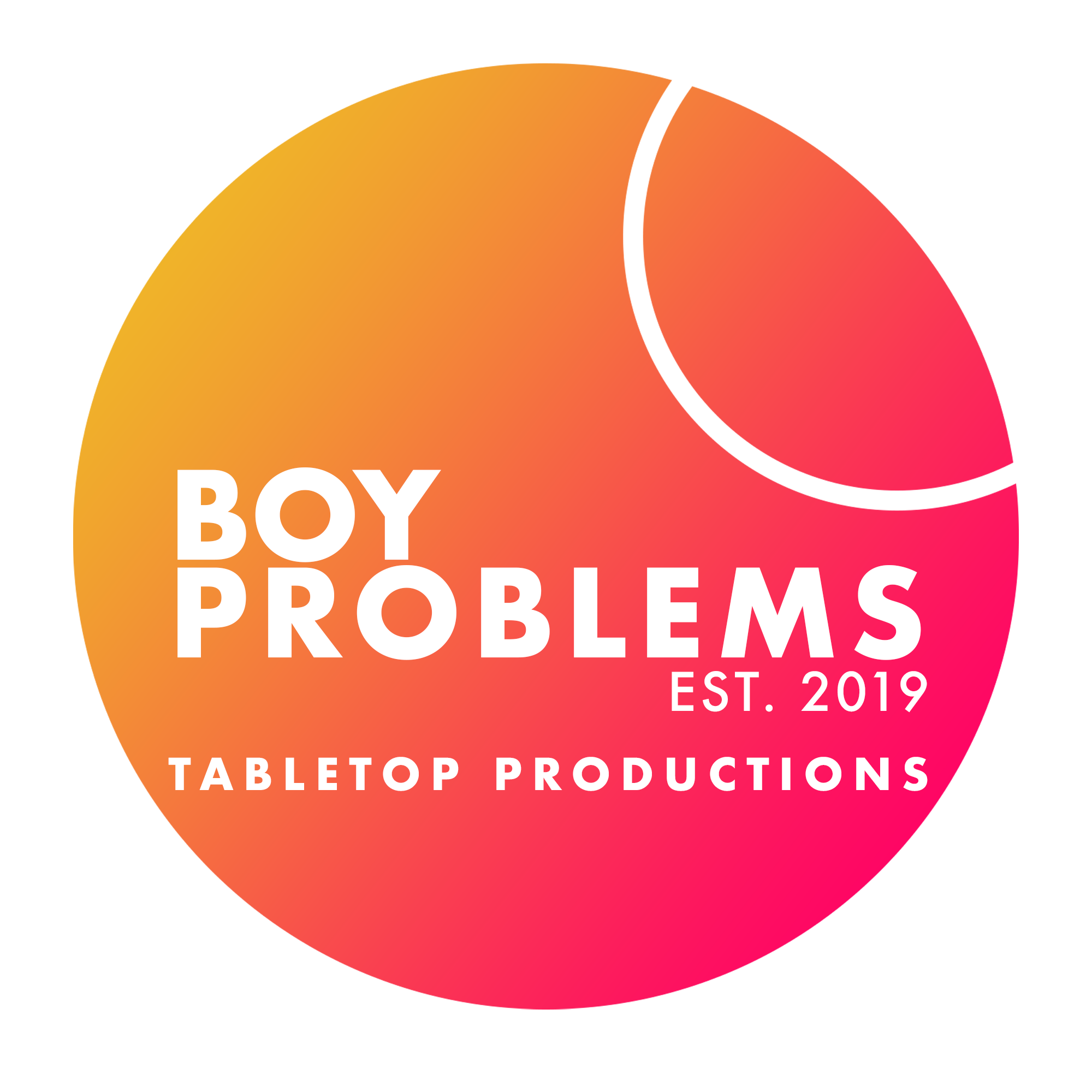 Established in 2019 and named for the game that put it on the map, Boy Problems seeks to create unique and fun games and mechanics for all to enjoy.

I can’t really do it easily due to time zones but I am willing to GM if no one else will pick up the glove I have thrown to the floor.

But seriously, would be simple enough to run one in a thread on here. Any time dice are needed you just need to

It is based on the a system called Lasers + Feelings that you can find here, btw

which is a bit more Star Trek and slightly more straightforward.

This is relevant to my interests. I was unfairly suspended last month

No, “not protesting” would be accepting that you were rightly banned for exactly the type of racist, edgy crap you’ve been posting for years and never mentioning it again, not claiming to have been unfairly banned.

Too late for that now. Sorry Carly Rae Jepsen fans!

I appreciate this is giving you exactly the type of attention you crave, but I’m not having you play the victim here then skipping off into the sunset when you’re called out on it. Given the post in question is now deleted, let me remind you: you made some ultra-weird and completely out-of-context reference to Shamima Begum and some other edgy topical figure who I forget right now recording a Christmas single together for charity. Ha fucking ha. I flagged it and you were rightly banned.

Anyone who has a spare 5 mins can find your years-long history of repeatedly posting sexist, racist and - in particular - Islamophobic comments on the old site under various user names which, given the very worst of it was deleted at the time, still makes for horrific reading.

My opinion is that you’re a tedious, racist bellend and I have no idea why this forum permits you to post any more, but given it does you’d do well not to draw further attention to it and, even more so, not act like you’re the victim round here.

Good to see Theo’s got your back though.

It was Theo liking the original post about him being “unfairly suspended” that I was responding to.

In fairness, maybe he was liking only the second half of that post.

Yep, see my edit. Apologies Theo, I can see you’ve taken a firm line on this nonsense is in the past: http://drownedinsound.com/community/boards/social/4440103#r7838293

My opinion is that you’re a tedious, racist bellend and I have no idea why this forum permits you to post any more,

Fwiw, we collectively decided to allow people a fresh opportunity to show they could behave like decent humans when we moved to the new boards. Those that couldn’t like CG and OBT have effectively had lifetime bans on their accounts and get rebanned when mods see they’re back.

In the year and a bit he’s been back, the post you refer to is the first that we’ve had to delete of his. It overstepped the mark and given history I think all the mods would stand by the ban. If it becomes a pattern then I think you’ll see him binned off pretty quick, but given he’s engaged pretty well for a while now I would also stand by it being a short one - it’s likely how we’d deal with anyone else posting the same.

@1101010 - I can move all the off topic stuff to a new thread under Rubbish if you like? Seems a decent thread idea

That’s all fine, the modding was top-notch in this instance, I just object to someone (especially with his track record) being banned for posting something racist then claiming it was unfair.

Wasn’t my intention to derail this thread but unfortunately this is where that comment was made.

Mate I liked the fact he said this was the content he wanted.

I agree with what @anon76851889 said and further I am deeply dubious of old users coming back as random ‘new’ users and then going in with a whole history of other users. At least MPBH doesn’t hide who he is behind a faux-spam user account.

He was doing it pretty regularly before he got banned, to be honest, he was just doing it in the football thread with nearly all his threads referencing Brexit or certain fans being racist

Wasn’t my intention to derail this thread but unfortunately this is where that comment was made.

Didn’t want to post myself initially because then it might come across as people ganging up on another person but you were absolutely right to call his bullshit out. it wasn’t you that derailed the thread, the original comment did. Would have been very wrong if it had gone unchallenged

Ah, okay - thanks for letting me know