I didn’t have any economics lessons at school and other than a basic understanding of supply and demand I find myself struggling to pick a side in any debate.

Friday afternoon may not be the best time to raise this kind of thing but I was just reading this article about increasing levels of automation in fast food and I’m just staggered that it’s necessary to remove more and more jobs in the quest for profit. Is the franchise model really that fucked, is there something I’m failing to grasp or is it just plain greed? 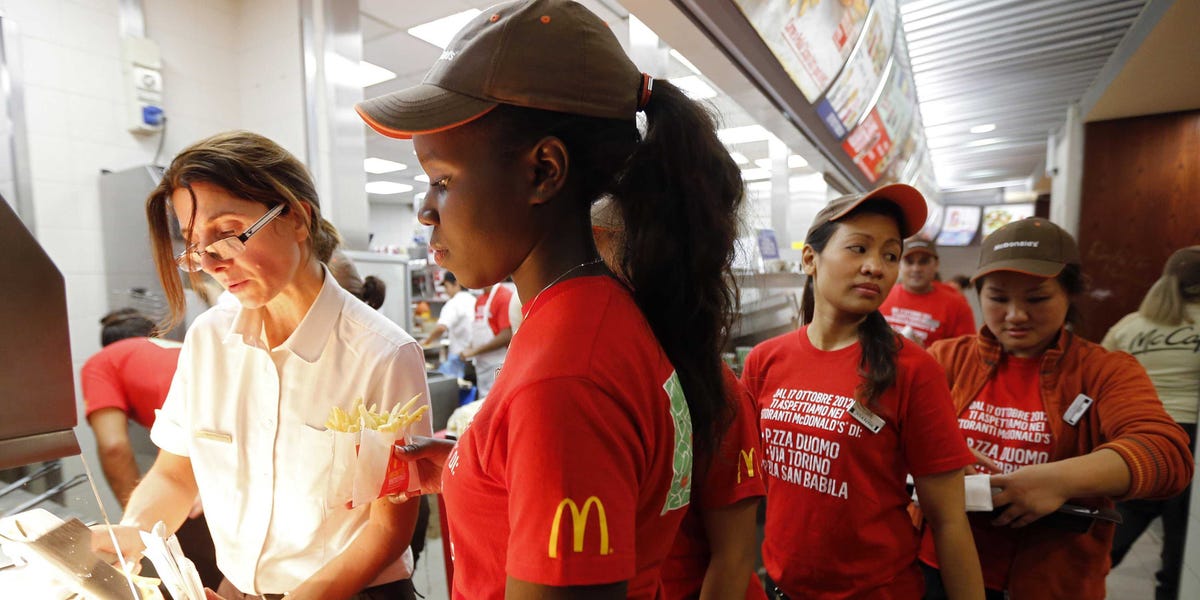 According to my degree, I have a terrific understanding of economics.

I wish I could mark stuff as solved, because this is the cause of, and solution to, a whole bushel of issues.

Probably some argument could be made about the NPV of future profits/losses when society collapses around us due to corporate greed, but it’s Friday afternoon so, meh.

the theory is that everyone is allowed to buy shares, so everyone is able to benefit financially from companies increasing shareholder value + profits

the reality is of course somewhat different…

There’s been quite a bit of work done on this since the GFC a decade ago, usually in relation to government spending, but also looking at whether corporations paying low wages and the profits tricking up and out of the economy chokes off demand and spending.

Expect it to take 30 years before it catches on though…

As far as I know the McDonald’s franchises have been a tough business for decades now. I seem to remember being told the ‘drive-thrus’ are the ones that make money and as a result of this McDonald’s have never opened them up to franchises.

The reality is that if there aren’t enough people interested in buying McDonald’s food at a high enough cost to offset wages then it’s a fucked market. How are KFC doing, for example? We’re not hearing about ordering systems from them.

On a parallel point, they make a comment there about using apps being the same thing and I’m sure our local McDonald’s has an iPad like terminal people can use. I’m not really sure how much it can really save, though? Maybe one member of staff. Is that significant? And what’s the cost associated with running the automated system (maintenance etc.)?

Nobody does, nobody anywhere on the planet. It’s all arbitrary made-up nonsense innit

marckee appears to be talking about the Global Fighting Championship.

The apps and interfaces are just the front ends to a huge ‘Big Data’ gathering system that allows the company to model demand and tailor products and their supply - it’s far more sophisticated than the previous systems and eliminates huge amounts of waste.

Don’t think many companies put that in their forecasts to be fair.

I don’t see machines as a negative thing from a customer’s point of view. Even using McDonalds as a specific example, the ones that are partially automated already, like in Europe, it’s just a much better, quicker, more painless transaction if you do it yourself on a screen. Same with paying money in at a bank. Same with buying groceries. Sure, people need jobs, and i can see why that’s more important, but the quality and speed of service is so bad in most retail environments that i’m all for our robot overlords…if that’s even what this thread’s about, i’ve not clicked the link.

Interesting. I hate it.

There was nothing wrong with talking to a person at the counter. Reducing points of contact with other people just makes life shabbier.

I have an A in A Level Economics.

In answer to your question - yes, lots of very, very good people understand economics. The problems come when you ask economists to make predictions.

What if they could make extra money by throwing the skinned orphans into a pool of salt. Would they do that too?