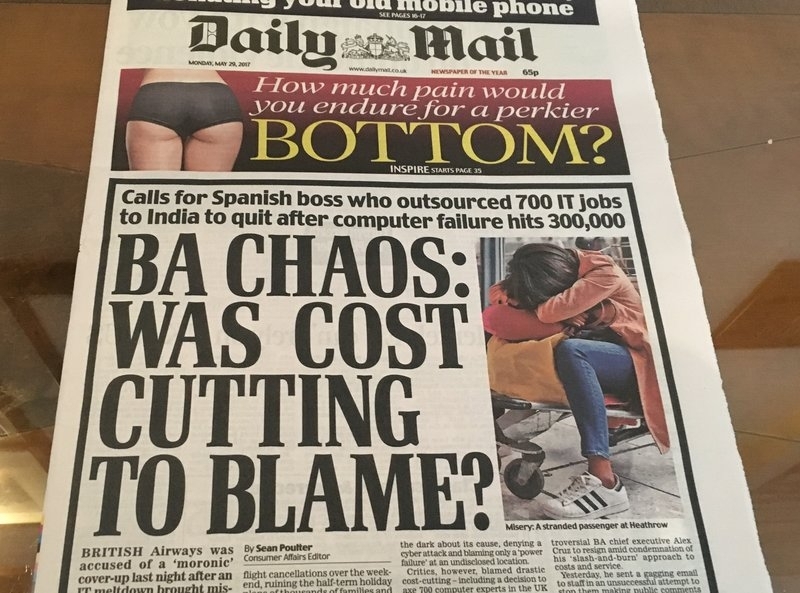 A few PR thoughts on the BA system outage

Last week we published something on HFP which, whilst totally innocent, inadvertently had the potential to cause us a PR problem if it had been publicised.  We shut it down quickly with a full and

I just sort of assumed there was nothing that could be done for passengers but it seems they wilfully screwed them over.

Not sure how papers like the Mail handle this. On the one hand jobs went to India so that seems like an easy win with the racists, but then it’s because of hard-nosed businessmen cutting costs etc so they don’t want to come off like commies…

Hmm. If this had happened just a week later (as in this Saturday) I’d have been totally screwed. Although part of me does want to be in one of those HOLIDAY CHAOS AT THE AIRPORT tabloid stories. Y’know sleeping on the chairs in the departure lounge sort of thing.

Oh god, let’s not even joke about it

Ah I dunno. I’m generally not that fussed about going on holiday so I’d trade it off against a full refund and the opportunity to get in the papers as ENTITLED ANGRY BRITISH HOLIDAY MAN.

why would you ever want to do that?

Dunno. Seems like as honest a rite of passage as any.

In reality I’d probably do the same but not if they’re not giving me my luggage back.

My friend is always SO worried about losing her luggage when she’s going on holiday. It’s just a good excuse to go shopping for a few outfits until your luggage is delivered 2 days later?

Funnily enough I have been in one of those stories but unlike the BA debacle it was completely down to extraordinary circumstances (i.e bad weather)

It’s one of those things that always looks quite comical on the news, but you’d be absolutely fuming wouldn’t you?

Or, as you say, just go home and get all your money and more back.

I wouldn’t mind my flight getting delayed by 4 hours though - Quite happy to forego 4 hours of a holiday for €600 compo or whatever daft amount you get.

but you’d be absolutely fuming wouldn’t you?

Wouldn’t be so bad if it was just your flight that was fucked, but when it’s hundreds of flights worth of people it’s going to be pure and total hell.

Wouldn’t be so bad if it was just your flight that was fucked, but when it’s hundreds of flights worth of people it’s going to be pure and total hell.

Yeah. There’s something about being in the mixer when it happens that sounds appealing from a distance.

A friend at work had her luggage lost 3 out of 4 flights in a row. One of them was a weekend away so I think she literally just picked her recovered bag up at the airport on the way home

But they were trying to weasel out of that by claiming it was caused by weather etc. Unbelievable.

I pity the fool who’s responsible for this.

(was meant to be a reply to the OP, not sure why it’s replied directly to DB)

Kid of irritated my careful tagging got rearranged.

Ah, bugger, I didn’t notice that. Now I look like some second-to-the-joke clown!

yeah i’ve had my suitcase lost LOADS. maybe five different times? just bought some undercrackers and a t-shirt. i’ve never tried to take the piss with it, but next time i might see how far i can push it.