Obviously delicious, versatile and dependable, but is it slightly overrated? Let’s discuss bacon and it’s vegetarian/vegan alternatives in this thread.

FAO @inthedusk I will now be adding emojis to these titles for your convenience.

I am only following the wise advice of @AutumnBeech (I think). Thanks for the emojis

I have nothing to say on bacon these days but past me insists on smoked rashers only.

Oh and This isnt Bacon tastes like anchovies to me. Not necessarily a bad thing.

It’s good stuff but could do without it really.

Great stuff, one of the best smells in the world. Still prefer a sausage butty

It probably is slightly overrated just because it’s often not done well. Always a risk getting a bacon sarnie somewhere and it’s floppy back bacon with rubbery fat.

But when it’s done properly, then per mouthful, it’s one of the most satisfying foods in the world. The smell! The salt! The grease!

Sometimes think about this absolute roaster (the none Oliver one) and his “bacon sandwich” and just sit there laughing: 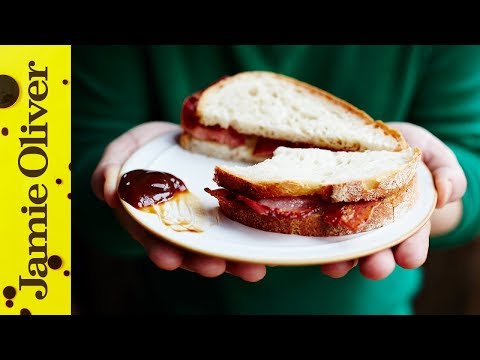 past me insists on smoked rashers only.

Nice to get back in sync with you after biscuit-gate.

Yes slightly over-rated as a thing to eat in and of itself, but makes it back by the versatility as an ingredient in a larger dish - so many things can be improved with a even just half a rasher of diced smoky bacon (or some pancetta, whatever) in the mix.

I think by overrated I just mean mainly that people bang on about it too much. “Ooh you’re giving up meat, but what about BACON?!?” “Ooh I’m hungover must have bacon!” etc.

One of the few occassions where Oliver isn’t the biggest arsehole.

Obviously I would eat and enjoy his sandwich, it just feels so arch, like surely no one actually prepares a sandwich like that, he must have been asked to come up with something ridiculous for TV.

My dad and stepmum put their bacon on a little tray and put it in the microwave and swear blind it’s the best way to cook it. Makes me want to burn their house down.

Angry about people banging on about food too much, are we?

Not a fan of smokey bacon

Bacon is brilliant. But the age old question:

Only when it suits me.

My brother in law has BBQ sauce in his bacon sandwiches but he’s basically an idiot.