Didn’t remember that Envy set clashing with Battles, but that explains why I don’t remember seeing Battles there.

Are they just Stanier and Williams now? Minimalist.

Hmm, are you saying that marckee is a liar? Seems like the only rational conclusion at this point

Still a really good band. Shame how much Juice B Crypts went under the radar

Actually, I don’t think it was Four Tet, as we went to the afterparty where he and Ivan Smagghe DJed. he was a busy boy that day, as he also played with Fridge.

I think we might have ended up at Andrew Weatherall’s set.

I don’t know AB at all. Seems to have done a lot of stuff so what’s the go-to album?

Yes obviously I was there too.

(I actually have no idea. I was at the first Field Day which was a total fuck up with huge toilet and bar queues and bands like Archie Bronson Outfit being stopped early for being ‘too loud’)

I’ve just dug out my ‘ATP’ shoebox to check, and Battles played two sets, one of which clashed with Envy.

Were they both on the pavilion stage?

Didn’t Battles and Four Tet do multiple sets that weekend? I think I saw Envy and Battles, but it was a long time ago and I was pretty pissed for much of it.

They’re really popular in Dublin and seem to love playing there (I guess because Dublin had such a strong math rock scene with Adebisi Shank, Redneck Manifesto, Enemies etc).

Saw them in the Button Factory on the Gloss Drop and La Di Da Di tours and both were packed and the band were in great form and loving it.

I think they were in the upstairs stage, not the Pavillion. Envy were on in Reds. Ah simpler internet times. When this was ‘a thing’ I remember the wait times for the GIF to upload before it played.

It ‘celebrated’ its 20 birthday a week or two back, I think.

EDIT: it was its 21st Birthday

Surprises me there is a single origin point of the GIF to be able to do that but I guess it maybe came off a magazine or something.

The game predates the meme: 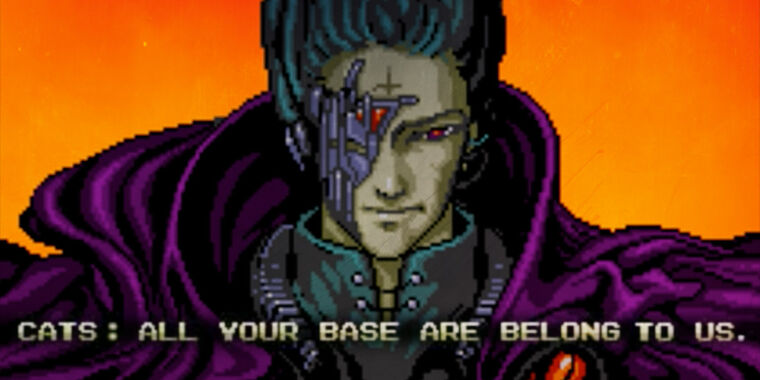 An anniversary for great justice: Remembering “All Your Base” 20 years later

Ian was having a nice time