As a London gig-goer I’m aware of the fact that London audiences are notoriously quiet but my favourite ever gig heckle was at the Queen Liz Hall back in the day at a Joanna Newsom show where, during a quiet, reflective moment between a song, someone shouted out, “what do you think of the pedestrianisation of Norwich city centre?”

Very few people got it and Joanna had a perplexed look upon her face but it made me chuckle.

Play some slayer! at a slayer gig. Rip

Natty at Thekla. Rubbish, rubbish gig. Total arsehole. Kept going on about how he’d come up with the tunes he was about to play (invariably involved smoking the 'oly ‘erb and tinkin’ about peace and love). After one tune some woman shouted out “WHAT’S THE STORY BEHIND THIS ONE, NATTY?”, to some titters. He of course took the question completely straight and proceeded on some incredible self satisfied ramble about meditating and making love and just generally taking it easy and the problems of the “PlayStation generation”. The room was completely underwhelmed. Leaned forward to tune guitar, smiled to himself and went “so I hope that answers your question”. After a slight pause she just went “…YEAH…” to a big laugh as the band rolled into another douchey reggae number.

Someone has told a brilliantly simple one on here before. Can’t remember the band, but the lead singer announces “We’ve got time for two more songs,” filled immediately by a call from the crowd of “ONE MORE SONG!”

So he’s an arsehole because he talks about where his music comes from?

Can I nominate myself?

Did that actually happen though?

I know back when he released one of the ones following harvest he played that through twice in one gig for shabs n bants but hadn’t heard of him doing that lately.

I think I know what this one is going to be don’t I?

Old one copied from a guardian article

"At a U2 concert in Glasgow, Bono asks the audience for some quiet. Then in the silence, he starts to slowly clap his hands. Holding the audience in total silence, he says into the microphone, ‘Every time I clap my hands, a child in Africa dies.’ A voice from near the front pierces the silence: ‘Well, stop clapping your fucking hands then!’ "

(There was a back story wasn’t there?)

I saw you two guys earlier at the Good Humor truck, and you were eating your ice cream like little boys, and I thought, ‘Those guys aren’t so tough! They’re eating ice cream.’ I saw you eating an ice-cream cone, pal… You’re bad now, but I saw you… That’s the shit you can’t hide. You eat ice cream; everybody knows it. Ice-cream-eating motherfucker, that’s what you are.

Lovely stuff. They were like on a higher level than the rest of the pub - it was a very odd set up. They played well though, and good stage banter (I think @shucks and Kelly swapped gaming advice?) And @colon_closed_bracket had my favourite ever heckle: “ENUNCIATE!”

Heckless for some light ‘banter’ between songs = fine. Heckless which are mean/trying throw someone off I have no time for. Just because you aren’t enjoying the gig does not mean others aren’t.

Some people probably like Nattys simplistic take on life, love, and politics and even if they don’t no harm done. Often the talking between songs bit is done to kill time while re-tunning and is pretty much the norm at most singer/songwriter or acoustic gigs

Quite enjoyed shouting “you are scientists” at We Are Scientists.

Actually, here’s a good one…

Fucking years ago when I’d not long moves to London and started working somewhere new, I was using kitchen encounters to have little conversations with people and tried to subtly find out whether or not we had any common interests. Well turns out one guy, Martin, was into similar-ish music, or American Indie at least.

At one point the conversation moved on to bands we’d seen live and he mentioned he saw Apples In Stereo not that long ago and was very disappointed in them. Apparently the sound was attrocious and despite everyone in the crowd shouting at them to do something about it, it stayed that way for most of the set. Not the sort of thing you’d expect from a band like Apples In Stereo. He ranted about it for a while, as he was a big Elephant Six fan and had high hopes for the set. I was a bit gutted as I think they were playing an upcoming ATP I was going to and I had been excited to see them live.

Anyway, fast forward a few weeks and I’m sat at my desk with my headphones on having a listen to their new album, when it gets to the end of track one and segues into a live recording of said song. In the live-segment ending, you can hear a crowd of British accents shouting things like “turn it down!” when suddenly one voice comes through louder than the rest with “everything’s feedbacking, can’t you hear it!?”. It was Martin. Made me jump out of my skin when it happened, proper worlds-collide, weird moment. 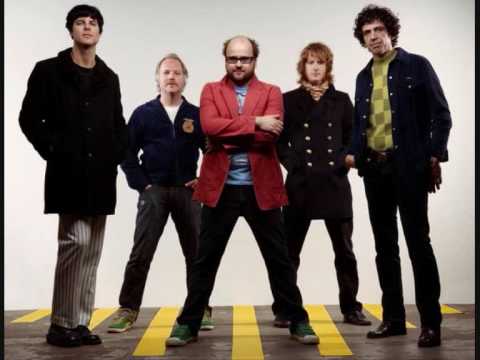