Do you have a bread bin? What you rocking?

There was an episode of Celebrity Gogglebox a while back where one of them had never heard of a bread bin and his mate was trying to describe the concept (not sure who they were, pop stars I think). Guess it is a bit weird in the abstract, at least since we don’t tend to use the word bin outside of rubbish bins (and GRIT BINS of course).

We don’t have a bread bin.

Yes, because we had a mouse for a little while.

Nice wooden one. Can’t remember where it came from.

Nope, nor do I have a Sodastream

I bought one after never having one and it’s too small but looks nice - small wooden one from m&S with a roll top opening. (Think I also got mine because of mice)

I would however love this old one I saw on etsy. Look at that font! 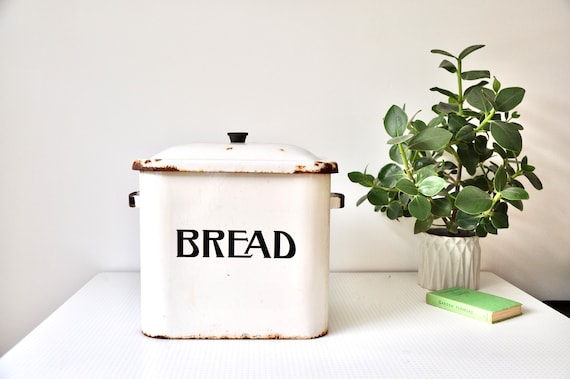 This large enamel bread bin is simply stunning. Full of character. I adore the shape and size of this one. This is a statement piece for any retro kitchen. Quite significant signs of wear including rust around the lid and edges which can be seen...

And I love this absolute babe.

Specified by us about a decade ago, this handsome bread bin is especially made for LABOUR AND WAIT by Riess in Austria. Its Red Oxide Brown colour is based on an original 1920s shade and the crisp white lettering is in our favourite Gill...

How are bread bins that pricey though?

Sometimes I think I should get one but not sure I have a use case. We don’t get through a lot of bread. The kids tend to have sandwich thin style things, which are in sealable packet. I occasionally buy a loaf a sliced white that is fine in the bag. We sometimes get a sourdough loaf, but we tend to eat half of that in one go then the other bit goes in tupperware until the next day.

Does a bread bin even keep your bread fresher than any other cupboard or container?

Are they a really British thing? Seems very British to have contrived a container for keeping half stale food in.

The bread bag is one of the cheapest, most significant life improvement purchases I’ve ever made

The fuck is a bread bag

Yes. It’s a hand me down, my mum asked for a new bread bin for Christmas a few years ago. It’s fine. Has a chopping board in the bottom that never gets used.

They’re probably more useful if you bake your own bread or buy it from a baker with no plastic packaging.

My parent’s bread bin has, tucked in the back somewhere, the feet of the marzipan figures from the top of their wedding cake, best part of 40 years old.

Anyone else kept anything longer in a bread bin?

Empty at the moment as we’ve no bread in

I’ve got this one, but mine doesn’t have writing on. It’s like a weird memory hole for food though. If I put items in it, I often forget they exist.

I have a potato bag but not a bread bag

Maybe it’s plain so you can write on it what’s in there.

Actually that might be a good concept, have a white board style top and marker pen so you can note what’s gone in and when.