Explainer (I’ve not read it though): https://rationalwiki.org/wiki/BreadTube

Anybody up on the Contrapoints/Buck Angel blow up recently? Things like this always make me feel way out of depth in terms of understanding (you’ll have to look on twitter for that one)

This is a serious thread, btw. RTF

Best response to above controversy:

The cycle repeats... Contrapoints says/does something that draws some serious, genuine concern, Contra (and now Olly as well) respond flippantly and then comes a deluge of unconstructive criticism. It's distressing to me to confront, but here are my thoughts: <thread>
1 Like
zxcvbnm2 21 October 2019 15:53 #6

Seen a couple of Contrapoints videos and she seems decent and less annoying than most YouTube essayists. Is the stuff in that thread juicy enough for me to bother with?

Only if you’ve watched her most recent video.

thought the thread would be about these

Pretty big fan of Contra, think some of her initial tweets on this latest issue (if it’s the one I’m thinking of) seem very reasonable and unobjectionable (but obviously from my very narrow POV), but wouldn’t be surprised if she got combative and said something else a bit more controversial later on.

Also going through the tweets you posted, I think this one is the heart of the matter and something “The Left” could do really well to remember generally - without it we just get back to the left-eats-itself problem (as in I think we should nearly always take the positive 450 in that scenario)

I'm still of the strong belief that Contrapoints is a huge net positive, but I acknowledge that a lot of what she say perpetuates some harmful ideas to a lesser extent. Encouraging class consciousness? 500 points for Griffyndor! Clumsy, unearned attempt at reclaiming slurs? -50

So, do we take the positive 450? Or, because she is unapologetic for her sins, do we throw her out entirely? And even this clumsy example here relies on the premise that we can quantify these kinds of things. I don't actually think we can.
1 Like
wonton 21 October 2019 16:03 #15

Yeah, that one stood out to me as well. The general point of “criticise her platforming choices by all means, but does that mean her activism on trans issues is entirely invalid?”

used to watched contra, but can’t handle youtube videos that are 45 minutes anymore so stopped

saw something about her explaining in her next video 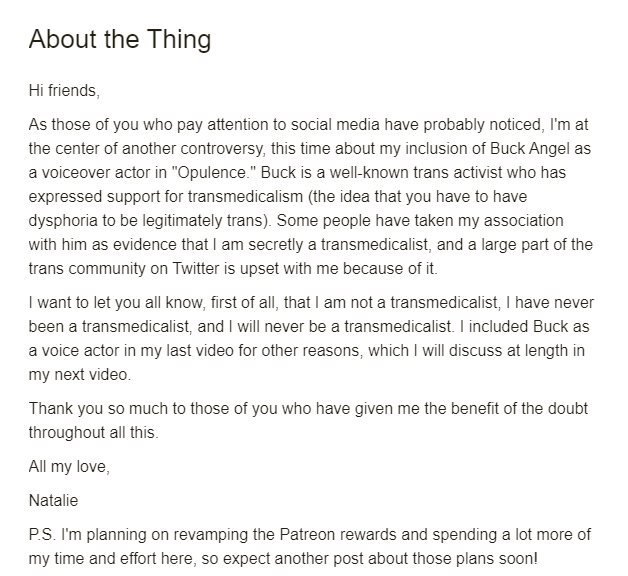 Wouldn’t surprise me if the next video is on “cancel culture” (ft. Limmy)

Quite into BreadTube, I think I’ve probably watched most of the “big names”. Like PhilosophyTube, Contrapoints, Cuck Philosophy, Anarchopac, Angie Speaks etc

I can see there’s clear issues associating with someone like Buck Angel who seems to have some fairly reactionary/essentialist ideas around what it means to be trans* but on the same note regarding her opinion of nb people they seemed to come from a fairly personal perspective which doesn’t appear to map onto her actual beliefs.

I kind of identify with her slightly off brand of comedy since I get the feeling she comes from a similar background as me as far as being involved in online image message-boards and whilst I don’t really identify with that anymore, I can see how she’s essentially using the same humour to provoke people which leads to the same sorts of responses it did back then.

The problem for me is that when you boil it down to that phrasing, it’s so obvious to me that it almost doesn’t need asking. That’s likely just because I can look at it from a remove, whereas I’d feel a lot more affected if I was non-binary and thus felt actively let down by what she might have done wrong.

Am I supposed to disown my parents because they're transphobic? Am I only allowed to associate with people that have pure, healthy beliefs? Conversely, is it conscionable to associate with someone with flat-out Nazi views? Where the is the balance between outreach and complicity?

To me those three answers are (easily) no, no, no. And then I can’t quite see why someone would put so much thought and concern into those topics that have simple answers to me.

But there’s also my falling out of love with philosophy and analysis to contend with, so I’m pretty biased all round here.

This post was a whole lotta nothing eh? Basically, not having heroes is good, not letting your favs get away with crappy stuff is good, but it seems to me that Left figures get cut down for the smallest issues at the moment (not that this is what’s happening here, I don’t know enough about it, just a general point), to the point that it’s totally impossible to be seen as an advocate for anything without some other misstep coming in to ruin your good work.

only really get my opinions from myself and other DiSers tbh.

It can be very fun and interesting if you note their biases and that they’re just getting to tell you their views for 30 uninterrupted minutes.

Is that a yes to “Am I supposed to disown my parents for being transphobic?” I feel like I couldn’t say yes to that myself…which is what I mean by feeling out of my depth.