I’ve had this very badly lately, can have 1 real coffee first thing but then decaf only thereafter.

Looking online (lol, lmao) it seems like coffee does very little to actually trigger this and it’s all in my head so that‘s amazing - do you guys have any tips or am I doomed to be the world‘s least convincing David Lynch extra?

During my masters the campus coffee machines made strong cups for 10 cents (!!!)

I drank so much I could see through time at one point. Just laid in my bed struggling to understand time passing and also my colon.

Been strictly one cup a day since.

Yeah I’ve really tried to cut down recently cos I was finding work challenging, I don’t generally sleep very well, and I don’t think all the caffeine was helping with either of these.

I’ve gone from 3 cups a day to 3 cups of half caffeinated / half decaff and generally feel much better, less anxious and don’t feel so constantly defeated. Aware correlation =/= causation but also it hasn’t really had any negative effects either.

Even decaff makes me feel this way depending on how the decaff was prepared (bleaching or boiling or whatever the methods are), so what you’ve read is BS imo as I can drink coke and tea and other caffeine-containing drinks in large quantities and it has no impact on my anxiety whatsoever. Coffee is the one.

However, it doesn’t always happen so must depend on other factors - maybe it’s accumulative. Idk. But on the days it kicks in I feel like I’ve taken a load of pills, and the anxiety actually gets worse not better over many hours but I clearly have a sensitivity to it (from what I remember in my tea shop days other drinks that contain caffeine usually have up to three other stimulants that seem to somehow make the caffeine in tea or whatever be more gentle in the way they react to one another)

I’ve started drinking coffee again this year but only once in a while, I’ve had a few quite bad reactions so I just know to only have it now when I’m already feeling pretty ok.

I suffered from a massive anxiety attack due to coffee and had to completely stop drinking it as it was so negative to my mental health. Even before the anxiety attack I felt like I was in a rollercoaster with energy levels and mood. Can only drink decaf tea/ herbal tea now, can’t even drink decaf coffee as there is still too much caffeine in it. If I want to get really buzzed for 45mins I can have a diet coke, but even then I can’t have it regularly because it starts to get addictive, like one a month is okay. Also, when I quit coffee/ tea the headaches took weeks to get through. Seriously hard work.

yeah i had to give up coffee years back for this reason. im a trembly anxious mess at the best of the time but add in fags and coffee and well, im a total mess! felt so much better after giving it up. HAve a cup every so often to remind me that im just not built for it. Not sure if its coffee or caffeine to be honest though

I had this badly and so just cold turkey quit. Don’t regret it at all.

probs drink about 8 coffees a day. Reckon I am anxious/on edge with or without coffee tbh

i think it defo increases anxiety if you have too many, but i also get the same feeling from not drinking enough water

my advice is one pint of water at least per coffee

I have to really overdo it to get physical symptoms from caffeine these days. Just immune to the stuff. I blame three kids and 15 years of night shifts for my tolerance levels.

In response to the OP though… caffein may not directly cause anxiety, but can replicate the physical symptoms of anxiety - high heart rate and gut activity. If the heart rate goes really high it can cause reap rate to go up too. If you’re an anxious person then it can be a bit of a chicken/egg thing in that the physical symptoms can trigger the emotional response.

Doctors regularly advise people to reduce caffeine intake if they are suffering from clinical anxiety as one of the suite of lifestyle changes alongside talking therapies and medication.

Five cups of tea before one o’clock and nothing after is my rule.

I can’t drink coffee at work as it puts me too in edge and makes me v anxious. Just have a coffee for pleasure at the weekend now

L-Theanine is supposed to have a synergy effect with caffeine where it enhances the positive aspects and reduces the negatives. I take a combined tablet everyday in an attempt to self medicate, think it helps me focus a bit not drastic but haven’t felt any negative effects and i’m quite sensitive to caffeine, makes me sleepy at first then seems to keep me awake hours later 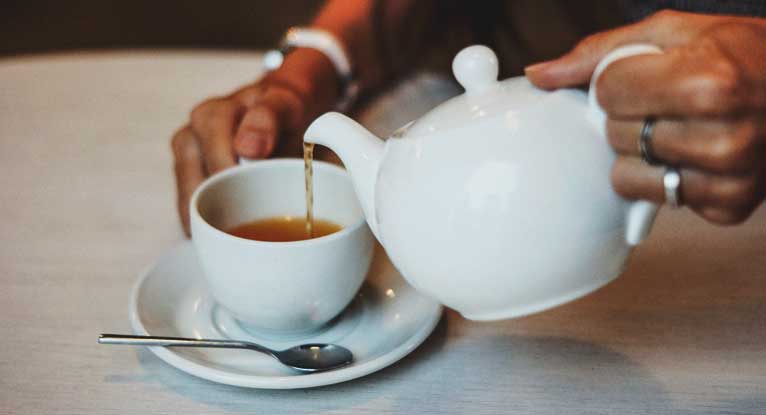 Studies suggest that L-Theanine may improve sleep and reduce and anxiety, but before trying it, learn its possible benefits and risks.

hate stuff like this ‘a small study found…’ do a big study then, really need big holland and barrett to take on big pharma

I’ve always had social anxiety. It’s a lot better now in my thirties than it was in my twenties or teens. I think the stress I suffer with now has sort of elbowed it out, idk.

Only mention this because coffee anxiety feels completely different to that or general anxiety. Feels more sort of like the feeling off a line of coke. It’s simultaneously pleasant in a way to be buzzing around, but also pretty rough.

I only drink decaff during the week. If I have a day off I’ll have the proper stuff, but not after midday, and one, max two cups. A few weeks back I got up on my day off and had three large non-decaff coffees and was absolutely wired. Read the New Statesman cover to cover, Doubtfired the whole flat, then just lay there thinking I might have a heart attack for hours.

Get really sweaty when I have a coffee.

I just have one cup in the morning - oddly feel like the few hours after are my least anxious times, and then late afternoon I’m overcome by the usual wave of horror. Think coffee if anything helps me momentarily compartmentalize and block out reality. I’d like to have more but I’m too worried about screwing up my sleep / increasing my tolerance / feeling like shit.