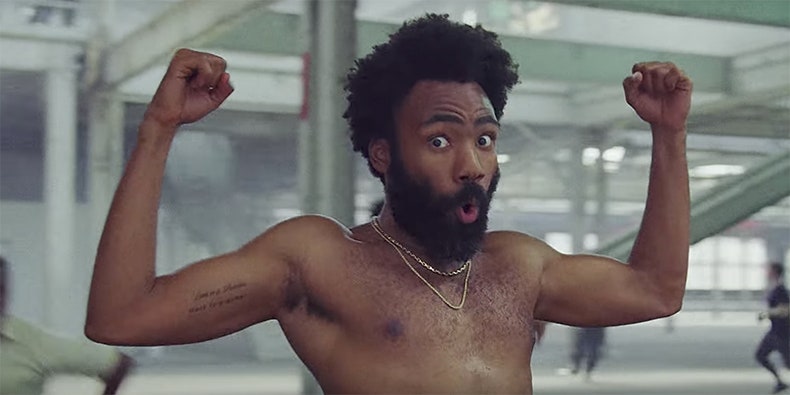 Watch Childish Gambino’s Video for New Song “This Is America”

Not a huge fan of Childish Gambino but this video is pretty damn effective. Song ain’t bad either!

Dunno why but his attempts at rap always come off as so insincere and derivative. Marginally better than the stuff on his first couple of albums but still pretty basic and pretentious at the same time.

Video is good though. And Thugger on the outro is nice.

So much this - I find it really hard to get my head around. A great guy, great writer with great production/instincts etc - but something’s always missing when he raps.

This is a great video. Not hugely knowledgeable about his stuff but I quite like the song itself.

Never really got into his rap/music but this is great

This mean Childish Gambino has like, two good songs now? Kinda crazy that he’s headlining festivals based on that (guess that’s what happens when you’re Lando).

song is better than any of his other stuff ive heard, which i liked but didnt love. video is fucking great tho eh

dangerous night is a banger, although admittedly i thought it was a song by a Swedish house mafioso until i discovered otherwise

Love how the DiS hivemind gives the most talked about song/video since-God-knows-when a total of 14 replies. Either we’ve transcended all types of cultural significance or we’re all utterly irrelevant. More (or less) please!

All feels Kendrick-lite to me. Love Glover as a guy and a writer but still don’t buy him as a rapper.

Haha it is a bit strange.

I love it, but I don’t have anything more to add. I think its’ greatness speaks for itself and there are not any hot takes required - especially from a forum that mainly consists of white british people.

Another one, almost breached 20 now.

For the Love of God, Don’t Meme Childish Gambino’s ‘This Is America’ Music Video

You're missing the whole point.

I think the music boards are a product of their time. They were the logical evolution of music magazines of the early 2000s, and now if people want to voice their views on something they’ll do so on Twitter and under the YouTube video. Its like how people at work are moving from email to working in Slack and Whatsapp. Long form communication is less popular and necessary. I also recognise many of the bands talked about on here still, whereas on festival posters and Spotify, that’s not the same, so maybe the music boards themselves are tied to a specific era? Could be wrong, Sean may have data and article hits that says otherwise.

The Social boards have oddly become more important and embody the tolerance and positivity of the place now, in a sea of internet hatred. The music boards to me now just seem like a subthread within those.