Oh right, that’s wild but then it wasn’t until years later I found out that Titan books was basically just Forbidden Planet so I guess all very small time.

You’ve reminded me I should get those early Slaine and SD collections. 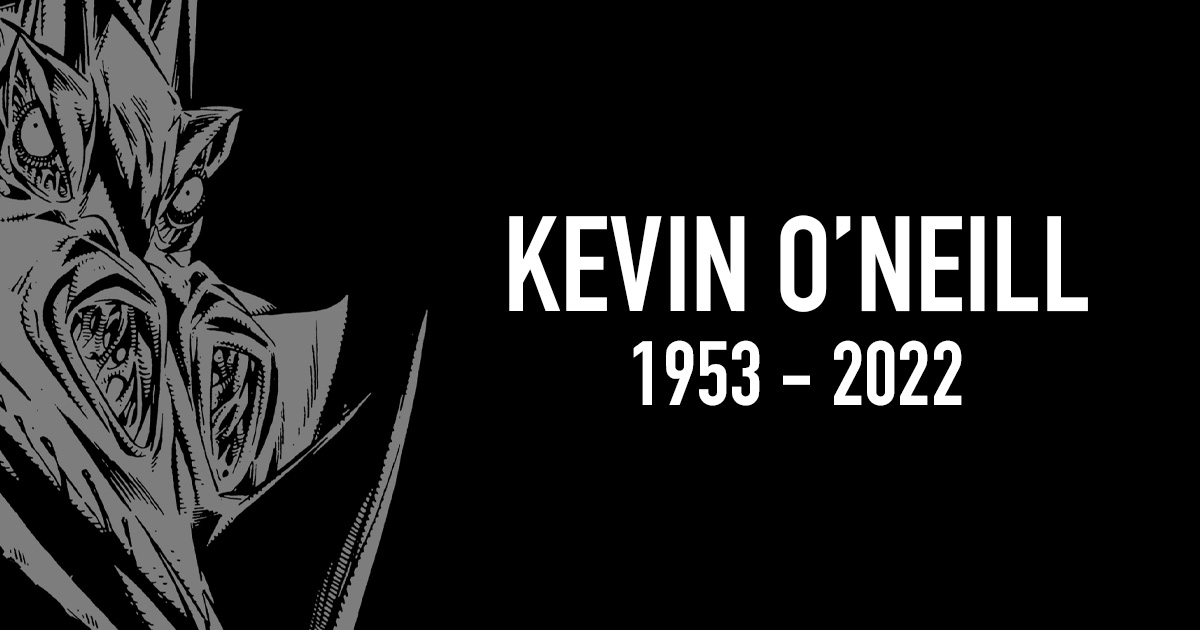 Everyone at 2000 AD is devastated to learn of the death of artist Kevin O’Neill. Words like ‘unique’ and ‘genius’ are not uncommon in the pantheon of 2000 AD creators, but no-one deserves them more than O’Neill, whose innovative, iconoclastic,...

Fucking no…
my favourite comic artist ever. Incredible, incredible talent.
Reading Nemesis aged 14 at a catholic school really helped make sense of things.
Queued up in Gosh! years ago to get this signed by him and Pat.
Gutted. I wrote this piece for Facebook back in 2016, to celebrate Kevin O’Neill’s achievements in the comics industry. You can read my obituary on Kevin here.

Working on the black comedy novel Read Em And Weep with Kevin O’Neill, which deals, in a fictional way, with the origins of the Comics Revolution, including the creation of our version of 2000AD, I was suddenly struck by a somewhat uncomfortable thought. I hope I’m wrong in this, and – if so – perhaps some readers can put me right and I will be most happy to stand corrected.

At lectures, conventions, masterclasses and interviews, I endlessly make the point that after the creation of 2000AD and the creation of Judge Dredd, the third most important event, and in some ways the first, was Kevin O’Neill sneaking credits onto 2000AD. This changed the world of British comics overnight, which I’ve banged on about so much I’m not going to repeat myself here, other than just to underline it for people who don’t know about those dark days. If it wasn’t for Kevin, no one would know Grant Morrison wrote Zenith. No one would know John Wagner wrote Judge Dredd; that Carlos Ezquerra drew it, and so on. Nope. Yes, it might come out within the industry but not in any significant and important way. And creators would not be called to account if they were writing or drawing crap, or praised if they were brilliant.

And the uncomfortable thought struck me – does anyone else give Kevin this acknowledgement? I know you fans do and I love you for it, but I’m talking about fellow creators. Because if they haven’t, it’s about time they did. Or am I the only one who gives a shit? If others just take it for granted, or believe it would happen anyway, please let me put you straight. It’s only now that the Beano are giving credits. FFS! In 2016!!

Kevin only mentions his achievement when he’s questioned and does not bang the drum for himself and I’m getting just a little tired of being a lone drummer, assuming that I am. I’m sure Rebellion must have banged the drum for him, but just in case they haven’t, I’ll send them a copy of this. It’s the kind of thing their publicity department needs to know about, if they don’t already.

Because all of us, no matter how high up the greasy pole we may or may not be today, owe him a massive debt and it seems appropriate with this 2000th issue to mention it again, in case no one else does.

I think what gets me out of my pram is the being taken for granted thing.

Just like the second generation took for granted the rewards of the vicious fights the first generation of us had with publishers for a proper slice of the pie. Fights that got into serious shouting matches on occasion. I know I wasn’t the only one here and, like my equally aggressive colleagues, I don’t believe in middleclass niceties when I’m being ripped off. Thus, one publisher had the misfortune to be stuck in a car with me between London and the North, when I discussed royalties at length with him in my usual less than subtle way. By the time we got to Newcastle, he reluctantly agreed to give us creators a better percentage. It was a miracle we didn’t crash. Subsequent generations of creators are notably more acquiescent, as far as I can tell. I totally understand this, as the dark shadow of Thatcherism made everyone realise they had to go back to doffing their caps to the bosses once again. In my case, I’m beyond salvation.

Anyway, I’d love to know that other creators of my and the subsequent generation have acknowledged in some form or another what Kevin did for us all. Because he seriously put his arse on the line, guys. Technically it was a sackable offence and if the publisher had known what it would lead to, Kevin would have been in deep shit and probably punished by transference back to the dreaded humour department.

In our novel Read Em and Weep, the humour department is described as a kind of Colditz prison. If you don’t know why it’s like a prison, the explanation is in our book (out in Feb). In the meantime, don’t mention the words ‘Whizzer and Chips’ in my presence. And definitely don’t say you liked Whizzer and Chips. That’s a private pleasure I’d be grateful you kept to yourself. Because you don’t want to hear me bang on about how badly served artistic geniuses like Ken Reid and Leo Baxendale were treated in that terrible gulag of anti-humour known as the “”””””fun””””””” factory. Also you wouldn’t understand what I’m talking about if you genuinely enjoyed Sid’s Snake. I will still remember you in my prayers. I did a year’s stretch on Whizzer and Chips, Shiver and Shake, Cor! and similar rags and my stories were regarded as the most popular – yet I still cringe in shame when I recall many of them. And I still want that year of my life back!

So with that off my chest and my rant over, I raise a toast to Kevin O’Neill who changed the British comic industry forever! Cheers, Kev!

finally got a new comics reader on my ipad after i realised all my old comics were trapped in a broken app, so will downloading all of these as i have a fresh slate at the moment!

Manilla occult detective dealing with the political difficulties of multiple spirit ‘tribes’ who are in an uneasy alliance, along with corrupt cops.

yes. if you’re a hellboy fan, with that kind of quite muted dialogue that occasionally goes nuts, you’ll be really pleased.

Carlos Pacheco has died aged 60. That’s very sad, one of the few who’s 90s art looked both incredibly 90s and incredibly good. He’d toned down a lot in recent decades, but I always loved seeing his stuff in the 00s and 10s, really dynamic and had so much depth and dimension to it.

Seems like so many big names are passing recently.

So true. Gary Leach, Kevin O’Neill, Alan Grant, George Perez and Neal Adams were all responsible for my golden age of comics in my teens. Now they’re all gone this year.

Finished Ducks. Made me tear up once a chapter or so. It’s cosy and cute and funny but also just devastating. (This means I liked it)

Dunno where to post it but here feels the closest. Worst.

some nice tributes from Bill Sienkiewicz

DC Pride 2022, featuring a story by Kevin Conroy, is free to read in light of his passing.

Kevin Conroy recently contributed a personal story to DC's annual Pride Anthology, illustrated by J. Bone and lettered by Aditya Bidikar. The entire DC PRIDE 2022 anthology is now free-to-read for fans in tribute to his impact on us all. He will be...

just coz i’m tryna get a few followers and promote it… i did a thing:

Hi all. Sorry not sorry for Jag. Had a bit of a thought a week ago and now here we are **Video is here ** Basically a (probably) weekly-or-so effort with me doing all the music and writing, my pal in Chicago doing the art and my mate Helen singing. Here’s our band, Wonton Destruction [image] Imagine Gorillaz but no rap section and I’m doing all this with a budget of £0. Following and sharing and etc would do me THE biggest solid. ILU. GossipXylo xoxo