i doubt we’re gonna get a cc hgatr so here we are. counting crows are a band i truly love but have never felt the need to defend on here. a lot of people were trained to hate them cos duritz was kind of a putz and he had the hair and earnestness that rubbed folks the wrong way. plus he dated all the hollywood baes of the time and jealousy got the best of folks. on top of that… after their creative peak had passed, they decided to release one of the most annoying cover songs ever recorded with big yellow taxi. a truly remarkable stain on their legacy. so a lot of people only know that song about them (which tbf would be enough to turn me off for life if that was my entry point).

august was one of the first ten CDs i ever bought (i was 12) and it’s stood the test of time, sounds just as good to me now as it did then. one of those cds that i have every note, every sound and every lyric memorized. the sophomore album is every bit as good and, amongst counting crows stans, its hotly debated as to which is better. think of these like the blue album vs pinkerton type of thing.

so let’s poll and discuss two of the best rock albums of the 90s. beyond @TAFH33, i know dis has more counting crows fans hiding in the corners…

Pick your top 3 from the debut:

Pick your top 3 from their sophomore album:

if you hate counting crows for reasons beyond duritz’ vocals, earnestness, hair or the taxi song… i’d be interested to hear them.

There’s probably a case to be made for this desert life being their best but the first two and kind of burned into me…across a wire was my introduction to them and I love it.

August is the best of the two but screaming along to recovering the satellites is a lot of fun on a bad day. Plus it has two songs that are better than anything on August in the title track and Children in Bloom.

His voice is amazing and there are absolute gems across the whole catalogue (along with some stinkers obvs). Plus they are absolutely smoking live.

There’s probably a case to be made for this desert life being their best but the first two and kind of burned into me…across a wire was my introduction to them and I love it.

yah desert life was good. hard candy had its moments too. i liked about half of somewhere under wonderland as well.

I don’t think I’ll ever be able to pick between August and Everything After and Recovering the Satellites, they’re both masterpieces in their own way. Basically been debating that for 24 years now.

Limiting to three is brutal. I’ll probably I’ll always be switching between Perfect Blue Buildings and Rain King, but opted for PBB this time because it’s really next level songwriting (and because I can’t sleep ever).

I know @JohnM has August and Everything After on the HGIIR at least.

Love the difference between Adam Duritz’s performances on the two albums. Both are very much centered on his personality / his life obviously, but on August and Everything After there’s a certain restraint to it whereas on Recovering the Satellites he’s front and center and it feels like he’s going to jump out of his skin. Don’t know how anyone could listen to RtS and call them a dull band (even though it’s one of the most emotionally exhausting albums ever written).

Not at the moment but you never know!

I absolutely love the first 3 albums and half of Hard Candy, (TDL is my favourite album of theirs), but they’re probably the worst band I’ve ever seen live - definitely the most frustrating. I appreciate when bands change things up a bit when they play their songs live but every version they played when I saw them bore very little resemblance to the originals, it was all jazzy, scatty freestyle bollocks when all everyone wanted to do was hear the proper versions and sing along a bit. By the end everyone around us was really pissed off. Put me off them I’ll be honest.

When he’s on, I’m really not sure if there’s a better lyricist.

Well, I got bones beneath my skin, mister
There’s a skeleton in every man’s house
Beneath the dust and love and sweat that hangs on everybody
There’s a dead man trying to get out

I love the way his mind works. He just gets it.

Agreed. I’ve seen them twice and there were some really nice moments, but with songs as perfect as Round Here and Rain King you can’t start doing the jazzy, scatty poetry thing.

Big fan here. As I said in the music league thread, the first two albums are among my favourite ever music especially August… which is probably my most played album. It probably helps that I have strong associations of that album with a good point in my life so it’s hard for me to judge it purely on the music but even so, those are some damn good songs

I’ve never seen them live but I’ve heard live versions of the songs and even without the jazzy freestyle bollocks, Duritz changes the melody so much that I thought it must be really frustrating to see that live when all you want to do is have a singalong to the songs. I’ve seen CC fans justify this by saying that Duritz doesn’t work out a precise melody and the way he sings it on record was just the way he sang it that day but I’ve heard live performances and demos from before/around the time of the release of August… and those sound pretty much the same as what’s on the record

Recovering the Satellites the song is a masterpiece too, I’d put it as one of their few best. Love the way the verses swell into the chorus, and how he suddenly hits you with brutally direct or personal lines. That “I wish that you were mine” is an all-time gut punch moment. 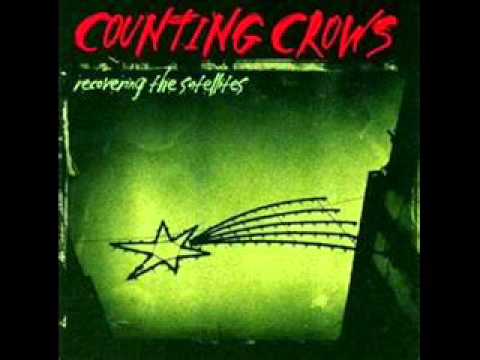 I know the earnestness puts some people off, but there’s something so relatably human in his lyrics and general mindset. He’s able to capture the essence of life-defining moments, whether or not you know how significant they are at the time.

That must have been a really good two days, stumbling upon the perfect melody 10 and 14 times in a row.

Ha, yeah, I’m willing to believe that he doesn’t work out the melody note for note like some singers do and he does give himself some leeway especially in the more ad-libbed bits on Recovering The Satellites but on some of the live versions I’ve heard the melody is so different it must be that he’s just got bored of singing it the way it is on the record and wants to change it up. Which is fine for him but I imagine very annoying for people watching

I mean he did warn us early on that he wanted to be Bob Dylan, so…

Probably cause I got into them through live versions but for me they’re the definitive versions of the songs. Anna begins on the storytellers set is so good…