Did you know Turkey changed its name to Türkiye a few days ago? 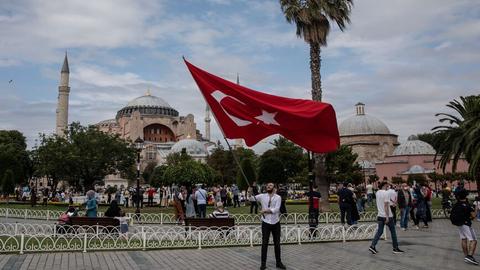 Why Turkey is now 'Turkiye', and why that matters

Turkiye's authorities have decided to rebrand their country's international image, here is why.

“The word Turkiye represents and expresses the culture, civilisation, and values of the Turkish nation in the best way,” said the communique.

I didn’t, just wondering if this was me being naïve or if this just hasn’t been reported on much.

So is it Turkiye or Türkiye?

Don’t a lot of countries spell / pronounce their names differently to how we do? Obviously CCCP was never “Soviet Union” - indeed anywhere that doesn’t use the western alphabet is going to have differences

Wasn’t there talk of New Zealand reverting to its Maori name too?

Don’t a lot of countries spell / pronounce their names differently to how we do?

Yes, and I’m not sure whether or not you’re on the windup with this reply and I’m about to get Wolfcastled.

I was wondering this too. The few articles I’ve read about it vary between the two, making me wonder if Türkiye is the name for the country in Turkish and Turkiye is the Anglicised name. That’s just an assumption though.

Yeah, to Aotearoa, which hopefully ends up happening.

Yeah quite a different situation with that one. I’ve got no issue using Turkiye, and think it makes sense to pronounce place names as close to the local version as possible (although there might be disputes around what that is). Shame that in this specific example the assertion of the Turkish name comes wrapped up in the whole context of Erdogan’s regressive nationalism

Maybe England could do the same. just cut to the chase. Englondon

That’s exactly it. Have just messaged some Turkish friends this with that exact question.

I was not aware of that.

I did know but I didn’t really understand it to be honest.
When I was in Turkey a man came up to me with a suitcase full of switchblades he was trying to sell, and that’s my ongoing memory of the place.

Oh and that the tea was free but the water cost money.

I like the fact that the Czech Republic gave themselves a snappy new nickname a few years ago (Czechia) and literally everybody has ignored it.

I messaged my Turkish pal about this earlier to check if its something I should respect, or something that the right wing government came up with and is being widely mocked in the country like Czechia was. Haven’t heard back yet but presume the latter.