Yeah I am honestly not sure why there are warlocks and sorcerers TBH. It feels like two sides of a very similar coin.

You think so? I just read up on warlocks as I didn’t knkw how they worked, and they seem to function a lot differently (other than both relying on charisma) to sorcerers and have a very different character vibe with the differences between what various sorcerous origins give you versus the patron things with warlocks. Pretty different spell lists too! (obvs though you have played tonnes more than me, so maybe in practice these things don’t work so differently)

Yeah, I bought PHB on dndbeyond as it makes it so much easier to fathom in my character sheet for a n3wb like me.

Interesting what you say about multiclassing as well. I’ve started thinking about a future character I’d want to play, and it would make the most sense for them to be a multi-classed bard/cleric. But I’m thinking that purely from a role play perspective so probably doesn’t actually work for game play?

Ah well I am just thinking from mechanics I suppose, both quick builds are very similar, both charisma then con.

Spell lists… So they probably are very different but certainly in the case of the Warlock, you’re only picking 2 spells and TBH there are usually just a few high performing spells you pick and then you leave it.

Probably not explaining that well but I’d imagine 90% of 1st level Warlocks will have the same two spells. This could just be my limited view of course, because I am normally maximising my combat effectiveness for any character I build.

Equally, I meant two sides of the same coin considering there are Clerics, Druids, Wizards and then even Bards going big on magic. 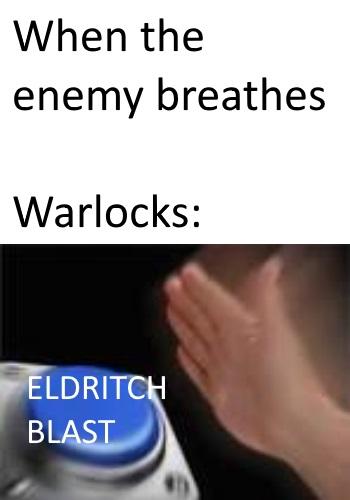 Anything can work I reckon. Clerics tend to want good melee skills because they have almost nothing that returns on a short rest whereas most classes seem to. So they tend to need to be good fighters to offset this.

I played a crap-at-fighting one and I didn’t really feel I was fully pulling my weight until 5th level. Before that I was just “Toll the Dead guy” (a Xanathar’s offensive cleric cantrip that can do 1d12 to injured baddies).

Bard would give you lots more options.

But yeah cantrips are also pretty firmly set (blade ward being the other popular one).

I took this as one of my first level spells

Ran a simple little scenario for my nephew and his parents last night. He was updating the characters this morning with the level up and it reminded me about ability scores.

I generally reckon that if your main ability score is a 14, 16 or 18 etc. then using the +2 to get it higher will be the best option. But if it’s odd-numbered and there’s no obvious other odd-numbered ability score to increase then there are a bunch of feats that give you a +1 to a single ability score and then some special abilities

I can’t do digital/PDFs. Love my physicals way too much. Bought a 5E Player Handbook and the Crit Roll Explorer’s Guide To Wildemount expansion to use over Roll20 lockdown games and some other non-D&D game books besides (Monarchies of Mau and SLA Industries 2.0 that I Kickstarted in 2019 that just fulfilled, yay!)

MY FAVOURITE (I am so close to coming up to date)

But yeah, I bought the bundle in the end - having my character sheet on dndbeyond makes it really helpful as the new spells and stuff show up automatically.