per sport that you followed while you were young

Football:
I vaguely recall watching the France 98 final but can’t remember anything about watching it. Earliest I can properly remember is Man Utd - Juventus in the CL winning season, with the last minute Giggs equaliser. watched with my auntie and uncle who had no interest in football but happily humoured me, played footy with me in the park earlier the same day.

Tennis:
Hingis - Graf French Open final in 1999. think I was at my nana’s. remember Hingis being a brat and I have a false memory of her cheating by hitting the ball through a hole in the net and claiming it went over. Think Agassi won the men’s final the day after, can’t remember who against

Athetics:
Cathy Freeman winning 400m at Sydney 2000 I think. can’t remember anything else about that Olympics. went to the Commonwealth Games in Manchester in 2002

Snooker:
watching a Williams - Hendry match also at my nana’s. might’ve been 1999 World Championship final or might’ve been later, not sure

F1:
Used to watch with my dad and I supported Schumacher cos I liked the colour red. remember him losing a race or maybe the championship to Hakkinen and me crying

First football memore I have is Cantona scoring that goal in the FA Cup Final vs Liverpool aftrr James flapped at it. Distinctly remember the commentator saying ‘you couldn’t write/script it’ cause in bed that night I tried to write it in my head

Vague memory of France 98 because of the ham they had on sale in the supermarket, think I saw a bit of the final too.

Staying up late to watch Steve Redgrave get his fifth Olympic gold - I’d done a 30+ page project about it for school (everyone else did like 5 pages but I was one of THOSE kids. My mum was involved in making it look nice and giving me clippings)

Honestly not sure what my earliest definite football memory was. Maybe the Chelsea game where Ed de Goey got injured and I think Cudicini went in goal? I know this because aftee the game was over I went up and played the Tonka PC game while thinking about what an odd surname de Goey is. [Google tells me this was 9th December 2000 and it was a 4-1 win for Chelsea over Derby County.]

I remember watching Maradona’s Hand Of God happen on TV as a six year old. I was watching football before then, but I can’t remember anything definite - just vague feelings of Liverpool winning matches.

My dad always used to watch Wimbledon and I can remember watching the 1986 final (Becker v Lendl). Looking at the dates, this was on 6th July 1986, which was only a couple of weeks after the Argentina v England match in the world up.

I can also remember scenes from the Edinburgh Commonwealth games too, which were held at the end of July and beginning of August in that year.

Football: not sure. WC94 was the first tournament I remember. Definitely watched games before then however.

Athletics: Christie at Barcelona I think too

Football: Liverpool 4, Newcastle 3 in 1996, the game that essentially handed the title to United.

NFL: the 2006 Superbowl, specifically Devin Hester returning the opening kickoff for a TD.

Gazza’s goal v Scotland at Euro 96. That whole summer of collecting the petrol station silver coins etc was the start of it all for me I reckon

Might be mixing up the coins with 98 world cup actually

Keen surveyor of the wonder goal even at an early age.

Earliest memory, sporting or otherwise, is euro 96. I was 4 and a half and feel like I remember bits of it vividly. But dunno if that’s me remembering memories, rather than the event itself, IYKWIM

Sitting by the radio listening to Brian Tinnion scoring a volley against Liverpool in the FA Cup at Anfield in 1994 for Bristol City to win 1-0.

Just remember how happy I was, still better for me than when Bristol City beat Man Utd a few seasons back in the League Cup

Italia 90. I don’t remember watching the games, I probably wasnt old enough to stay up (I was 5), but I remember getting to school and parroting what England needed to do to win the World Cup. “If they win their next game they’ll be in the quarter final, then if they win the next game they’ll be in the semi final…”. When we got knocked out I wasn’t too bothered because I decided we’d probably just win it next time.

very blurry memories of world cup 94 - specifically this keeper’s kit and something involving a man dressed as a cowboy playing football (I guess it was some half time light hearted bit) - but I was 3 coming on 4, so not sure it counts. 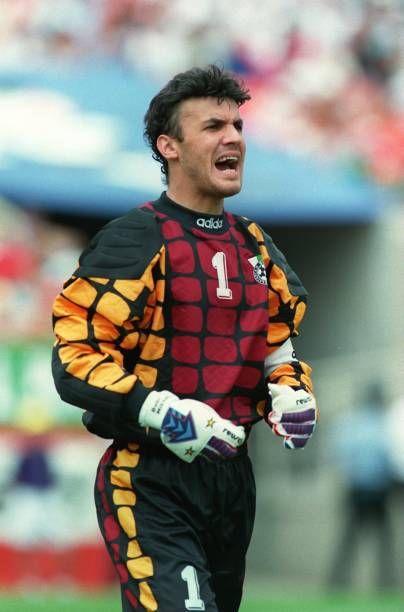 first tournament I properly remember was euro 96. got told off at school for singing the baddiel and skinner song constantly.

I remember seeing Hillsborough on the news (without really knowing what was going on) and my parents watching the Italia 90 Final.

1992-93 was when I started to pay attention to sport, so I’ve got flashes of Barcelona 92, various Scotland rugby games, Aberdeen/Scotland football matches, TdF stages and a few F1 races. Distinct memories of Ally McCoist breaking his leg when Scotland got pumped by Portugal (I remember the live feed looking and sounding like it was being beamed in from the moon) and San Marino’s goal against England.

Probably 86 world Cup, with the Argentina game the strongest, though its around that time my dad started taking me and my brother to Maine Road and I definitely remember some midweek cup games which may have been either before that summer or after.

Tennis would be Becker at Wimbledon, probably vs Lendl.

Cricket I reckon is Botham at Headingley in the ashes.

earliest live sporting memory is going to Home Park to see Plymouth Argyle draw 0-0 with Hull. Incredibly, I went back.

I remember Hill winning the F1 championship in 1996, and I remember being at my Aunt’s house during the 96 olympics, I’m pretty sure I caught some live basketball while eating breakfast.

But the first thing I remember was the 1996 FA Cup final, cos I definitely watched the entire match with my mate.

ooh no my first memory of any sport is of this, because the numbers on the score were a lot bigger than in football

so I must have watched at least bits of football, but no idea what specifically