These are getting later and later.

The cat’s got to go to the vets for tests tomorrow and has to fast from midnight, so I must remember to empty his food bowl before I go to bed. Really not looking forward to him screaming the house down when I don’t give him any food tomorrow morning.

Was going to make halloumi burgers but forgot to get rocket like a twat so have gone in a bit of an emotional huff and have ordered a pizza.

At a point where I could walk away from my job. Absolute fucking joke.

Two birds with one stone - put a load of Fairy in your hair and use that to do the dishes, then rinse it through.

Trying to teach the dog paw but he’s too excited by the sausages.

One of the old boys in the pub swears by using washing up liquid instead of shampoo. He says that an old barber of his recommended it (although as the barber apparently also claimed that wearing hats causes baldness, his advice should probably be taken with a pinch of salt).

Feeling pretty shite about my own workplace right now.

Hey. Deep regret at eating so much pasta before bouncing around to 90s hits for an hour. I’m all sweat now. That’s all that’s left of me.

Going to have a bath and read later

Look at this hunk

That looks absolutely incredible and I would eat it all please

Me too. Says serves 6 (more like 10 iirc) but I’m willing to challenge that suggestion.

I should get it in the freezer to remove temptation

Went to watch the batman, made an aubergine and peanut stew, gonna watch betis - vallecano and read a bit

How was the film?

@inthedusk what’s in the pasta?

Most washing up liquid has warnings like “causes serious eye irritation” on the bottle, so I would say using it to wash your hair is a bad idea even apart from the fact that it’s not designed for hair

Having some buttered Digestives

It’s this but with almond milk, ordinary broccoli (inc all stalks) and some cavalo nero as well as spinach. 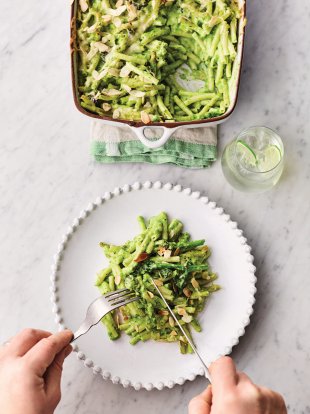 This Jamie Oliver mac 'n' cheese recipe is SO good, and it's packed with gorgeous green veggies. Topped with flaked almonds for crunch and oozy Cheddar.

I thought it was good. Not the highest bar but best superhero film I’ve seen in years. If you like batman enough to wanna watch another batman film in 2022 then i reckon you’ll enjoy it