Ever Smashed A Window?

I broke a teacher’s windscreen at school when I was about 9 or 10. Didn’t intend to, just carelessly through a stone up in the air in the playground. Teachers used to park on the edge of it. It was his fault really, right?

While walking the family dog, in my late teens, I kicked a stone which shot across the road at a pace much harder than I’d intended. It hit the opposite kerb and ricocheted up and hit the lounge window of a house. I tried to look nonchalant as my dog did a wee and it must have worked as the family came out and looked up and down the street but didn’t challenge me. The window didn’t shatter but it must have been damaged. I didn’t go close to inspect my work.

I did exactly this. What were they expecting putting up a greenhouse next to a house with kids ffs.

I’ve smashed windows both by mistake and on purpose, it’s a glasgow thing.

Smashed a window (playing football, caught a decent volley straight into my mates parent’s greenhouse) AND fell in a pond in the same afternoon when I was around 8-9.

Also smashed a next door neighbours window twice playing football on the garden around the same time period.

once pushed a go-kart into my dad’s greenhouse to see what would happen, then tried to blame my little brother for it.

yeah. with my fist. arguement with an ex. Seemed like a good way to take out my anger. Not so much when I was then sat in A&E afterwards though.

smashed a glass front door when i was little. just ran as hard as i could and headbutted it. the strange part was i remember being surprised when it broke.

When I was a kid, maybe about ten, I was walking home from school with my mum and my little brother. Obviously we had a difference of opinion, which led to me chasing him back to our house. He ran into the house, slamming our two-glass paneled front door behind him. I ran into the door with my arms outstretched and took out the top panel. I had a tiny scratch, but my mum made great play of the fact I could have amputated both my hands.

I also hoofed a football through a pane of glass in our back door at the same house. Again my mum was an innocent bystander. There was a piece of the glass embedded in a wooden kitchen stool that she had just walked past on her way to make a cup of tea.

In adult life, I’ve put up a second hand greenhouse, so yeah obviously I smashed some glass there.

About 7, at a friend’s house down the street, was chasing his cat and managed to stick my foot through the greenhouse (i think the cat outsmarted me), his dad was just coming out the door and shouted WHAT THE DICKENS??!?!?! and I didn’t stop running until I got home. The end.

Was kicking a ball about on my mate’s drive when we were about 10. Hit the smaller window above the main window and the entire pane, including the pvc surround, just dropped out. Wasn’t like I smashed the ball at it either - we were just lobbing it up in the air, seemed to do a disproportionate amount of damage really.

Not me, but one of our group smashed the window of our airbnb in Lille when we were there for the Euros. He was pissed and got fed up waiting for one of us to get back with the key so he smashed the window to get in. Will never get over waking up the next day to hearing him desperately calling all the glass repairmen in the area and proclaiming frantically down the phone in a thick Dublin accent “Eh excuse me, parlais vous Anglais? Eh yeah, can you fix a window in Lille, like today?”

imagining a tiny child with a beard.

Never smashed a window before nope. I didn’t do anything at all after being made to watch this terrifying farm safety video - 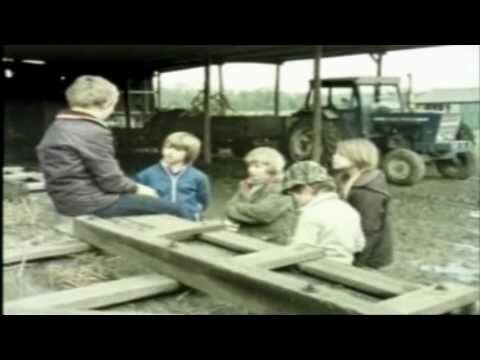 So many friends lived on farms “NO! Let’s maybe not climb into the abandoned farm building through that broken glass window. Oh and maybe we shouldn’t climb amongst the blocks of hay… aaaand let’s move away from that bog…”

imagining a tiny child with a beard.

We were also made to watch this at school whenever it rained. Also it’s sequel the equally gruesome “Building Sites Bite”.