Not really interested in your own exam results, this is more just to chat about how monumentally shit it is for kids today getting their A-level results and the massive fuck up this has been, and more broadly to talk about what we could do instead of using exams to judge and restrict the future prospects of children.

On a personal note, exam results day always makes me happy because it reminds me that I’m no longer a local newspaper reporter, when this day was one of the worst of the year (although today is probably a good day for reporters looking for local interest stories, there’ll be so many kids with fucked up results).

What made it so bad (edit, to report on I mean) I always assumed the stories would more or less write themselves (on a “typical” year anyway)

Slow hand clap to the exam board for dropping one of my students from an A to a C, but accepting the A grade we allocated them for Further Maths. 🤷‍♀️

I know this situation is unprecedented and there’s no perfect system but surely they could have done better than this.

Had to get up really early, had to drive around like a madman trying to get to different schools, schools always put the same kids in front of you (the ones who got straight As and were going to Oxbridge), but the main thing was that most 17 / 18 year olds are fairly inarticulate (actually most people are when confronted with a journalist, but normally you’re asking them to tell you something that happened, which is fine, but kids getting results the only real thing you get from them is how they feel about it, so you get the same “Yeah I’m chuffed, I’m really pleased” a hundred times).

Then the photographer will make them jump up and down holding their results (because it’s slightly more interesting to look at that a line of kids just stood there holding pieces of paper).

Still, better than GCSE results day because those kids have even less chat.

Yeah I don’t understand how any of it works

my sister got her a-level results today! Her mock results were AAA, her centre assessed results were A*,A,A* which she 100% deserves yet because of clever Boris’ algorithm she’s ended up with BBC ... HOW do you come to that result when NONE of her work has ever been graded that https://t.co/yedAUl3LVc 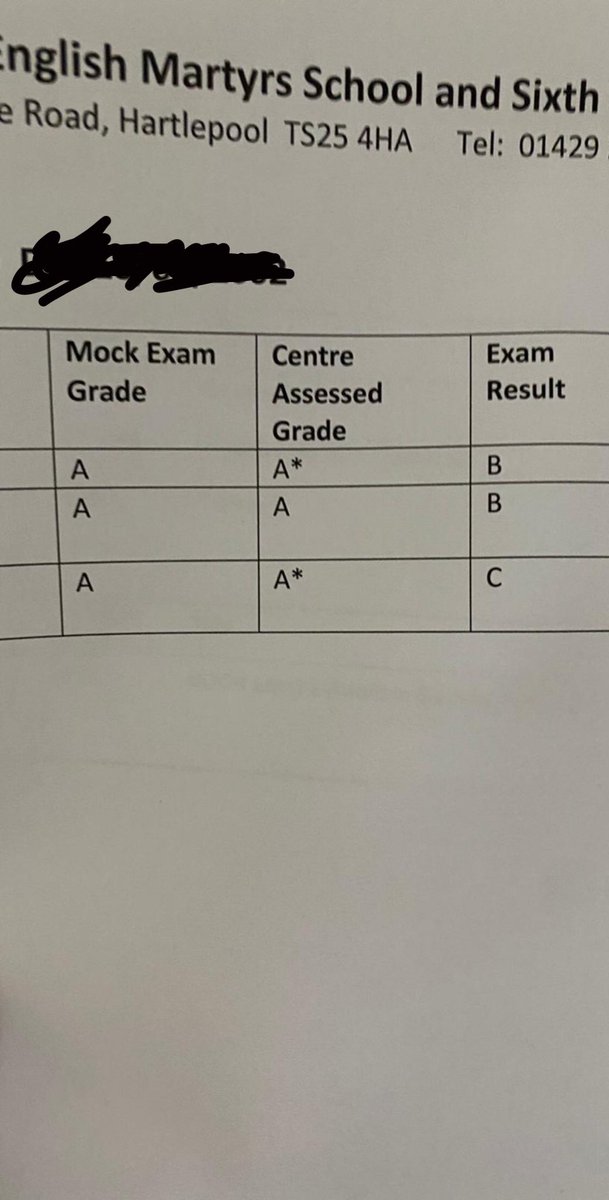 My mam teaches sixth form kids, her school isn’t in a very well-off area and typically only sends a small percentage of students to University each year, for whom it’s a really big deal. This year her classes have been really high achieving compared to the typical intake, and I’m really worried her students will be screwed over massively by this, will give her a ring later but she’ll be there til this evening (as she always is).

The ‘good’ thing about this is that this generation is being so utterly screwed over its hard to imagine many of them maturing into adulthood without at least a latent resentment of the tories…isn’t it?

(It’s very much not good I do realise that)

Just give them all their teacher assessed grades ffs

Saw something like 96% teacher assessment accuracy compared to exam results which surely accounts for 4% slightly overperforming or underperforming due to nerves/exam stress.
This generation are going to have it hard enough the next few years just give them their fucking As and Bs they deserve imo

How come the results are being so uniformly downgraded and by such a drop?

i have no idea but at a guess teacher assessments would all be over what students would typically receive?

A teacher friend has explained it, apparently the algorithm took mocks and assessments and set it against historical grades the school had attained. Then they also had to account for proportionality as only a certain amount can get A*s

Clearing is going to be an absolute shitshow this year, in addition to students who haven’t got their expected grades trying to get places students that rely heavily on international students (mostly London-based and Russell Group institutions) are going to be trying to hoover up as many students as possible so there’s more opportunity than ever to trade up.

Ofqual have said pupils from lower socioeconomic backgrounds were more likely to have seen a bigger downward adjustment, but said there was “no evidence of systematic bias” in the adjustments.
6 Likes
jordan_229 13 August 2020 09:59 #19

Would be interested to see the splits based on schools/area.

Teacher assessments are usually bang on. Sometimes there’s pressure to move kids about from SLT to make the school look better, but on the whole I’d trust the judgement of someone that works with them day in and day out for a year or more over one exam on one day to give the best reflection of the child/young person.

This is just Tory education policy in a nutshell, making sure the good schools stay good and leaving the rest to fend for themselves. I used to audit academies and the funding “outstanding” schools receive compared to the others is so depressing.

According to Ofqual the teacher assessments were too generous.