Just over a month away so thought I’d get things rolling.

There haven’t been a huge amount of driver changes - Hulkenberg loses his seat and Ocon comes back in for Renault, and Kubica’s disappointing 2019 sees him replaced by young F2 driver Nicholas Latifi at Williams. Speaking of Williams, it’ll be good to see how Russell continues to progress, as teams start to look ahead for some pretty large moves midway into the 2020 season ahead for 2021*

China’s race in April is at risk due to coronavirus, so expect news soon if the calendar is going to change due to this.

super excited for this season, plenty of interesting bits going on before it all gets reset next season by a change of rules

You’d be brave to bet against them having a car that’s good enough to win, or that (given their well oiled workings as a team), they will win both titles again.

Hamilton remains the man to beat. not challenged by his team mate but he’s still had to drive very well to beat Ferrari as comprehensively as he has for the last three years. My opinion of him remains pretty much the same as it was a few years ago - he’s up there with the best of all time.

I still think Schumacher is the greatest, with Hamilton and Alonso in the top 5. Fangio the other I’d definitely include in the top 5 due to him winning the title with 4 (four!) different constructers.

Bottas is in a fairly boring place. He’s a no. 2 driver who will continue to be just that. He’s not fast enough to challenge Hamilton and he’s not interesting enough to be in any fun battles with other people, he’s just kind of… there. The F1 equivalent of playing for Everton

Having signed a 5 year contract, Charles is now effectively their number 1 driver. Absolutely fascinated to see how the driver rivalry works out this year, and to see if Vettel is still about next year.

I think Verstappen is faster than Leclerc and therefore 2nd best on the grid currently but over a season it would be very close as the latter seems more likely to be consistent over time.

Albon has to get way closer this season. Last season he did well given the circumstances but this time he’s got full pre season so no excuses - gotta be racing the rest of the top 3 teams not hanging on in front of the midfield.

How good are their drivers? Sainz did reasonably against Verstappen in their time together at Torro Rosso but he was considerably older and more experience in junior categories. He was comprehensively taken apart by Hulkenberg who now hasn’t got a seat. What if the car last was actually capable of a lot more?

Ocon vs Ricciardo could get pretty spicy, the former is no slouch and the latter has got his eye on Vettel’s seat

Grojean more consistent, Magnussen more of a hard racer. Both have gone up against world champion team mates and been roundly out performed. Wish one had left so we could see someone else tested against a known quantity!

Newly branded Torro Rosso/RB junior team. Really nice looking car they’ve got. Fascinating driver line up too given that both have been given chances in the main team and then dropped. Whoever does worse of the two will surely be out a the the end of the season… tho having said that, there are no obvious replacements in the RB junior programme. The only driver in that programme who’s actually won a series is Dennis Hauger who demolished the field in Italian F4 last season and is in Formula 3 this year. So highly unlikely he’ll be in F1 before 2022.

Going to be renamed as Aston Martin. Perez is another driver who’s gone up against a world champion and been taken apart. He’s not bad though - could argue he’s the best driver on the grid who’s not won a race.

Latifi is a big fan of Deadmaus, this was mentioned today during testing. Ted is also a fan - Crofty was asking him about gig in NYC They claimed that Deadmaus was gonna make some music for Latifi’s website.

Latifi has taken part in 67 F2 races, and managed 6 wins and 0 poles, with 4 of the wins coming in his 3rd season. Before his single win in the 2017 F2 season Latifi hadn’t won a race in any category for 5 years

How good Russell is, we’ll hopefully see this year if the car is good enough to regularly be seriously in the midfield

See everyones being a bit pissy about Mercedes shenanigans

The new Netflix season is really really good. The Spa weekend episode is astonishing with some of the footage they were able to capture, and how they tied it into the Albon/Gasly story as well.

I’m about halfway through it and really enjoying it. My girlfriend has no interest in formula 1, but enjoyed a couple of the episodes she saw of the first season of this, and is watching all of them with me this time and liking it lots too. She’s now even suggested maybe watching a proper race, although it may end up being less exciting if there are just endless laps with just a couple of overtakes…

How the fuck do K-Mag and Grosjean still have drives, and in the same team?

on their day they’re both fairly good

who would replace them?

Hulkenberg probably but who else?

What’s the series called? Not a huge fan of F1 but I do enjoy a good sports docco.

The Ferrari driver academy seems to be the best bet, which is not the deepest pool of talent. Maybe Shwartzman next year? A Russian driving for Haas?. No one obvious coming up from the US, even with the attempted rehabilitation of Santino Ferruci. Still think one of the current drivers could be sacked mid-season.

next year when everything gets shaken up, fuck knows

The Spa episode was as great as you said it was. Really gripping (and sad) throughout.
We then followed it up with the one I was really looking forward to, about Ferrari, especially after the build up and dramas between the two drivers. But it was just so disjointed and jumped around everywhere, and focused on things that didn’t seem that important, and didn’t even show or mention their collision with each other, or the team orders to Leclerc at the beginning. It felt like such a waste, and was my least favourite of the six or so episodes so far.

Yeah the Ferrari one they didn’t seem to nail. I think it was pretty clear that everyone concerned was not giving anything away to Netflix there.

half the grid have been involved for long than Verstappen and Sainz, half for less time

seeing it like this makes you realise quite how long Kimi has been involved, and just how long Lewis has been at Mercedes!

Headline still refers to the McLaren team member, but looks like the whole Grand Prix is being pulled… 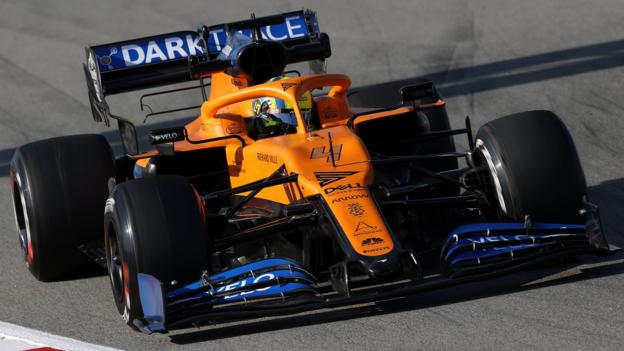 McLaren withdraw from this weekend's Australian Grand Prix after a team member tests positive for coronavirus.

watched a bit of that earlier, crazy how few people finished. was well annoyed at the time when Hill blew up.

good to see them run some old races on YouTube, often watch some of the classic races on the Sky F1 channel but they seem to have stopped showing them in favour of full race weekends from 2019. can’t imagine most people are wanting to watch practice sessions from last year tbh.

Cars looked so much more beautiful then than they do now. Aerodynamically simpler.