Nah, I didn’t know that. Similarly, I wasn’t really paying that much attention during those years. Sounds like it was functional, but there was a craving from certain quarters for something more showy. I’d rather the race was kept pure by an unflashy quali than have a weekend of add-on froth (especially for points) diluting the main event.

All they’ve really done is extend the race by a third. Instead of 305km it’s 405km, but there’s a red flag after 100km with a standing restart.

And the top 3 get bonus points for doing well over the start bit.

And if you fuck up in quali, come proper race day (big points scoring day) you’ll likely have made it further forward on the grid.

Imagine if you tuned in last time on the Sunday having heard that Verstappen had qualified only 3rd but probably had the faster car, and then found out that he’d already made up the places the day before so was at the front.

It’s gonna be interesting to see how it pans out but feels a bit like they’re just messing around when they don’t need to - if the aero changes for 2022 work well, the racing will be better, and hopefully a reset of the rules won’t lead to Merc dominance. Bet it does tho

Quite interested to see it in action even though I think current quali is fine and it would be a shame to miss out on legendary pole position laps. I’ll be happy with quali on a Friday (record and watch when I get home), short race on Saturday and big race on Sunday, extends the entertainment.

It feels like it might reduce the likelihood of mixed up grids - but I’m not even sure of that to be honest. Perhaps the possibility of accidents means the opposite is true. I dunno. Entirely willing to give it the benefit of the doubt for now.

It’s gonna be interesting to see how it pans out but feels a bit like they’re just messing around when they don’t need to - if the aero changes for 2022 work well, the racing will be better, and hopefully a reset of the rules won’t lead to Merc dominance. Bet it does tho

Mercedes got the last two big rule changes right in 2014 and 2017 so no reason they won’t again - and somehow I doubt that even if they got it a bit wrong they’d not end up floundering at the back like Ferrari did last year, will probably just win every other race instead of every race.

always a chance that someone will pull a Brawn and just come out of nowhere, but we’ll see.

I want Alonso to get another title and to be fighting at the front next year. Who he fights with I don’t particularly mind - the next generation have plenty of time in their favour.

I would be quite surprised if Renault/Alpine managed to pull it out of the bag, I reckon it’s more likely Mclaren will take another step forward given how impressive their improvement has been over the last few years.

Ultimate banter option: Haas pretty much giving up on 2021 to focus on 2022 leads to them having a 1 second per lap advantage, Schumi junior wins a title and Marzipan cries

as you say, Mclaren are probably most likely to get up there, making good progress and just feel like they’re set up to actually progress, Seidl seems to know what he’s doing, Zac Brown is bringing in money, Norris is doing really well so far and you’d imagine Ricciardo will get better with time after an underwhelming start

Haas suddenly being the best car would be hilarious, but given they’ll probably be Rich Energy Mazepin F1 by that point we’ll all end up rooting for Mercedes to beat them somehow

also Mazepin is already crying, claiming it’s unfair that Schumacher has links with Ferrari so has an unfair advantage. the guy literally only has a seat cos his dad bought it for him, and he’s still complaining it’s not enough. absolute fucking clown.

Some art someone made on a football pitch in Portimao

Race was solid for the first third, reverted to the usual from there on. Mazepin might genuinely be Yuji Ide/Jean-Denis Délétraz bad in terms of F1 performance.

Most entertaining thing about the race was Mazepin being a minute behind second-last and getting a 5 second penalty.

not enough of a punishment

given that blue flags will always be people further back, it would make sense for the punishment to be something that actually hurts… but the problem is that a grid place penalty wouldn’t matter cos he’s always gonna be last haha

Do they not still get points on their license or something?

Would be funny if he eventually gets a race ban

Just read that he did get a point on his licence which is as good a punishment as they can do right now, short of making him do lines, or a press conference in his pants or something. 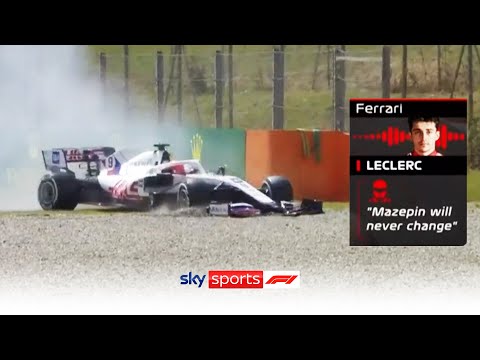 surely Merc have fucked it by not pitting Hamilton as soon as Max’s stop was slow?

That’s my initial thought, but we shall see. Seemed like they gave up a slam dunk shot at snatching the lead

I thought they said earlier that it was 1.8s a lap advantage needed to overtake. Which sounds to me like it is not possible to overtake any cars you will actually be racing

this graphic is from after the first race of the season, so HAM BOT VER (in any order) got to 15 after Portugal, will be 16 if this race finishes as is

how many times has the podium been HAM VET ALO in any order?