Not sure about the order, other than YLT being top…

Andrew WK, US Girls, Cupcakke, The Breeders and Screaming Females.

which has taken a while for me to get used to because I loved the guitar tone Quinlan used on the previous record. It’s pretty much the same style of songs, just with the hard edges taken off

But, yes, i agree

what? how is that name-dropping I was replying to you

8 posts were merged into an existing topic: Saturday morning thread

Nap Eyes is going to be seriously underrated this year, and surprised by the lack of love for CSH. Also based on singles I’m dead excited for Hop Along and Malkmus.

Of what has been released this year and i’ve listened to here’s the current order:

Have also enjoyed Jonny Greenwood’s filmscores to Phantom Thread and You Were Never Really Here too.

No real order I guess for now:

Very encouraging since most of these artists are brand new (or basically new given how little of their discography I’ve heard) to me. I’d never even heard Jeff Rosenstock, Hot Snakes, No Age, Hookworms, or Horseflies before.

With honorable mentions to Car Seat Headrest (still not fully there, I love some of it but the spoken word bits and fourth-wall breaking are kind of too much for me) and Kraus (punchy shoegaze).

Not so many for me, but still got lots to check out.

Also shout outs to these EPs

Surprised you didn’t know hot snakes or no age. Rosenstock used to be in Bomb the Music Industry innit

Howdy ho - I literally never write in here, but some obvious and not-so-obvious ones, in a rough chronological order, and based purely on what is out now:

…ooooh boy, and that’s already nine. The #10 slot could go to Breeders (obvs), Linqua Franqa (Athens-based rapper who was ~spotted~ by NYT at SXSW - we’re so damn proud), Lucy Dacus (obvs), US Girls (so obvs), Eric Chenaux (I wrote bout this), No Babies (noiiiiiiiise from Oakland), Daphne & Celeste (no, seriously), OR Baloji (suss this out if yr into mad afrobeat mash-ups).

This does not even include what’s on the horizon. May looks to be STACKED.

PS, Sean - I loved the Blow too, but that was deffo last year.

Sean - I loved the Blow too, but that was deffo last year.

The Blow only just released it in the U.K. to coincide with tour that starts this weekend.

I’d heard of Hot Snakes and No Age but for some reason never listened to them (I might have given one album by each a very distracted listen once, but I don’t even remember). Now I’m excited to go further with them though. This is the first I’ve even heard of Bomb the Music Industry! I’m going to add that to my to listen list.

Ahhh, the Blow are AMAZING live! Khalea’s one of the most creative, wittiest, cleverest front people I’ve ever seen, period. And they were touring w/ EMA here, so you know that was a crazy gig!

Nothing is going to touch that Beach House album this year. Nothing

Ohhh, you’ve heard it? As a lapsed fan I must say that the two singles have definitely renewed my interest.

Car Seat Headrest/Young Fathers >>>> everything else so far

here’s a wee playlist of mine so far: 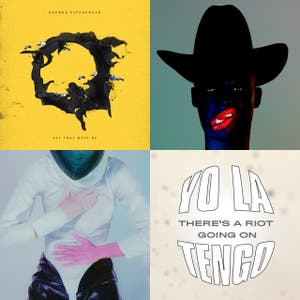