Feels like there's some snooker due on the idiotbox?

Poor old Rod. Not enjoyable to watch but I feel sorry for him. 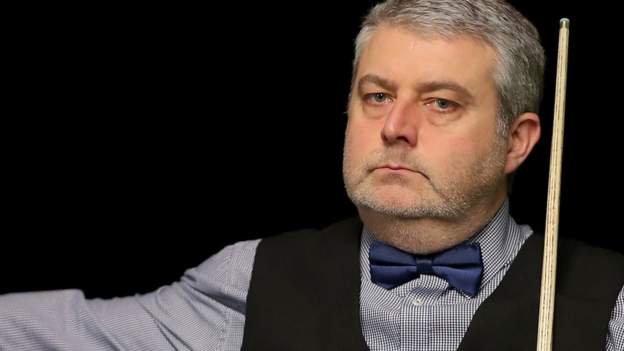 Yeah Hearn’s cracking down on players with average shot times of over 30 seconds. Seems a bit arbitrary. Anthony Hamilton’s slow as fuck himself so that game would’ve been turgid admittedly.

Also Murphy got dumped out of the UK preliminary stages by some young lad ranked 124 in the world yesterday so that was good.

does the mc introduce him as rod the plod? bit mean really

Selby out too, now. Crikey.

If it’s Dan Walker - he clears all his nicknames with the players beforehand, don’t worry!

Dunno if being a pro for 28 years with a highest break of 143 makes me pity him or admire him.

Heh. Turned pro the year Hendry won his first Worlds then. Obviously an old school potter who didn’t adapt to the modern game.

Although there is someone else who’s been a top player for years who I recently found out hadn’t made a competitive maximum and it surprised me, but I can’t remember who the hell it was. Cool story.

Actually maybe it was Mark Allen (who only made his first one at the UKs last year believe it or not).

Nope, it was the Gentleman Joe Perry. Still hasn’t made one.

Think we’ve spoke about this before but snooker is hard as fuck. Forget what my max break is, vaguely remember finishing off most of the coulours once so i’m guessing 22 or 25.

That was as a young lad, though. I think if i’d continued playing regularly over the since it’s not completely inconceivable that i could have fluked a half-century, but that would always largely be reliant on good luck without the planning several shots ahead like the pros do.

I tried practicing on my days off last year. It’s fucking insane how the body ages getween, say, 20 and your mid-thirties. My distance vision’s completely gone and my back was twinging on every shot.

I saw Stephen Lee play some exhibition games in a local club once. The gulf between him and even the very best club players, who’d think nothing of giving you a 50 or 75 start, was vast. Know he won some minor tournaments and is a bit of a twat but interesting to think how far he could have gone if he’d embraced the…modern elements of snooker so to speak.

But seriously yeah snooker’s remarkably difficult. I mean I reckon most people with a bit of solid coaching on technique etc. and with HOURS of regular practice could probably make 50 breaks etc. but just turning up and having a go… no chance. Unless you’re very talented. Think that’s why I’m so into it.

I’m a handy pool player but snooker’s a different league altogether. Every now and again my mates will be like “yeah let’s play snooker” and you go along and… it’s fucking rubbish because no-one can actually play. Stick to pool lads.

Yeah Stephen Lee should’ve done more in the game. Absolutely the gold standard for a natural cue action. Rolls Royce as they say. But yeah a bad egg all round so fuck him.

Aye, knew he was a happy clappy, seems his wife is also.

Yeah although there’s a difference between being ‘happy clappy’ and making the main focus of your life and career to actively campaign against abortion. I don’t like Murphy but I don’t think he’s really actively banged on about God/Christianity at all.

Same here, I reckon I made a few thirty breaks, and on one occasion I clearly remember I had a lucky run of the balls around the black and had a short straight red with automatic position on the black for a fifty. My opponent said “you’ve got a fifty on here” and so obviously I crapped the red immediately.

All about the technique though isn’t it. The key to making decent breaks is being able to get the cue ball almost exactly where you want it off every shot.

I tried to go to this on Wednesday as was up in York for work. Walked up at 7.15pm, bought a ticket from the box office, then the security stopped me as I had a backpack (laptop and notebook inside). Wouldn’t let me in! No cloakroom to put it in either. They didn’t want to give me a refund for the ticket, until I argued enough. Ridiculous experience.

Said hello to Jimmy White outside though.

Interesting piece about Ronnie thinking of trying to set up a rival franchise:

Ronnie O'Sullivan has proposed a breakaway "Champions League-style" snooker tour and says Stephen Hendry and John Higgins could join him.

Not sure it’d get enough support from the top players in practice. Do think there is probably a reasonable point at the back of all this about the number of tournaments they’re expected to play these days and the effect that has on the players.