After this weekend’s badness I think what we all needed was a chance to join together and cheer on the brave lions of the Men’s England International Football Squad.

This is the most frustratingly fucking shit international break of all time.

Seems like every single team in the league has fixtures to make up and no time to schedule them, why not have a weekend off for a fucking friendly and a game against Lithuania!

It’s bringing the country (and the boards) together, Ant.

That’s true actually. I’m very much looking forward to the country uniting behind Lingard, Rashford, Shaw, Smalling and Jonesy for a change

The latter was an unused substitute.

Also, not sure if it was mentioned in last week’s Football Thread, but since we are dismissing International Football, the difference in quality and entertainment between the 2nd phase Champions League matches and pretty much any knockout match (Brazil v Germany excepted) in any of the past half dozen major International tournaments is staggering.

Yep. 3 reasonably decent players who could end up good and the rest are shite

it should be banned

Nationalism’s all we have left!

On Saturday I think we may have become the first team to win a game without registering a shot on target in the whole game.

In my lifetime (just) but I wasn’t old enough to appreciate it. Euro 96 is my first football memory

you wont miss it when its gone

Meh, I gave up on International Football in 2007.

It definitely happened once before this season, funnily enough it went in Watford’s favour so they can’t complain about Saturday! 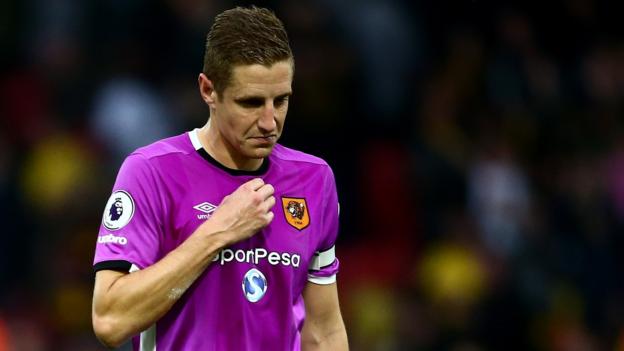 Hull City suffer their sixth straight Premier League defeat as they concede a late own goal against Watford at Vicarage Road.

The thing is it’s not like it’s weak through being unfinished potential either, Smalling, Jones, Bertrand, Walker, Lallana are all at an age where people seem to still think they’re young when they’re all like 27/28 or so and that’s not even mentioning Defoe and Vardy.

Aye, it shows:
a) we should be building our team around the idea of Kane on his own up top, because no one else is anywhere near his level
b) How ridiculously weak our squad depth is (3 starters injured and we end up with Jake fucking Livermore in the squad)