I’ve always been curious to play this one, as the series gets a lot of jokes thrown its way for launching in the same week as BOTW and Elden Ring; which many people, in my view rightly (certainly in the formers case) changed the open world ‘formula’). Equally I know reviewers and have friends who absolutely adore it, putting it up there with Sony’s finest efforts for story, exploration and action. So I wanted to see for myself.

Overall, I had a good time. I mainlined it and only did a couple of side missions and optional quests, but I really enjoyed the two Crucibles I beat and figuring out how to get up all the Tall Necks. It’s very fluid to play and easy to pick up. For a game with a lot more crafting and busy menu work than I’d normally enjoy, I didn’t find it overwhelming and I definitely spent more time fighting and exploring than doing admin.

Combat wise, I never quite mastered it but I had fun. I always struggle ‘reaction and accuracy wise’ with bullet time cover shooter games, but I loved the systems and thought you had to put into disarming the mechs. The bow felt great but I never got to grips with the other tools.

It looks gorgeous for a game half a decade old. Some of the snow fields really look stunning and the cut scenes show off pretty impressive character work.

Story wise I enjoyed it, it was solid. But as I’ve gotten older, I don’t want story games to interrupt the gameplay constantly with cut scenes, showing me a decentish story but an average one by modern TV standards. I like games that either don’t bother with much narrative, that leave it for you to delve into if you care (Metroid Prime, Dark Souls) or tell it through aspects of the gameplay (Outer Wilds, Portal, The Last Guardian). It’s probably why I’m generally less into the flagship Sony titles, and I don’t think the narrative here is as strong as The Last of Us or God of War.

Being good, but not quite as good, as another title, was probably how I’d sum up Horizon. I liked the aesthetic and vibe, but I feel like Enslaved was more original. I like the crafting and combat, but preferred it in Tomb Raider. The exploration and freedom was good, but BOTW changed everything for me. The writing and story was woven into the game well, but Witcher 3 did it better. I liked taking out hideouts and scaling heights to unlock the map, but Far Cry 3 had more tension.

As an almagamation of many of the last generations best games, Horizon is really commendable, super slick and very enjoyable. But it feels like it’s the end point of a formula that I’m personally happy to now move on from.

I’ve heard that name ‘Horizon Zero Dawn’ before and you know I always figured it was another game in the mould of Call of Duty, I guess because it makes me think of ‘Zero Dark Thirty’ as a name.

Also interested in the ‘open world formula’ thing. What did BotW do to that specifically? I’ve played a few different games with open worlds recently (Skyrim, BotW, Rime, Subnautica and I guess even Firewatch sort of counts in a minor way) and I don’t feel like BotW was doing a specific thing that marked it out - all these games had really great world wandering IMO, although Rime and Subnautica were both too hard in the end. But also I’m not much of a games player these days so it’s not really a position I can come from with any authority.

First two are games I started in 2022. Thanks to winter sales/CEX credit I’ve now got a big backlog of about fifteen games that I spent a grand total of 30 quid on with the aim of not spending any more on games for most of the year with the exception of Zelda/Spider-Man 2.

It’s mainly the genuine “go anywhere” nature of BOTW I adored, and the fact you did everything in cut scenes that you can do in game.

God of War has Kratos smash through caves, jump mountains, climb on dragons etc in cut scenes but when you’re in control, a small fence can scupper you. A wooden door can become a 10 minutes fetch quest. A small ridge can become an obstacle.

Horizon, Witcher 3, Assassin’s Creed (well, the old ones at least) all suffer from it. Whereas Link can climb anything, manipulate elements and is totally free to explore.

Also, the true sense of being off the leash is remarkable. Very little ‘go here’, map markers, interruptions to the game.

Just you and a world to explore. Bloody lovely stuff

Ah right, surely Skyrim and Elder Scrolls generally did all that too?

But yes, Zelda has a very very good quality of design and no real contradiction unlike the cut scene stuff you mention.

Never played those games, but I had no idea they did. The rock climbing and traversal were widely heralded in reviews. Will take a look!

Ah okay. Skyrim is from 2011 I think but it’s the same deal as Zelda with main quests and side quests all marked on your map and you can select what you’re going for.

The opening cut scene is actually just the game playing railroaded for you.

It’s better than Zelda in some ways as it has a whole political aspect and what you say to people you encounter matters.

But it lacks the environmental depth.

You don’t really rock climb in Skyrim, just walk up hillsides til it becomes too steep. Or you tilt your horse like this and fly through the sky 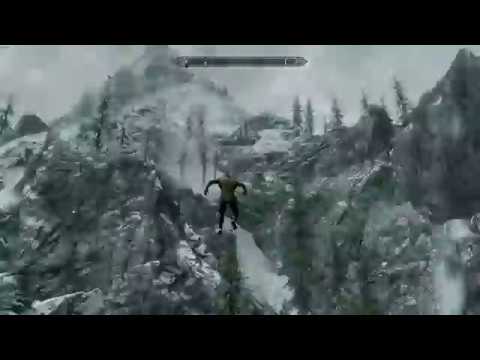 Did my first 30 min run. I can see the appeal, not sure how much more I’ll mess with it.

Very quirky shmup. Has NES visuals with arcade-strength bullet patterns. Odd combo but kind of charming. Has a story mode unlike most shmups which is the arcade mode broken up with lots of cut scenes and training sections. Doesn’t entirely work but a nice idea. Key mechanic as a bullet cancel beam that definitely adds a level of tactical thought that makes it stand out.

The Last Of Us Part One.

This is exactly what you think it is. The game is the same as it always was, but it looks, sounds and plays so much better. I would never have paid seventy quid for it (got it for about half that on eBay), but it’s the definitive version of an all time great game.

Start as i mean to continue, by doing a pair of narrative belters.

As recommended by @manches of this parish, I spoke of it in the last one but it didn’t get catalogued fully. I might technically have finished it 2022 mind you, but have back to relook it Chapters and fully fleshed out the story.

And what a story. I found some of the puzzles slightly too obtuse, with one specific one where you’re having to use a voice memo app to be very confusing and a little too difficult to finish. I managed to get the best ending I think by happenstance, and found the ending to be oddly vile in a way, with me being repulsed by a character, but overall it was something to be impressed by.

I have to say this - believe survivors. Not sure how this sits now, but before the new abiut the main creative force had came out I would’ve rated it highly. I found the humour to miss a lot of the time, but enjoyed the gunplay and traversal a lot after I got used to it, bar one very specific section when you needed to switch between three different abilities.

Also the game looked and sounded great. Felt let down by the need of a final gun at the end negating much of the strategy I’d built up over the course of the game.

I cannot recommend it now.

Glad you liked Norco. Have you played Kentucky Route Zero? Those two games are pretty much responsible for my obsession with the point-and-click adventure having a resurgence as the genre for telling bonkers Pynchonian magical realism stories

If no-one else continues this, I’ll just have to remember how to use Adventure Game Studio and make a game my-HECKIN-self DANG SARN IT

No, and now I will once I’m finished with Citizen Sleeper

Citizen Sleeper is very much on my list. You’d def like KRZ based on your liking Norco and (what I know of) CZ though. I played it as the episodes came out slowly over like ten years - so my obsession with it pretty much taints all the music I’ve made since 2014

Finished off Undermine on Switch. Pretty simple and fun roguelite, plays well and I felt satisfied by the end. Been a good evening wind down game in bed.

Next: Signalis, Norco or Paradise Killer

First game finished in 2023 and it was GOWR. This game was a lot of fun and had a lot of great things going for it. The combat felt as slick and visceral as ever and the addition of a new weapon was definitely welcome. The exploration was great and the game did have some really excellent side quests which were all the more enjoyable as they were fairly easy to miss if you didn’t explore each area.

What I didn’t like was just how much hand holding the game does with the puzzles. Without fail when you get to a puzzle if you haven’t completed the puzzle in 1 minute then one of the NPC would chime in with a “have you tried doing this?” suggestion. The game has absolutely no faith that you can work anything out and even more annoyingly these suggestion would jump in even before you have started investigating the puzzle. There were far too many occasion where I was just taking in the surroundings and checking if there were any hidden paths only to have an NPC tell me the solution to a puzzle I hadn’t even found yet.

The game does have some major pacing issues too. There are far too manty scenes that grind the whole game to a halt while you have to slowly walk your character around and listen to dialogue and wait for a button promt to get to the next bit which is a shame as the dialogue and plot in general is excellent (I particularly loved the variety of conversations the NPCs would have between themselves as they follow you around) I just don’t want it dumped on me for 15 mins when I am all pumped up with a new skill and just want to go out and try it on a few enemies.

Wandered around a weird train station, ate about thirty slices of pizza, stumbled across a group of nerds playing Netrunner. Very good. once I’m finished with Citizen Sleeper

I have fallen away from Citizen Sleeper, and it will not enter the Games Completed list anymore.