Happy New Year everyone! What’s everyone got going on this year?

FF7 Remake, Metroid Dread, and the rest of the Soulsbourne games to follow. It’s gonna be a good year, folks. I can feel it in my bones.

Very excited about this year. Got a good feeling that Nintendo will come back well with Splatoon 3, Bayonetta 3 and BOTW2. They simply have to. Curious about that Kirby game too.

Excited to play a Souls game on day one, with Elden Ring. Less bothered about GOW2 and HZD2 but know for many they’ll be highlights.

The year is supposed to end with Starfield too, but we’ll see.

Also got fun stuff along the way like Sifu, Stalker 2 and a ton of Annapurna titles.

This just happened overnight too…

@Wario64
an Xbox Achievement list for GoldenEye 007 has popped up bit.ly/32yEcGf https://t.co/OlTia6hZal 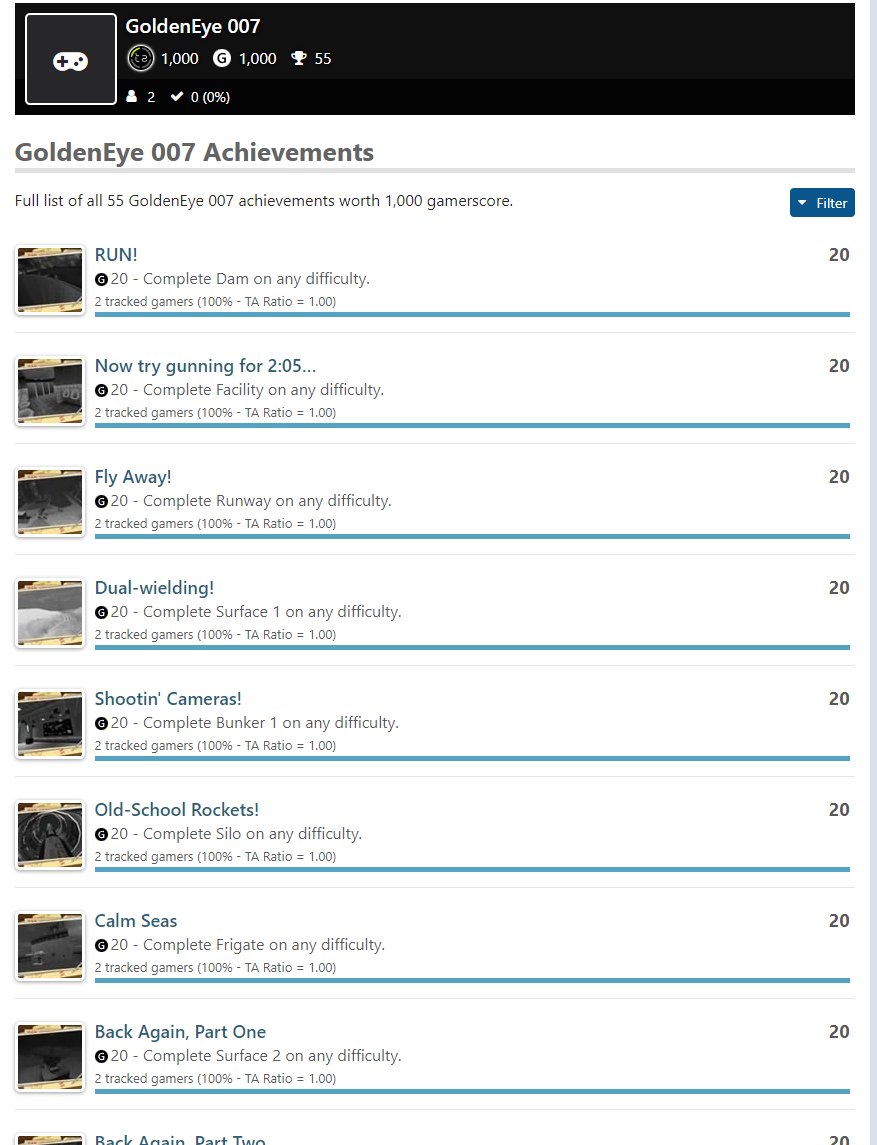 As for what I’ve got on the go currently, still playing GTAV with old school mates once a week, and the odd game of Ultimate Chicken Horse.

Would like to try out Aliens: Firestorm Elite again and try to beat It takes two.

Solo, I’m 1/3 of the way through God of War and want to put some more hours into Halo: Infinite and Forza 5.

Just completed The Gunk this morning! I bought my Series S to play Halo Infinite and I abandoned that about half way through the campaign and have had way more fun with The Gunk.

I like challenging and difficult games but I also have a place in my heart for fairly straightforward platform adventuring and this was a great big warm hug of a game. The alien planet looks beautiful, the characters are fun to spend time with and cleaning up the titular gunk is always satisfying.

Maybe it’s a time of year thing, I want to be cosy and unthreatened in my post Christmas fug, but I loved this game and I’m baffled by some of the middling scores it got.

I think I want to play a game that has an actual end early on this year - dunno what but everything I play at the moment (F1 2021, FIFA 22, Fall Guys, Football Manager 2022) just carries on indefinitely until you get kind of bored and it’s not the most satisfying. has to begin with F though as I seemingly only play games beginning with F now.

haven’t got stuck into a JRPG for a while, maybe something like that would be good. I know that Persona 5 Strikers is on PS Plus this month so could maybe give that a go too.

was watching my wife play the remastered Batman: Arkham Asylum recently, that could have been a good shout but now I’ve seen her play half of it I don’t want to play it all myself

Currently playing FFXIV, Animal Crossing, and Slay the Spire. Playing a bit of Overwatch too but that’s mostly for a pal who’s gone AWOL a bit.

One of the best games of all time

Got to Chapter 4 in Red Dead 2 again, enjoying it all over again, just gotta power through Chapter 6 and onwards this time and not daudle.

Got Guardians of the Galaxy, Tales of Arise and Ender Lilies over Christmas for myself to got a bit of a nice backlog now…at least til Elden Ring comes and takes that over.

Cannot wait to do the All Peak race. No way a snowboarding game could ever be better than this.

Definitely getting Silksong this year.

I’m Slaying the Spire as always (just doing the daily climbs now). Dip in and out of Dragon Quest Builders 2 (currently building a massive underground city, but I’ve made it too big for the population so it feels a bit sad and empty.

Also playing Trails of Cold Steel which I’d always written off from trailers but is actually a really good JRPG once you get to grips with the combat system (hated it at first but makes for really interesting and diverse battles). One of the best I’ve played for NPCs too - there’s a whole host of them with their own little storylines and occasional rewards or bits of information means it’s always worth speaking to everyone you come across. Could do without the misogyny (especially annoying because the female characters are on the whole very compelling) and the incest plot line though

Started the first Valkyria Chronicles last night. One of my favourite series but had never played the original. I’ve seen the main characters in sequels, but it’s an absolute joy to play - the storyline so far is more engaging than the sequels but naturally there’s a bit less to the mechanics of it.

Downloaded Wild Arms 3 which I might get stuck in with today. This along with FFXII was my favourite PS2 game, and I had no idea they’d released a scaled (not remastered) version you could play on PS4. No idea how it will hold up as it is very dated, but worth it for the nostalgia / music if nothing else.

Part way through Yakuza: Like a Dragon which I’m having a bit of a block with. I was really into at first, but the cut scenes started really dragging, and so far there’s not much to the combat. I do think it’s worth persevering with a bit more though, as presumably the gameplay to cut scene ratio will get better as the story opens up.

Bought Ys VIII as it is on a really good discount at the moment. Have only played one before but really liked it. Won’t start until I’ve finished Cold Steel though.

Will probably go back to NEO: The World Ends with You at some point to complete the extra chapter. Don’t think I can be bothered collecting all the badges though.

2021 was very lean in terms of gaming that really grabbed old Parsers. Psychonauts 2 was enjoyable and Mass Effect Legendary Edition was another the highlight, with Inscryption creeping in as potential game of the year, depending on how I feel about Act 3. You really all should get on that, particularly @Epimer.

Might get Deathloop at the next sale. The way it’s dropped in price like a stone doesn’t augur well. Other than that, Elden Ring’s the thing isn’t it.

I’m hoping Deathloop will be on Gamepass in a few months time.

Elden Ring and Monster Hunter Rise finally coming to PC will probably take up the majority of my year. That and continuing with Hades/Slay the Spire (until some other shiny new roguelikes pop up to try and claim the crown). Also gonna try and get into Halo to play with mates bug I’ve been really struggling to enjoy multiplayer stuff for some time. Not sure why.

Do it! Arkane games always seem to end up cheap - makes me think they never really have commercial successes, but I’ve never been obsessed by one of their games like this before. If you like Dishonoured but feel a bit exhausted by having to pick through the levels then you can’t go wrong with it. It’s also got something that those games really lacked: humour (though Prey had flashes here and there). I’ve been quite lucky in not really knowing much about it beforehand and it’s been an absolute joy.

Started Persona 5 and Hades recently. Enjoying both but loving the latter. Really looking forward to the new Gran Turismo and God of War games this year.

What are you into? And are you playing solo or with family / friends? It’s a pretty awesome library for anyone who is new to Nintendo or skipped a decade.

The two experiences that for me, aren’t matched anywhere, are Mario Odyssey and Breath of the Wild.

But there are tons of other great things too.