After completely dismantling my old giant pedalboard and selling off all the pedals, I’d gone entirely to plugins. However it wasn’t quite working for me not having something physical under my feet, so I started planning a hybrid physical/digital pedalboard and this is the result.

Spent a good few months working out what I wanted and how I could best make it work, and keeping an eye out for when things on my shortlist popped up on reverb/ebay or in sales etc.

Key working principles were to make it as small as I could whilst maximising flexibility, ideally with midi control, but also having an analogue drive section because 99% of the time I’m amp-less, and IMO it helps bring a bit of natural colour and fullness to modeling/digital setups.

What we have here is (in signal chain order):
Jackson Audio Bloom V2 - six modes of compressor (all optical, but with different attacks and releases), an EQ and a boost all in one, with a pretty unique feature, which is to be able to set a level for the boost and ramp (“bloom”) up to it at a set speed/rate by holding down the right footswitch. Hold it down again and it ramps back down. Press it normally and it’ll just switch up to the set level immediately. Also has midi control for preset recall.

Redbeard Effects Angry Rhubarb - two overdrives with a parametric EQ in the middle to be able to boost or cut specific frequencies heading into/out of the drive section. The one before the eq is lower gain and the one after is higher gain. Can properly shape the tone with this in interesting ways. Equally, you can cut the drive right down but use the volume as an EQ’d boost.

Audio Kitchen Fake Plastic Trees - basically Audio Kitchen’s own solid-state pedal take on their valve-driven Big Trees Amp-pedal. Even second-hand this was spendy, but it’s absolutely fantastic. About as close to an amp in terms of responsiveness and feel as I’ve ever experienced in a pedal.

Electronic Audio Experiments model feT - a preamp pedal recreation of the entire signal flow of a Sunn Model T amp. This thing is absolutely incredible. There are loads of Sunn influenced pedals around, but almost all of them seem to focus on trying to do the whole massive-distortion thing over the fact that Sunn amps were/are equally at home with a beautiful robust clean-tone. As far as I know this is the only pedal that recreates the preamp section of the amp too. It’s already become an always-on pedal for me - just makes everything played through it sound “bigger” even without pushing the dirty channel up, takes the other drive pedals wonderfully, and when everything’s cranked it sounds just as filthy as you’d expect.

Line 6 HX Stomp - no introduction needed for this, thanks to ttf’s evangelism, but suffice to say it’s a cut down pedal version of the Helix. Only 1 DSP chip compared to the Helix (which I think has 2?) so fewer effects simultaneously, but still able to get modulation, delay, reverb, models etc all on at once. The effects are really great - better than I expected if I’m honest - especially some of the more interesting reverbs etc. The amp and cab models mostly sound very good, particularly when combined with the model feT. I think @ttf has left, but if he’s reading this, you were right - this is great. #justiceforttf

The Airstep is a controller that has inputs/outputs for MIDI connections, TRS foot switches, and TRS expression pedals. It also sends midi messages via bluetooth.

Now, I know this post is TL;DR already, but here’s where things get interesting for me. The pedalboard is a dual layer Nux Bumblebee. Underneath the back layer and alongside the power supply is an Arturia Minifuse 2:

The minifuse is a 2-in 2-out bus-powered USB audio interface, which sits in the stereo effects loop of the HX Stomp. This means I can connect - for example - an iPad into the effects loop and run through some of the weird and wonderful effects available on the iPad. Say, for example, a whole suite of Eventide H9 effects like Blackhole, or Ultratap. Or any of the Fabfilter stuff. Or some of the incredible things you can only get on iOS, like Drambo, which is basically a combination of an Elektron Octatrack with a modular synth/fx.

What I’ve been doing is running Loopy Pro on the iPad - which is easily the best and most flexible looper I’ve encountered, with basically an infinite number of channels - as a ‘host’ and running effects like the Eventide suite or bonkers stuff like Rymdigare on the various loops/channels. And because the Airstep does both midi and bluetooth, I have it sending bluetooth midi messages to Loopy Pro to start and stop recording/turn effects on and off etc. and physical midi messages to the HX stomp at the same time.

And because you can move the effects loop ‘block’ to any position in the internal effects chain of the HX stomp, I can have the iPad at the beginning of the chain, the middle or the end. I can have everything running into it or I can stick it between say, reverb and delay in the HX Stomp. Or I could record loops into it in one position, change the preset and have the loops play back through a completely different set of the HX Stomp’s effects. Whatever I want for the particular sound/track I’m going for. And you can save all of that stuff as presets/snapshots on both the HX Stomp and Loopy Pro.

Finally, the Minifuse also has an additional USB input which can act as a host for bus-powered keyboards, so I’ve been able to load iOS synths like the Moog Model 15 up on another channel in Loopy Pro, and play them with my Minilab keyboard through the HX Stomp.

Works perfectly well with my MacBook as well, so I can also run a channel in my DAW as an effects chain in the place of the iPad.

Still a few small things to do like tidy up the cabling and get a MIDI-TRS cable for the Bloom, but otherwise really pleased with how it’s turned out.

Despite all that flexibility, it’s also only about 1/4 of the weight and 1/3 of the size of my old monster pedalboard. Mad stuff.

Any guitar people only have and play the one guitar? I have two but one just sits in a bag, lonely and unplayed.

Kind of for basses. My Lakland jazz bass is so lovely that there’s no point playing the others. My P bass gets played because I leave it at the other end of the house but if I wasn’t so lazy it wouldn’t get a look on. My five string lives in a case under my bed because I hate it but the resale value isn’t worth the hassle.

I have a modded Squier Jazzmaster which I love playing, which means the Gretsch Electromatic doesn’t get a look, so I just think why have it. Might have an opportunity to trade it in for a lovely looking Squier Mustang but the fear is will the Jazzy still rule the roost. I don’t know how some folk have loads of guitars, it’d hurt my head too much.

My modded Squier Jazzmaster is also my favourite guitar so I understand completely! My Tele is a “”“better”“” instrument but it’s boring. My fano semi-hollow gets played for the same reason as the P bass but it’s just not as fun as the Jazzmaster.

I tell myself they’re useful to have for recording

For six string guitars I only play my eighties MIJ Squier Strat because the neck is absolutely perfect for me in every way. I own another Squier Strat and a Squier Tele and I haven’t played them in years. Going to get rid of them in the next few months.

With basses I only play my Fender Mustang Bass as the shorter neck suits me. I do have a very nice Squier P-Bass Special with flats on it but I’ve no use for it as I’m not gigging at the moment. I might get rid of that too.

handy to have another guitar sat around for random tunings

I have 3 electrics, my jazzmaster is in standard, my jag is usually tuned up half a step for a band im in and I have a 12 string which I mainly play unplugged for now but there’s a recording project I’ve got coming up where im gonna use it.

When I tour I bring the jazz and Jaguar with me and I usually chop and change depending on how I’m feeling with the one I don’t play being a backup. Tbh I think even if I got successful and had the capacity to bring multiple guitars with me on a tour I wouldn’t want to bring more than 3 out of fear of them getting stolen or damaged. Also a ballache having more stuff with you!

My band mate says the same about recording, “keep those guitars/pedals, they’ll come in handy”…we haven’t recorded anything in 5 years haha.

anyone tried one of these? 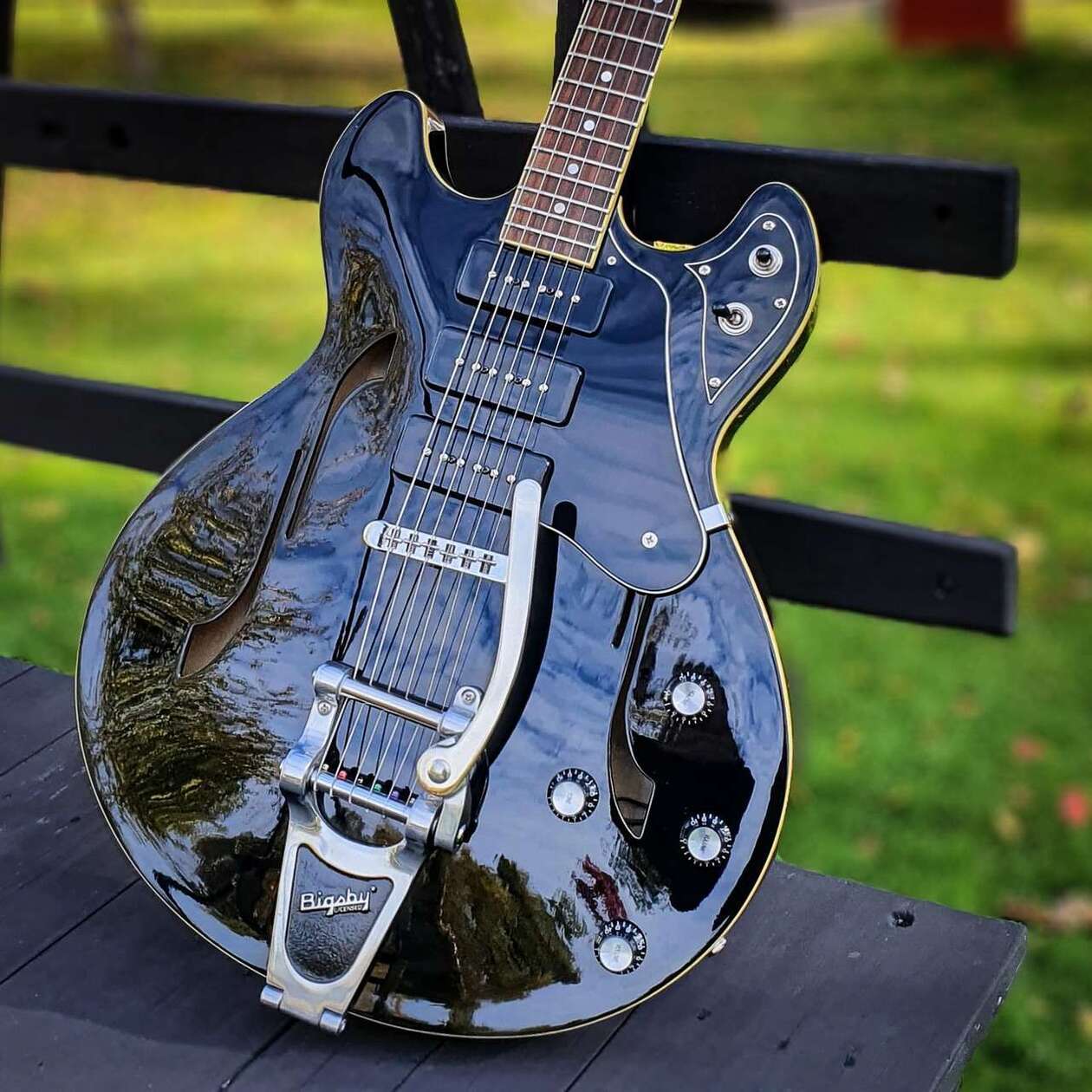 I refuse to comment on the last time I recorded something

Got a big birthday next week and the family have clubbed together to buy me a new guitar.

Was going to get a Gretsch, but got an amazing deal on something quite different instead…

Baum Wingman in vintage white. Very much in the jazzmaster vibe/sound - lots of clarity but surprisingly low on noise. Remarkably the Bigsby seems to be staying in tune too - possibly due to the roller bridge.

I know the headstock will be a big put-off for some people but I really like it, and it works better IRL than it does in photos for some weird reason.

Loved the look and sound of these things ever since I first laid eyes/ears on them, but had written them off as outside my price range to ever consider. However I managed to get this lad and a hard case for roughly 1/3 off the retail price directly from Baum because there’s a barely visible defect on the finish at the bridge. Brought it down to what I was willing to go to for a Gretsch. Considering my track record of adding dings, scratches and dents to my instruments, I’m extremely happy with that trade-off!

Happy 21st birthday for next week!

love the transparent scratchplate and matching bit on the headstock

That thing is ridiculously cool. Outrageous. Never seen one before!

Traded my Gretsch for a heavily modded Squier Mustang Bullet yesterday. Everything except the wood is new on it. Wilkinson tuners, Tele tail, bridge, pots and switches, pickguard and some hot Lukér pickups handwound in Wales. Very fun to play.

Hard to describe these without using ‘fun’! They just beg rock and roll abuse. The one that lives with my guitars is a terrible, terrible distraction!

@McGarnagle that guitar is insanely cool, style icon for sure. Love the gold foil style pups

For comparison purposes, their reverb module (Aurora) released a few months back is listed at $359 and I bought one for £339.

Looks like I’ll only be buying stuff from UK companies… Or not at all in reality seeing as non-essentials are off the table for a while.

Edit this is clearly maximum #firstworldproblems but it does show the direct impact these fucks are having on imports.