Well, for 300 you could get something fairly tasty if you go obscure, or Laney. Used obviously.

Equally I have a 50w Marshal Origin vallcve head with switchable 5/15/50 output. There are combo versions. Used might be in budget.

oh, switchable output sounds like it could be the way forward…

Probably need to go straight to a tech, but what an amp once it’s sorted!

Find many great new & used options and get the best deals for Traynor YGM-3 Guitar Reverb Mate 1970s Valve Amp at the best online prices at eBay! Free delivery for many products.

Headphones, Cab Sim, under £300? I’d heartily recommend the Orange Crush 35. I’ve got the 60 version and it’s aces for practice, home use and gigging. Also used the 35 itself, miked up for a gig and sounded brilliant. Always get tone commenters at gigs saying “nice tone” . The master volume means you can crank the clean/gain channels yet keep it neighbour friendly. £199 at PMT

Or with a footswitch from GAK (which is local to me…) 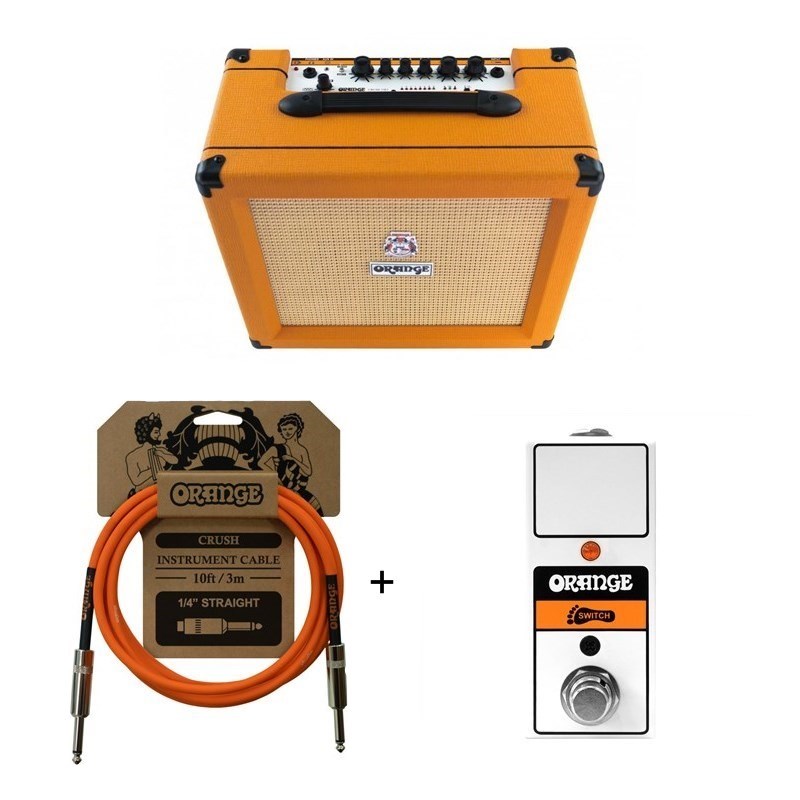 If you’re buying one with a view to headphones, deffo get something with reverb. Nothing as uninspiring as electric guitar straight to the ears with no sense of room/space imo.

The 35 doesn’t have the master volume looking closely at it…. But still a contender here!

Wrong thread sorry this is in reference to Brazil’s number 9.

Ah, must just be the 60 and 120 that has the master volumes then. With the footswitch from Gak is a good deal. I love a Gak visit when in Brightonia.

Dr Mrs Epimer just bought me a second hand Vintage SG with vibrola for £150 for Christmas.

Had this for a couple of days now. Was honestly pretty disappointed in initial noodlings, it sounded absolutely gash - wooly or brittle, nothing in between. Turns out that was mostly due to having the worst strings ever to grace a guitar on it, and putting fresh Slinkies on immediately made a huge difference.

The other thing that needed doing (still needs doing, really) is to adjust for the fact that my whole signal chain is set up to suit a Tele and JM - colourful compressor into tone-shaping pre-amp into spring reverb into AC30-voiced amp. Changed the amp to be on “British clean” settings and switched a load of other stuff off and it’s already sounding good. At some point this weekend I’ll redo the signal chain from scratch and see where that gets me.

Been a bit of adjustment to playing it too, the neck is very different to my Fender-types. Much flatter fingerboard radius I think? Keep fluffing bends and stuff, and my muting is all over the place. But it’s already easier to play than my Jazzmaster (which I love to bits but it’s always a bit of a collaboration with the thing rather than it doing what I want).

Absolute steal for £150. The tuning pegs are nasty plastic, as is the trem arm tip, but that’s literally the only thing I can criticise. Slightly sharp frets on the bass side up at the dusty end but nobody plays those anyway. It’s a mahogany guitar with a rosewood neck for £150 ffs, absurd.

Has anyone got experience of putting a single coil sized humbucker into a Mustang bridge? I want to do it on mine sometime soon. Googling keeps bringing up Seymour Duncans, with their JB Jnr sounding good, but they are around £110. Any good UK builders making similar? Top tips most welcome.

I now have 3 hand-wound pickups from Alegree; a really nice tele pair that somebody had installed in an Asat I bought, and recently I put a humbucker sized P90 from Alegree in the front of my Asat semi. They all sound great. UK, hand made.

They keep getting good reviews on Fretboard too, although that isn’t really my scene.

For really cheap, it’s hard to beat Wilkinson, but they don’t have much mojo!

(Doesn’t look like Alegree does what you want, so that was a bad recommendation!!)

I find the pickups a bit dark, I must admit. Old strings make them worst, noticably. I’m going to put a pair of cheap P90s in mine over Christmas I reckon.

Agree on tuners; one of the plastic heads sometimes vibrates which is a bit annoying, but not annoying enough to fix yet!

As you say, you can’t beat the value and they are definitely worth tweaking into shape!

I find the pickups a bit dark

Yeah, me too. I can see those being swapped out in the future but I’m going to give it a bit of time to get used to it, do the signal chain tweaks etc. Plus it’s not the worst thing to have a much darker-sounding guitar to hand, no point trying to make it sound like something else I’ve already got.

I’m in a similar boat to you as my majn guitars are all pretty shrill! Teles and JM and wierd-strat, so even my old Gretsch was dark in comparison, and the SG really is.

Much easier to find a place in a mix for bright stuff, but as you say; no point trying to get an SG to sound like a Jaguar!

Do you think the 35 would be too loud for practice at home without headphones? Sorry to spam with questions!

No worries about questions at all. It can be a v loud amp if you want it to be. I prob play my 60 too loud at home but the master volume helps. I did have the 20 when I first started out, great for home and rehearsals, the small size is deceiving. The 35 is well worth checking out if you can test run it at Gak before any purchase, get a feel of it. The friend has one for her home use and gigging too, no problems. But yeah, “too loud” is a tricky one, my wife often comes home saying it to me, especially when testing out a new Fuzz War, haha. The 35 is cool in that it does sound good at low volume too, like all the Crush range. I used to have one of these. It’s an HH Musician VS100 (i think the model is called)