I never saw Husker Du but I did see Grant Hart solo a number of times. Always great live, and he came across as a nice guy.

Variety has confirmed that Grant Hart, drummer and co-lead singer of influential American indie band Husker Du, has died. He was 56 and had been battling cancer. Around 11 p.m. Pacific Time, the of…

Posted this in the other thread.

He had been quite ill for some time but I’m still shocked by this. I met him a couple of times when my mates were in his backing band in 2012/13. I really liked him and was amazed that I was able to meet a man who played in one of my favourite bands and one who had written some of my favourite songs. R.I.P. Grant.

Ah, I missed that. Pass For Press day here at work means that all the CPMs are rushing around and getting me to fix their fuck ups. Which leaves me less time for dicking about on the internet.

I’m not a huge Husker Du fan, myself. But I liked Grant Hart a lot. Saw him play a bunch times over the past 15 years.

You’re okay! A separate thread is fitting for Grant!

Like I said above, my friends played as his backing band for a year or two and I got to see him perform a few times and he was excellent every time. Saw perform an acoustic set in a record shop here and he took requests from the crowd and it was amazing.

Was just listening to the stream of that new Numero boxset the other day and thinking ‘wow, they’ve cleaned up these early recordings real good!’ 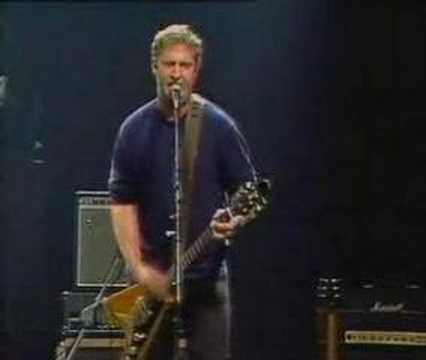 Properly cut up about this. RIP you beautiful, tender bastard

Sad times. Weirdly, I’ve been listening to Husker Du loads recently and dipped back into their chapter in Our Band Could Be Your Life. Love the description of them playing live in that and of Land Speed Record - something about referring to it as barely being music, just a rush of noise and energy.

This is rubbish news. I love Hüsker Dü

Just from that still I can tell that this video has been in my YouTube favourites list for as long as I can remember.

Sad news this. Seems particularly poignant when I’ve been blasting that new compilation all week.

Grant’s first solo album, Intolerance, is one of the great unappreciated records. Will dig it out when I get home.

Been meaning to get into his solo stuff for some time. I’ve had Intolerance lined up on a Deezer queue countless times but never got to it

He was a total legend. Be thankful for the music.
I saw Husker Du on the Candy Apple Grey tour and again at Glastonbury 87. The first show was to a quarter full Powerhouse in Birmingham. I’d only seen a handful of gigs at this point and the no frills show changed my life. This was pre Napalm Death and music agreeably getting too fast. Beneath the buzz and feedback of Husker Du is near peerless Beatles esque melody and talent.
I come back to Husker Du every 5 years or so and am never left cold. Zen Arcade likewise was a life changing album. A few years back I dipped into his latest (solo) album and was staggered at the quality.
Seeing the news today I genuinely got a lump in my throat. A musical mentor and a life mentor too of sorts as in learn from his mistakes. Such a loss. Such an overlooked real artist. I wrote this a few years back for those that may care to read. RIP.

Whilst Husker Du are one of my all-time favourite bands I must admit I didn’t even know this album existed until a few days ago. Grant Hart is arguably the more skilled songwriter from Husker…

Always found Zen a bit too samey and long (although the songs are short bursts), New Day Rising has always been their pinnacle for me

Had a bit of a wobbly moment listening to ‘Is The Sky The Limit?’ this morning. Fucking great song.

Listening to Zen Arcade on the coach and it’s just so perfect. Candy Apple Grey next for me. Another old blog post for those feeling this.