With its plethora of islands - over 227?! - Greece isn’t exactly lacking on the archipelago front, and because of that were struggling to decide which one(s) we’d like to relax and explore next summer. I’ve only ever been to Corfu, and that was only for one night before we took the ferry over the Ionian Sea to Albania, so my personal knowledge of the Greek islands is severely lacking.

Was wondering if anyone can offer some recommendations, please.

Ideally we’d like somewhere not too touristy. So not Mykonos. Somewhere with quiet, picturesque villages, nice hikes, beautiful beaches etc. A compact island that’s easy to travel round, either by public transport or by foot. So not Crete.

Never been, but I know someone who goes to Milos at every opportunity, so that one is probably nice. Think it’s where they found the Venus de Milo, which makes sense really doesn’t it now I think about it

Phraxos. Had a bit of a weird experience there, mind.

Last time we went we did a bit of an island hop Mykonos (awful place), Paros, Naxos and Santorini (which everytime I’ve been is fine).

Big fan of Paros particularly where we stayed Naousa but, last year it was on one of those top 10 new places to visit. So it’s probably a bit bobbins now.

I’ve been to Santorini twice (once with family, once with my wife) and loved it both times. We had a car so can’t vouch for how easy it is to get about with public transport, but we could get to the other end of the island and back in a day.

Plenty to do, you can hop on a boat to the caldera, they’ve got vineyards you can visit, and I think there was a Roman archeological site/museum too unless I’m getting my islands confused. And other bits and pieces to check out around the island. Enough activities to fill a week up anyway, and lots of nice restaurants etc

We stayed in Oia in this hotel/apartments both times, hosts were lovely and it was in a good spot 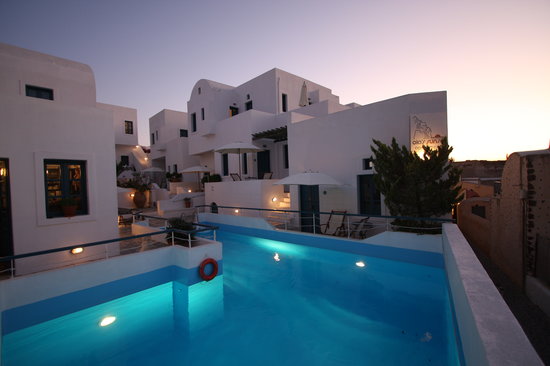 Skiathos is amazing. It’s basically a town and then a road dotted with beaches and hotels and tavernas. Landing there is exciting too

Thanks for the advice and accommodation tip. Santorini does look stunning but there’s no denying that it is very popular. Will have to decide if our desire to go outweighs that fact…

I’ve been to Kefalonia and Corfu and liked them both a lot. Probably preferred Kefalonia, it was really tranquil where we stayed

The only Greek island I’ve been to is Symi. It’s tiny but lovely. I know someone who has been going for years so went on his recommendation. There’s not an awful lot to see there but it’s very peaceful. It’s basically one big rock so there’s plenty of hiking to be done. There’s a monastery there that you can visit and if you’re into boats there’s boat stuff you can do. We mostly just got a taxi boat to the beach and ate and drank.

Kefalonia does seem to tick all the boxes.

How long did you go for?

I’ve been to Kefalonia and Corfu and liked them both a lot. Probably preferred Kefalonia, it was really tranquil where we stayed

+1 for Kefalonia. Would also recommend the next island up the archipelago, Lefkada, which is even more unspoilt. You can get the ferry over from Fiskardo on Kefalonia

Kefalonia is nice. I’m mainly dropping in to inform any at-it Brits that the emphasis is on the final A in Kefalonia, not the O.

I’ve been to enough of the islands that I mostly can’t remember one from another. Lesbos was my favourite but it was a long time ago that I went and it may be very different now that it’s full of refugee camps.

Wherever Nicholas Urfe stayed in the Magus.