Decided to break out the old Guitar Hero yesterday. Still as good as it ever was and I’ve still got the mad skillz. Unfortunately in it seems like the kids of today aren’t interested any more because as far as in I can tell the last guitar hero/rock band game was released in 2015 which is a bit sad IMO.

Anyway, I smashed through my go to song, the Strokes’ Reptilia, which my kids greeted with a rousing chorus of “can I go now?”, but they soon got into it.

Any GH memories? Go to songs? Unverifiable claims of beating everyone if the opportunity arose? I mean, you wouldn’t beat me but you could pretend I guess.

Here’s a rock band memory (if you’ll allow it).

Back when my ex was doing a PhD at Oxford, we’d occasionally go for a formal dinner at her halls. The first time I went it was with some important professor types she worked with, so I was a bit nervous about meeting these Oxford people and inevitably being the least posh one there. The best thing about it was that the booze was free, as in you just drank wine and your glass just kept getting refilled. As a result, and being too nervous to join the conversation much, I quickly got properly smashed. My first realisation of this was the sudden great idea to start conversation about things totally unrelated to anything we’d been talking about already.

Shortly afterwards, realising the difference in drunkness, after dinner my girlfriend suggested that I might like to spend a little time in the common room they had. I realised that this was probably a good idea and went off there. I was sat minding my own business for a while, with no-one else in there, the room spinning a bit, and generally feeling bad that I was spoiling the evening. Then in walked three guys I’d never met before who saw me and asked if I minded if they played Rock Band on the projector. I was sat right in front of the projector and was in no state to move, but said, yeah sure, don’t mind me.

I’d never seen Rock Band before, so I was fascinated to watch them play it. They were pretty good, but it was more about them having a laugh. I noticed that there was one item that wasn’t being used in their ensemble, and it was the microphone. After a few songs which I kinda recognised, the next one coming up was The Beautiful People by Marilyn Manson. At that point I decided to ask if they minded if I joined in, and joined in I did. I was loving it, belting out the arranged vocal line, getting so into it I was standing on the sofa like we were playing a stadium or something. A few songs later, with the same intensity of vocal delivery for each and every tune, my girlfriend walked in and saw me on the sofa rocking out and instantly walked back out again, mad.

She was so upset that I had clearly felt better enough to start “playing games” but then didn’t rejoin them. Truth is, I didn’t want to rejoin them. The Rock Band bit was the absolute highlight of that night. I was rocking out with absolute strangers and we were amazing. It was enough that not long after, I bought it for myself and still remember it fondly.

This is a good read 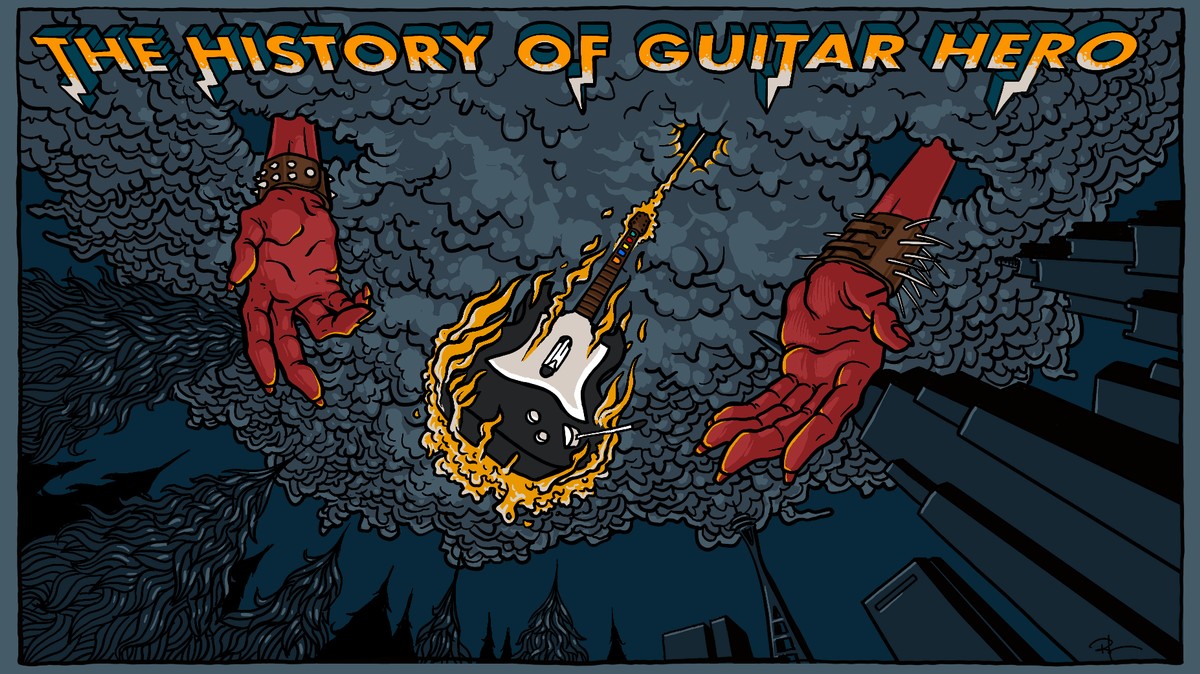 The Oral History of 'Guitar Hero'

How to accidentally change the world.

Never had Guitar Hero but my housemate in uni bought Rock Band. The Beatles Rock Band actually got me into them as a band, had always known the big hits but it made me realise how much there was to them.

Used to really enjoy these and me and Emma always said once we had the house we’d get it again, but it’s…outrageously expensive now. Like £400 expensive.

Never had it myself but loved playing with my mates.

When I lived in Gateshead with a pal he had a full Rock Band set up and I played the drums every chance I could, actually felt like a good workout when you got decent at a song - my fave was Thrash Unreal by Against Me.

Had a stag do a few years ago where we rented a cottage and people bought all the stuff for a full Rock Band set up, was ridiculously fun as a bunch of grown men, being drunk as fucks, doing over the top karaoke in the living room, stage diving off the sofa etc

Yeah, this is where I ended up last night, looking for the most recent version and only finding what were obviously some special limited edition versions which were £400 - except that seems to be all of them, that’s just how much the last one costs. I cannot remotely justify that kind of money.

Also there seems to a be a very active community of people who still stream themselves playing at ridiculously high standards, I gather that you can now upload your own songs so it’s just people playing nonsensical speed metal.

Looks to me like you don’t need to strum every note any more when they’re going that fast, they can just tap the fret buttons, not sure if that was always the case or is a new advancement.

Must be sets going cheapish on Facebook marketplace and so on, loads of people won’t know the value of it and just want to clear out the plastic tat

Not gonna lie guys, I really coveted the optional smoke machine and lighting set up.

Ebay didn’t offer much hope but I did only have a brief look. Going to investigate properly tonight.

Ebay is full of gougers who think they’re going to flip big profits on everything, definitely worth looking local and hope you get lucky

I couldn’t find work for three months back in…whatever year Rock Band was out and ended up just playing the drums for the entire period. I was as depressed as I’ve ever been but fuck did I get good at Foreplay/Longtime by Boston

I get good at Foreplay

Are 2nd hand prices really so inflated?
Ive got a couple of the guitars and a rockband mic still.
Had them on wii so obvs once I had my wii hacked it was handy getting all of the GH/Rockband games riipped to the one harddrive so was easier to nip between the games to do particular songs/playlists.
Do you know what was pretty great? When they opened the dlc to lots of indie bands. Playing Apples In Stereo and New Pornographers dlc tracks was brilliant.
Was never one for Dragonforce style ott zaniness but was well in playing tracks like Holiday In Cambodia and Helicopter.
Yeah the Beatles one is pretty great. The Metallica and AC/DC ones are okay too.
Anyone else remember the time you could get free instruments off Activision? Think its how I got my 2nd GH guitar.

Forgot that I have neither a wii nor any games 😵‍💫

Buy a cheap 2nd hand wii, a 2gb sd card and a 128gb pen drive and within a day you can now have ALL the games I believe

Yeah that was the plan, but for some reason I started with the peripheral and never got round to the rest

I have my Wii U hacked but I think my next project (once my retro video game nook is finished) will be to have a pen drive of Wii U backups and a pen drive of Wii and Gamecube backups all on the Wii U so the wii/GC games can be enjoyed in HD and so everything just in one handy location really.

me and my wife were well into this back in the day - had Guitar Hero 3 (I think?) on the Wii and then got all the Rock Bands on the PS3. my wife is a big beatles fan so we have two of the special guitars they did for that (the Paul McCartney bass one is literally two metres away from me right now), drums were fun too and I even havr the keyboard they released for Rock Band 3, never really used it much though cos on Pro mode it was too hard, and on normal mode it was too easy.

I always played bass and my wife always played guitar, and she was slightly better than me I think. Good fun teaming up and trying to get the gold stars on a song.

I also quite like Rocksmith, was playing that a bit recently. obviously harder cos it uses an actual guitar but the dynamic difficulty is neat and I did feel like it was helping me get better at the guitar, until I stopped playing and have probably lost all progress again. oh well.