Guys... apparently Adam Sandler is in something good again 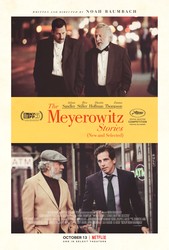 The Meyerowitz Stories (New and Selected)

The Meyerowitz Stories (New and Selected) is the emotional and comic intergenerational tale of adult siblings (Adam Sandler, Ben Stiller, and Elizabeth Marvel) contending with the long shadow their strong-willed father (Dustin Hoffman) has cast over...

Anyone going to give this a watch?

I think he’s like Jim Carrey - he can do good things, but instead chooses terrible comedies because $$$. Punch-Drunk Love is a 2002 American comedy-drama film written and directed by Paul Thomas Anderson, and starring Adam Sandler, Emily Watson, Philip Seymour Hoffman, Luis Guzmán and Mary Lynn Rajskub. It follows an entrepreneur with social anxiety in love with his sister's co-worker. The film was produced by Revolution Studios and New Line Cinema, and distributed by Columbia Pictures. It features the video art of Jeremy Blake in the form of visual interludes. The film received positive reviews f...

Is this going to be one of those things where he gets disproportionate acclaim for being surrounded by more talented people and just playing a toned down, vaguely weepy version of himself?

Think someone’s hacked the happy Gilmore will entry there

No cinema release for this?

Somebody hasn’t seen ‘that’s my boy’

Showing at a handful of Curzon cinemas in London, not sure about the rest of the UK

Watched this, thought it was decent but Frances Ha is still by miles the best thing Baumbach has done (yeah, I know loads of people here hate it). Saw someone who suggested this new film works as a sequel to Squid and the Whale set decades later which kind of works.

Billy Madison is his best film
Followed by Happy Gilmore, Punch Drunk Love, and Reign Over Me.