The site and forums went live on this day in 2000.

Can you think of one thing about your life which would be different if you had never stumbled across these forums? Could be a friendship or a music discovery or life decision or…

I’d never had to knock on wood

For me, it’s not about the individual music discoveries, but the enthusiasm of people on the boards. Without that, there’s tonnes of stuff I wouldn’t have given a second listen to.

Could probably do a very long Creme Brulee-esque post about my old band, but in short I had all my (markedly unambitious) dreams come true and I don’t think we would have got half as far without the support we got on here.

In all seriousness, DiS has

I might have got to all of these points without DiS but it’s been a massive influence.

Loads of my friends and several relationships including my current one are all people on the boards. You’re a right bunch of babes. Can’t get enough of you.

I would understand far less memes

If I hadn’t had DiS to distract me I’d probably be earning a fat wodge and driving around in a Beamer.

But I wouldn’t have had the laughs. And isn’t that what really matters?

This was so touching. Hope you don’t mind me sharing it

@seaninsound
One of the first replies to the DiS is 21 post on our forums just kicked me in tear ducts community.drownedinsound.com/t/happy-21st-b… https://t.co/LtXQ6LyN2H 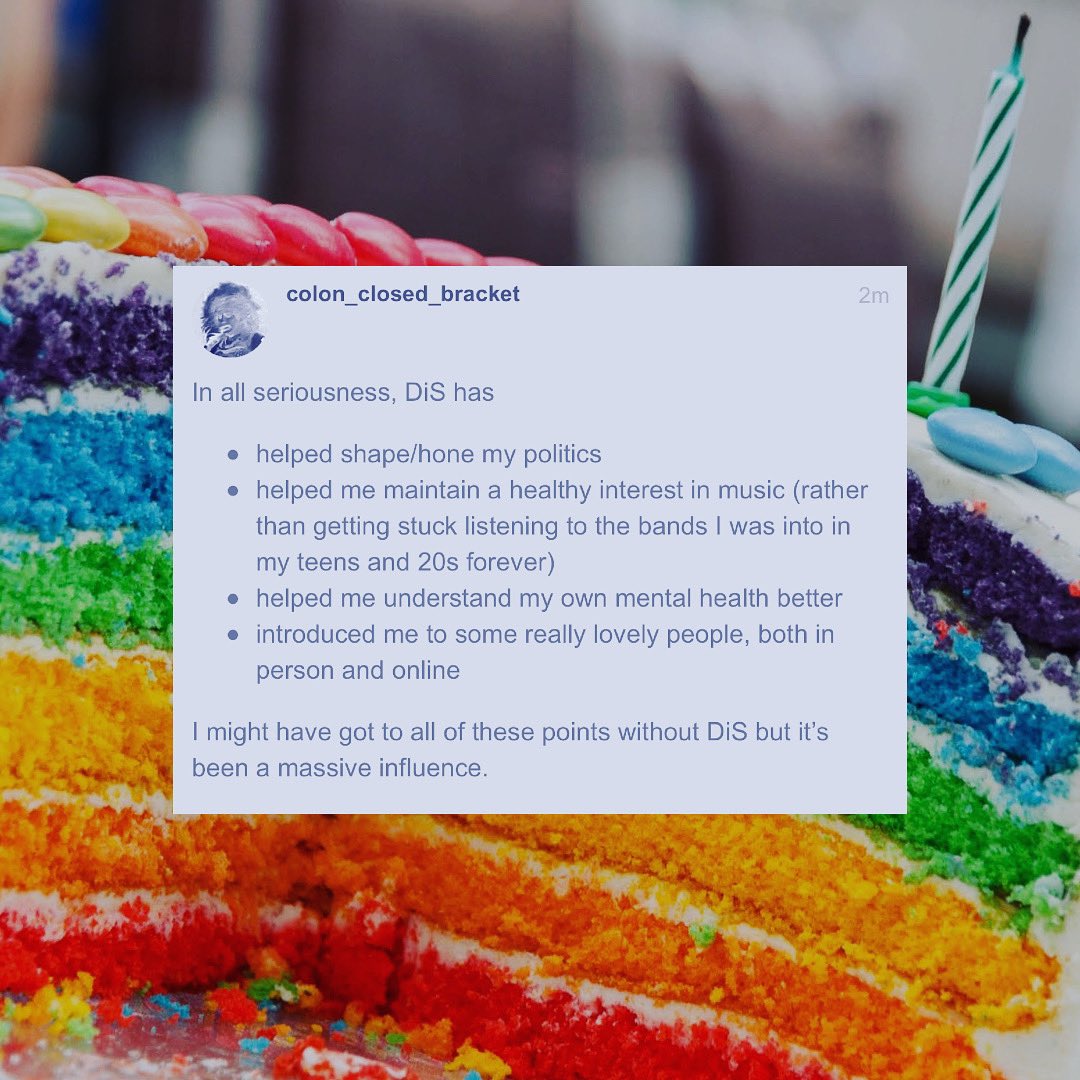 Yeah that’s fine with me

I was gonna say as well: credit to you, the mods and others for keeping DiS useable - especially with the migration to the new boards, and recently splitting it up into sub-boards (esp. with the How To DIS part). I’ve been on here for 15 years (yikes) but it’s nice that we’ve had a steady stream of new people joining especially over the last five years. Obviously the people on here make it what it is, but if you can turn up on a forum and think “yep this looks bright and accessible” then it’s another reason for people to stick around. So yeah, good job Sean, and thank you

Came for the music. Stayed for the fish puns.

I’m not sure what I can add beyond what CCB says. This place is a real community and while a lot of places on the internet say they are. This place actually is. It’s friendship, banality, humour, support, education and just… warmth, all rolled into one space.

There’s something really unquantifiable about DiS that makes it special. Like a tonal understanding where we can pile onto a silly typo someone makes with endless jokes, but we’ll all be there to put an arm round that same poster if they need it. I think it helps that people do generally engage in good faith.

(I became a much more active user after the move to Discourse btw so I missed a lot of the bad old says stuff on the old forum. What I’m describing above is how I see this place in 2021).

What’s next for DiS?

Due to an ongoing harassment issue from a deranged musician (dealing with the police is very time consuming) which reared its head again last October and peaked in January with a string of malicious communications, as well as switching jobs, I stopped my weekly DiS newsletter but planning to bring that and our podcast back soon

I’m not sure when I became a regular poster on DiS, I think it was the change to the new board, I just lurked before.
I’m not sure which bands I found on here but there are loads. I’ve also really enjoyed the listening clubs and the HGATR threads. The HGATRs have helped me reconnect with bands I hadn’t listened to in ages.
The board has been amazing over lockdown, I’ve been talking to people on here more than my IRL friends over the last 18 months.
I’m looking forward to the next meet up so I can hug you all

The laughs, the cries, the good people and the tossers, the fun I’ve had and the heartaches, going from edgelord uni wanker to somehow now being admin, discovering so many new things and learning more about myself and others, from knitting advice to film clubs and secret santas and raffles and aqos and all of it. No place quite like it, for better or worse

DiS is without a doubt my favorite place on the internet.

It is such an amazing community where I have made, and continue to make friends. It’s been a massive source of support over the (16!) years I’ve been here, through the ups and downs in life. It’s great to be able to laugh at silly posts and also engage in serious discussions. I still discover great new music via posts on here too.

I’ve got a lot to be thankful to DiS for.

Made good friendships, got to write for it and bag a ton of free CDs / gig tickets (which helped me in my job), played a ton of football, had some decent games of Rocket League online, had my world view challenged (and improved) and (back in the day a bit more than how I use it now) wasted far too many hours here finding out about obscure bands and making hours of puns.

Been a big part of my life and it’s helped me find my feet in London, which otherwise I’m not sure I could have.

If I had never joined DiS I would never have met Bob Mortimer.
What more can I say?