Perfect - thanks for your help!

Us Nordics have to stick together

It’s impacted all my buying

Buying from the UK and shipping to Sweden is hell; takes forever and costs a fortune

They publish reports and lobby government and members will bring forward motions and members debates (but ymmv on the value of those have since motions are non-binding on government).

I’m not saying not to engage, it’s just important to understand the distinction between this and eg a Government consultation on actual policy proposals.

I very rarely buy thing from Europe so I haven’t had too much trouble think there was something from Germany that was a day late during the summer.

One thing that is a bit weird is I thought records from the US would shoot up in price based on nowt really but, the prices from there have stayed surprisingly stable.

I’m buying less vinyl than I used to cos it seems to have jumped up massively in price and it is hard to justify spunking £30 on a single lp when it seems like not long ago they were £15 and the ones that were £20 felt like they were taking the piss a bit.

Not sure how much of this is brexit and how much is pressing plant issues/ end times capitalism woes.

Rather annoyingly what this had meant is that I’ve spent way more money on reissues than new releases for the first time ever this year. When Isis reissue Oceanic and Panopticon I feel like I can afford to pay over the odds for them cos they’re some of my favourite ever releases, same with p j harvey and spiritualized. But that new Cassandra Jenkins Lp? That’s £30 for a half hour lp that I love now but will I love it in five years time? Maybe, maybe not. So I hang onto my cash.

One of the real underlying problems here is that the people who are now getting my money are ‘legacy acts’. They probably don’t need it as much as current artists. Also, like a lot of other people I bet, the music I used to listen to tended to be mainly white and male and I’ve made a conscious decision to push against that in recent years. But if I’m buying safe reissues from bands I’ve loved for years then the established white male artists are getting more of my money. And I feel like I’m turning into my dad.

I’ve shied away from buying from Europe, which I used to do a lot on Discogs, because of horror stories about delays and charges. To be fair though, the couple of times that I have done so it has been fine.

One of the real underlying problems here is that the people who are now getting my money are ‘legacy acts’.

Also for some of them, unless they recouped their deals that money is probably just going toward the bonuses of major label CEOs

@IvorsAcademy
Universal Music Group boss Lucian Grainge is set to earn more in 2021 than all songwriters did combined from streams & sales of their music in the UK in 2019. "There’s only one word for it – obscene" @crispinhunt bit.ly/3ktjEEQ 🔄 Share this post if you agree (1/2) https://t.co/3i7W6ZOs9P 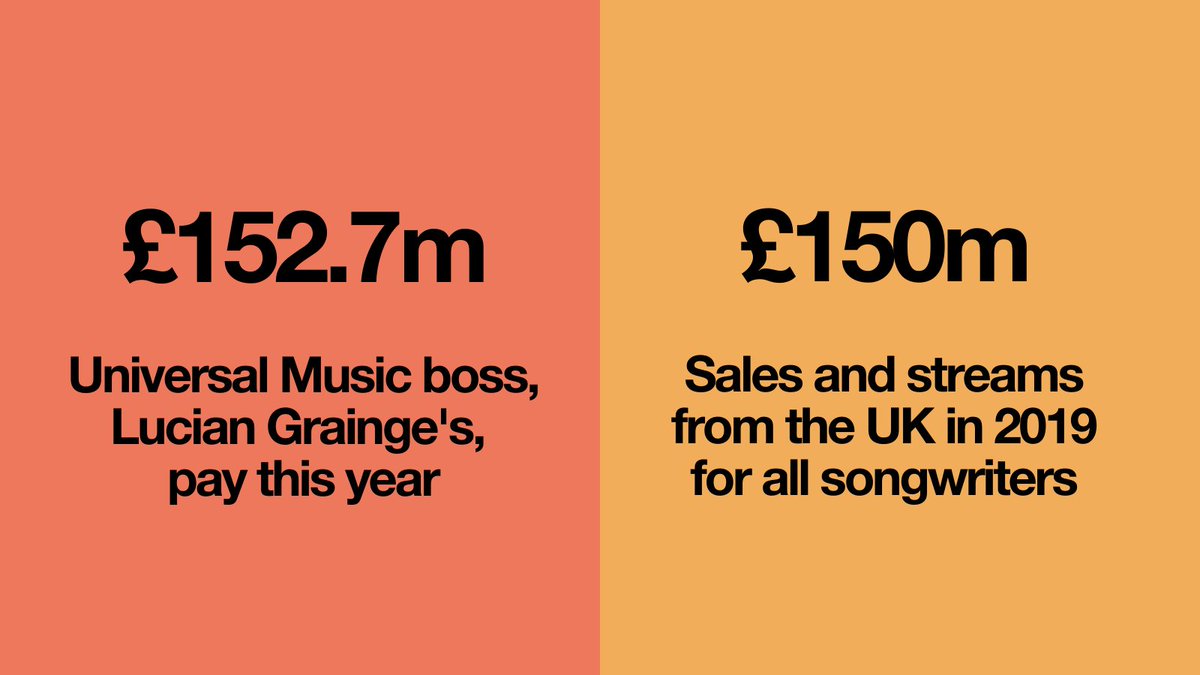 Used to really like buying stuff direct from labels whenever possible and did this a lot. Prices were always comparable (usually less) to getting the same record / cd / tape / whatever from a distributor and even if it cost a little bit more, I used to like supporting smaller labels or artists directly. Stopped doing this for the USA a little while ago cos US international postage rates went absolutely bonkers a few years back. The extra hassle, cost and time to do the same thing for the EU after Brexit means I don’t do that now either.

This all has certainly meant have stopped buying as much physical music, as if you can’t get it from UK outlets, the extra taxes and postage costs just aren’t worth it. Also like @Scagden says, usually means that the physical music I do buy tend to reissues rather than taking a chance on a new artist

Used to buy lots of old jazz and folk / world LPs on Discogs from EU as there was often better choice and good prices. It’s really noticeable now that many sellers are barring sales to Britain and when you add in the addition of VAT on top of the sale price and postage it reminds of another reason I fucking hate the Tories.

To send a record to the UK from the post office used to take seconds - they stuck it on the scales, selected UK from the computer, printed a label and you paid. Now takes about ten minutes to complete the paperwork for each item. The staff audibly sigh when they see you are sending to the UK. For some reason it is more complicated than sending to other countries outside the EU, I’m guessing some sort of software botch just makes it less intuitive.

So fine if you are sending one or two items but I imagine lots of EU sellers have decided it’s just not worth the hassle.

@Tim_Burgess
So, @thecharlatans can’t sell merch at our Dublin show (reason: the total shithousery of Brexit and all it brings), which means it can’t be on the truck that goes to Belfast. Not huge news but just another totally rubbish result from our collective stupid decision. Message ends
3 Likes
thesewoodenideas 16 November 2021 19:56 #55

Fuck sake.
Im going to the Belfast show too. 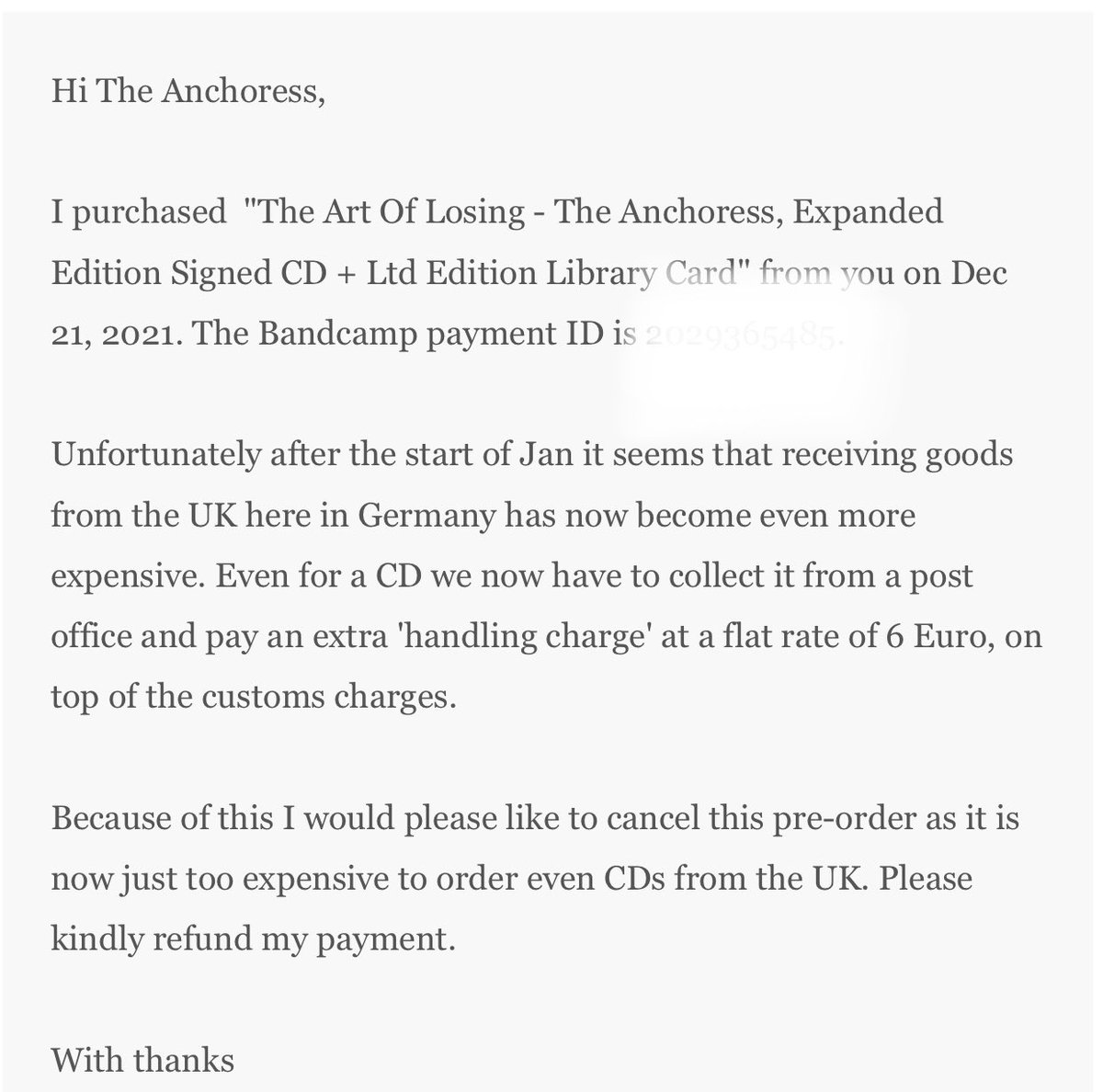 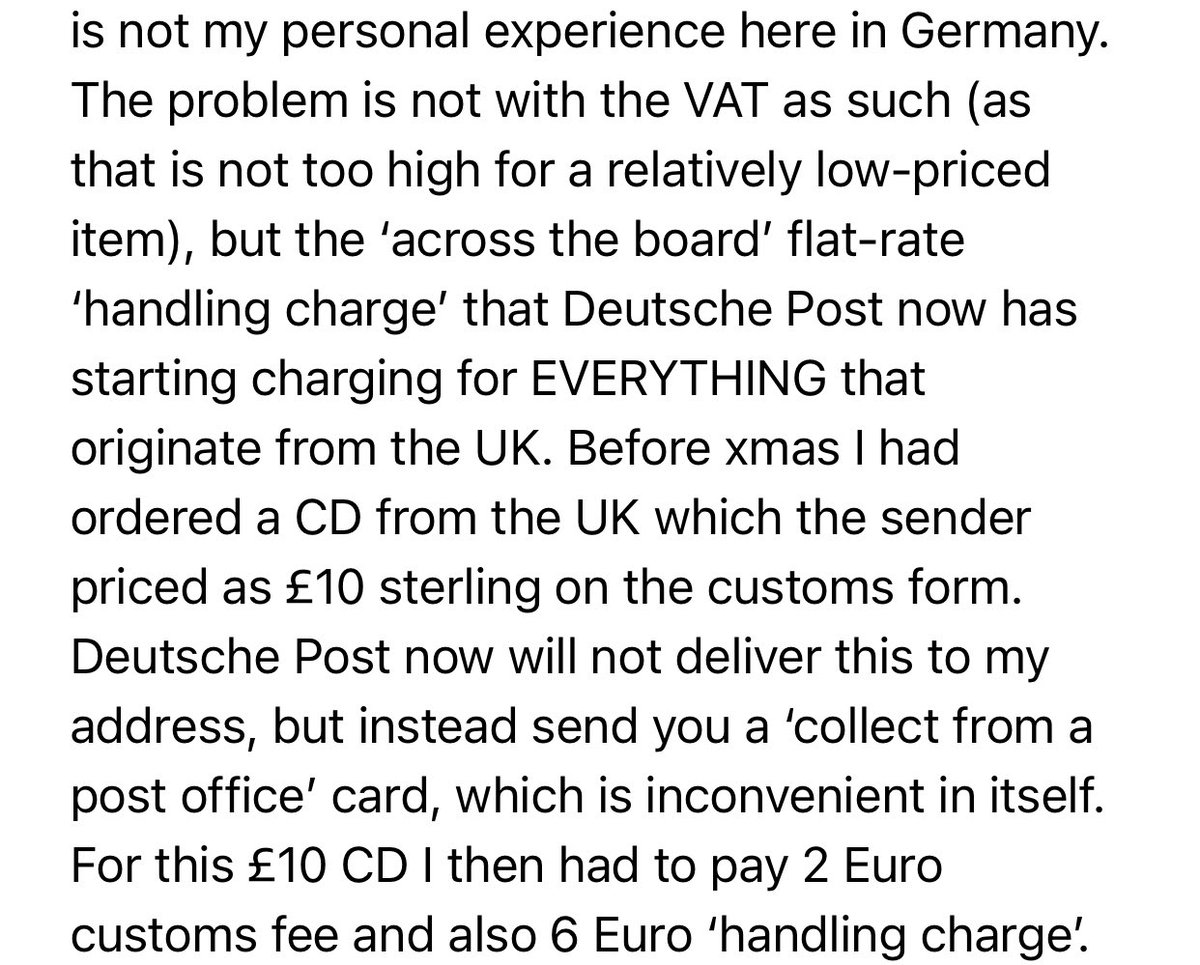 Only had this discussion with my friends this morning. There’s absolutely no value in anyone from Ireland (in our case) buying from the UK anymore. I’ve always bought from our local record shops but I’m specifically only buying from them from now on.

yeah it’s fucked, literally everyone involved in a record store/distro i have spoken to has stopped doing EU orders (i’m based in england) which is having a major impact. It’s a disgrace.

It’s grim. I’ve not bought (or sold) anything outside of the UK since they got Brexit ‘done’. Fortunately during Lockdown #1 I had a clear out of those albums I was keeping for that one track (which I could now stream) and shipped stuff all over (US, Germany, Russia, Australia) - it just wouldn’t be possible now.

Repeating myself here but yeah the last record I bought from the UK cost £21 and then €25 in taxes, processing fees etc at this end.

Also can take literally months for things to arrive, tracked shipping shows things get held up for weeks at the UK port depot then again once it’s arrived in the EU.

Have a few pre-orders with Norman’s at the moment and gawd bless em they have adjusted the vat and are handling all the extra paper work and fees for £1 (they’ll be loosing money on that) so I’ll see how that goes. Last order I’d made absolutely did me so much as I want to support them if I still get done for extra charges it just won’t be worth all the hassle anymore. 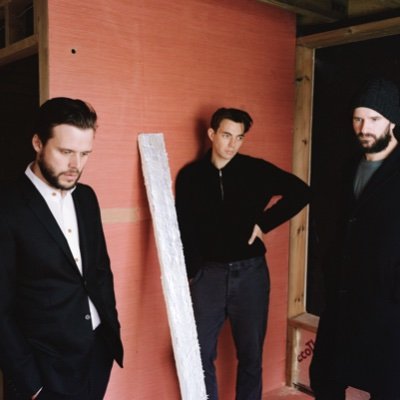 @whiteliesmusic
Tonight’s show can’t go ahead, even though we are in Paris. We are so gutted to announce this. News on rescheduling ASAP. Details below. https://t.co/YDqJKjeJCJ 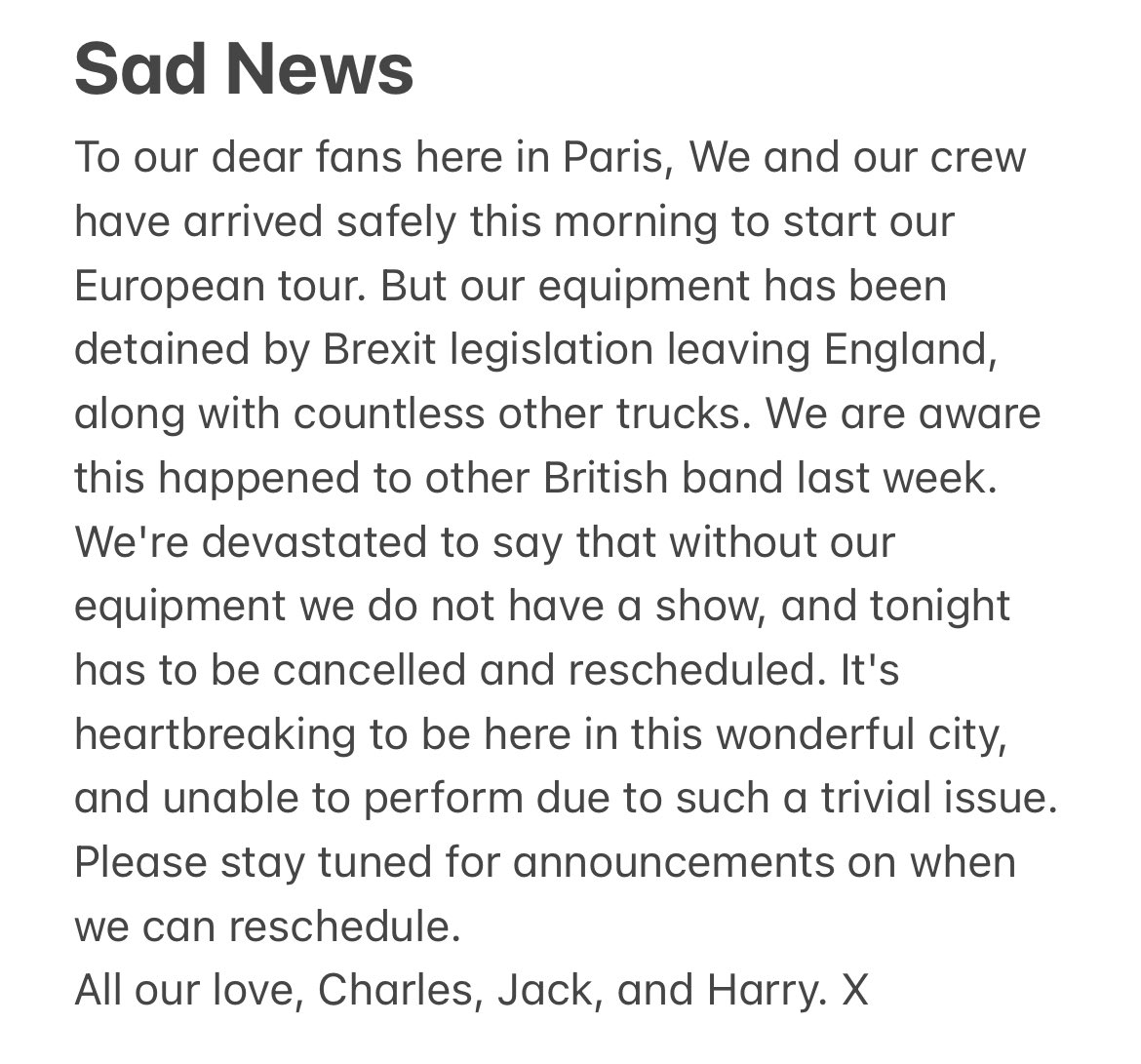 On a related note How has Brexit impacted your sales and touring?