Might be doing the ring of steall apparently. In march.

A) will i die?
B) are there any mountain huts/bunkhouses nearby to use the day before or whatever?

Always thought that walk looked superb. As far as I know, the walk up and down are hard going, but it’s pretty easy going when on the ridge itself. Supposed to be exposed, but not dangerous.

There’s a campsite and youth hostel on the Glen Nevis road, but the bunkhouse at the foot of Ben Nevis is the better accommodation (and has the better bar and food!).

ooh nice! I was meant to do that this summer but like idiots we picked the same weekend as the race round there

so just did another route instead

walkhighlands is the goto for advice The Ring of Steall, Mamores

The Ring of Steall is a real classic mountain route combining the traverse of four Munros with scrambling along narrow, rocky aretes. The route takes in An Gearanach, Stob Choire a Chàirn, Am Bodach and then follows the Devils Ridge to Sgùrr a'Mhaim.

The youth hostel is beyond bleak though

It looks it. Not sure if it’s had a lick of paint since I first went to Glen Nevis in 1994.

You need to sing LOCHABER NO MORE as you hike.

Also the mountain range is named after breasts (mammaries).

I haven’t done that particular route although I’ve climbed Am Bodach from Kinlochleven when I did my Duke of Ed many years ago. It was fun but hazy, think I was drunk on cherry brandy stolen out of my parent’s booze cabinet.
Which point are you starting from?

Thinking of doing the West Highland Way next year.

Love me some walking.

Do it. One of the best weeks walking I’ve done. 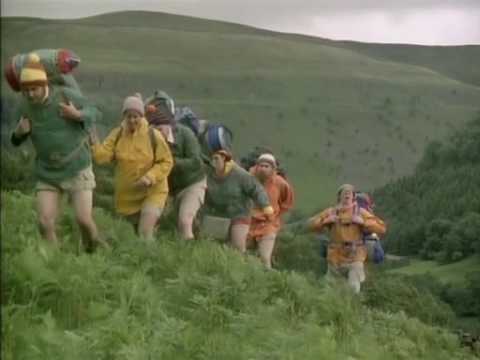 determined to organise a DiS ramble next year

This is a legit serious concern. Very good chance of snow and ice in March. In particular the section along the Devil’s Ridge to Sgurr a’Mhaim is narrow and exposed. For sure you’d need crampons with snow and/or ice around. Great route though. Good description here: https://www.walkhighlands.co.uk/fortwilliam/ringofsteall.shtml

march is right at the transition point to okay weather so depends if you’re going early or late in the month as to how bad the snow will be but i’d still be taking an axe and crampons either way, even though you might only need them for short sections

folk have died on those parts so take it seriously

We climbed Ben Nevis in June and there was a good 5 inches of snow on the approach to the summit. Was pretty dicey

https://twitter.com/theiaincameron?lang=en this guy monitors snow patches in Scotland and only one made it through the whole year this year (near Glen Nevis). I was in the Cairngorms this August and there was a patch still there, but that went some time in September.

i use this site for weather forecasts

Yeah, it’s good. I like their regular use of ‘tortuous’. Usually cross-reference it with these two:
https://www.yr.no/place/United_Kingdom/Scotland/Ben_Nevis/

thanks guys. I’m going with someone who knows what they’re doing and we’ll have crampons. Aiming for sometime around the equinox, so late March.

Did the first hill of it last summer. Started too late to complete the wheel. Beautiful waterfall just before the climb starts. It’s a little tricky finding the path at first, but once you do, you’ll know you’re right. Amazing part of the world. Enjoy.