🎵 How Good Are They Really 🎵 Garbage

I’m only happy when it’s HGATR…

Everything Everything seem to split the boards completely in two:

Loved the first album but my flat mate in uni overplayed it so much that I can’t stand them any more.

Got a soft spot for the first album as it was one of the first albums I bought with my own pocket money when I used to walk town after secondary school - along with What’s The Story (Morning Glory), The Great Escape, Different Class and The Bends - probably so well ingrained that I could sing along to every line if I put it on now despite not having listened to it once in the past decade.

The subsequent two albums were pretty dire except Cherry Lips (Go Baby Go) which is a banger.

Peaked with their first single. Shirley Manson seems a GBOL so it’s a 3.

Think I only know the bond theme

Like most people I’ve only listened to the first album, Version 2.0, and the James bond theme.

They’ve just put out a new single and I almost fished for Deep Blue to come back. It sounded bad.

That said, I enjoyed that first album a fuck load at Uni and really got into them. Had a white t-shirt with the album art on it.

So they get a 3 for the good times which is pretty much the first album and Cherry Lips.

I do recall getting Garbage 2.0 in a sale at about 5 quid. I’d heard the singles at the time and thought they were dreadful. I only ever managed to get about 3 songs in before I gave up.

Tricky one. I loved the first album, caught them live which was good, then was disappointed by the second album and pretty much stopped listening beyond that. Going with a 3 - Curve were always twice the band tbh tbf. 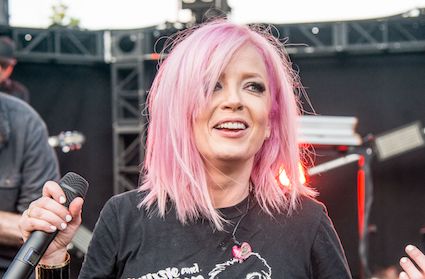 Every man over 35 still madly in love with Shirley Manson

EVERY man over 35 in Britain would leave his wife and children in a heartbeat to shack up with Shirley Manson, scientists have confirmed.

I was 12-13 when the first album came out - was probably my favourite record for a while. 2.0 was mostly shite, everything afterwards was worse.

A generous 3 for that first record as I probably still know every word.

Cherry Lips was always the song played at Popstarz (queer indie club at the Scala RIP) at about 4am where if you hadn’t had a snog yet it was probably time to go home so maybe I’m unfairly holding that against them.

Bland music with horrible clean production. Average debit with diminishing returns from there. Rubbish live too. 1.

First album was inescapable when I was at uni. Thought it was dreadful. Be interesting if anyone makes a case for the later stuff but seems doubtful. Nothing against them though, don’t seem any better/worse than say the Foo Fighters if you are into stadium rock and I’d probably take SMs vocals over an equivalent male rock singer.

New one sounds like a rejected QOTSA album track.

Literally opened this thread to see how many replies it took after the intro for a Devo reference.

Expected zero, but turned out to be one.

Love the first two albums, the rest is dreadful.

Vow was on 6music a while back and still sounded great.