🎵 How Good Are They Really 🎵 Guns N' Roses

It’s November and it’s raining, what better time for those! For the horrific lyrics to One in a Million alone it has to be a 1.

Obviously a band with so much to criticise, musically and otherwise. If I hadn’t been an uncritical thirteen year old boy when I first heard them I wouldn’t be a fan. It keeps that I’ve never paid all that much attention to lyrics other than the sounds they make. That said, some songs do just get instantly skipped (and not just the whole of Chinese Democracy)

Gone for 1. Sweet child is one of my all time most hated songs, just awful stuff

Gone for 1. Sweet child is one of my all time most hated songs, just awful stuff

Word for word this. Possibly the only band worse than Queen.

It’s a 1 but, have been always been fascinated by this, 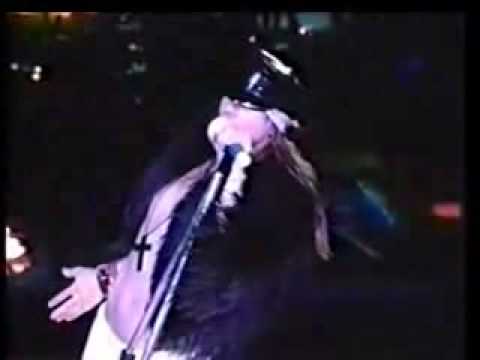 Tommy Stinson being in them for about 16 years and Slash being raised in Stoke.

Oh, Sean told me to tell everyone that use of this phrase now results in a catapulting.

They’re great
Appetite is one of the bwat debut albums of all time, just banger after banger

Not my thing in the slightest. This is probably my favourite album cover ever though, cracks me up every time I think about it It’s November and it’s raining, what better time for those!

Big fan of this kind of link. Looking forward to the Wyclef Jean thread in the next few weeks.

Sweet Child of Mine is actually legitimately great

Could give a fuck otherwise

It’s So Easy has my favourite bit in music ever.

Giving them a 4 as they are ropey post Appetite but they’re great, love them

Homophobic and racist lyrics. Sexual assault implied in the artwork for Appetite for Destruction. Terrible music. Axl Rose being an anagram of oral sex. Slash wearing a top hat.