🎵 How Good Are They Really 🎵 Iron Maiden

Come back from the hills, it’s the IMHGATR!

And now, let’s see what the number of the beast really is… And from ‘The Best Of The Beast’

Completely changed the sound of heavy music, yes it’s a bit cheesy but that run from the first album to Seventh Son is jaw dropping.
The fact that they’re still so good live is heart warming even if I don’t get on that well with the newer material.

As a fan of heavy music, I have to apologise to my brethren and say that I’ve never listened to a full Iron Maiden album.

They have been really good fun whenever I’ve watched their live videos or someone else has put them on.

I’m mainly in this thread for recommendations. I look forward to advice about albums and songs from those in the know.

Ooh, back to back rock opera bands!
2.

Don’t know many songs by them (though not entirely my fault as below). Only recognise three tracks in the poll, though prefer Phantom of the Opera to all of them. What album would sound most like that?

My first album was also supposed to be an Iron Maiden cassette but returned it because it was sides 3 and 4 of a double cassette album but I’d bought a single cassette album. They didn’t have the tape for the one I had originally chosen so I got this instead: Never did buy, or even hear, an Iron Maiden album in the end.

7th son of a 7th son was my introduction to them, and still my favourite album of theirs.

Ridiculous band of course, but cant help but love them. That run of 80s albums is insane. So many riffs, so little time.

They’ll probably get a kicking here, but they’re not playing to a home crowd are they? I have a massive soft spot for them in all their glorious daftness, but if I’m honest that doesn’t translate into listening to them all that much. Shame Rime Of The Ancient Mariner isn’t in the song list, I’d have voted for that in a heartbeat (and Powerslave is the best album).

Ooh, back to back rock opera bands!

Bollox.
While they have a pretentious streak there’s no Rock Opera bullshit going on here.

The Who could never write a 13 minute song about a Coleridge poem have it be one of the best songs ever.

I’m in the car with the TV most of the day and not going to get to listen to all the Maiden this thread is going to make we want to listen to. :

I can vividly remember the first time I listened to Maiden. One rainy lunchtime we were all sat in our form room doing whatever 15 year olds do. A couple of mates had been listening to something off an mp3 player that had them enraptured, and pulled me over to listen when they were done. They’d brought in Rock In Rio and played me Fear of the Dark. I’d never heard anything like it… the song itself was incredible, with Bruce’s soaring vocals, the insane musicianship, the way it absolutely crashed out of the intro and into the first verse, the solos, and pretty much everything else about it. But what really blew my mind was the crowd; 250,000 Brazilians going absolutely all out throughout, belting every word and note at the top of their lungs. I’d never heard anything that felt so vital and important, that mattered so much to so many people. I had to listen to more… and 24k scrobbles, several fan club membership fees, and a short-lived tribute act later, here we are!

There was definitely a point where I thought they were absolutely the best band on the planet, past or present. As time’s gone on though, I’ve become a little more measured learnt to view them with more of a critical eye. So while they’re the fiviest of fives for me, here is a quick and honest appraisal of my favourite band of all time.

Where I’ve struggled with them over time is lyrically, a lot of the time it seems to just be Steve picking his favourite old book/film/historical event or figure and writing about that. I mean, is there a European battle or anything from the literary canon that they haven’t written a song about? It’s a bit inane and boring at times. They also seem to be on auto-pilot a bit sometimes, especially when it comes to writing choruses and especially recently (how many of their choruses are just the same line repeated over and over again?). And they can lean a little too heavily into overblown cheesy prog territory.

At their best though, Iron Maiden are inspired, evocative songwriters, writing some of the most interesting and inventive music in the genre. Their best music is utterly captivating, and sounds fresh and vital, even at their most camp and proggy. I mean Rime of the Ancient Mariner should be fucking ridiculous, but it’s an absolutely mind-blowing piece of music. And songs like 2 Minutes to Midnight which actually stray into contemporaneous commentary, or emotional pieces like Wasted Years, show they can actually write good, important, relevant lyrics. Each member is easily one of the best musicians in their field, with no weak link whatsoever (as a bass player Steve Harris is my single biggest influence). They’re also one of the greatest live acts of all time, both as performers and in terms of the actual show itself. They’re not seminal to the genre in the same way Sabbath are, but almost every metal act from the 80s onwards owes something to them. For that, and for the sheer volume of excellent music across the whole length of their 45 year career, they deserve a 5.

If they’re treated anything like Metallica were I’m leaving the boards (for an hour).

As a fan of heavy music, I have to apologise to my brethren and say that I’ve never listened to a full Iron Maiden album.

Yeah, somehow never got round to them. Enjoyed the few songs I’ve heard and strongly respect their commitment to wearing their own merch when they play live though.

Here’s a quick primer for anyone looking to dip their toe in. 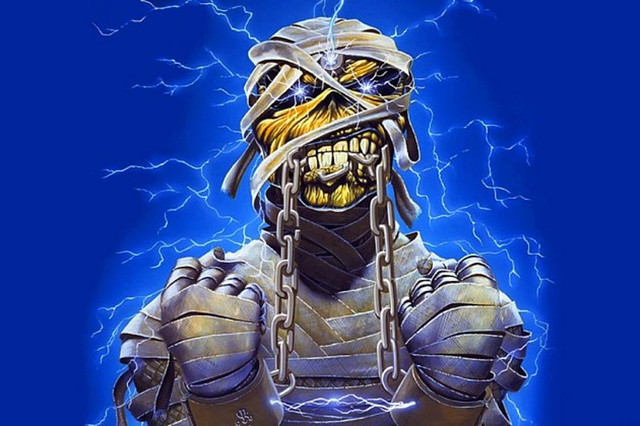 I have so much more to write but it’ll probably be tomorrow before i can.

In prep for this thread eventually coming along, I listened back through their entire discography and ranked their songs from best to worst.

I genuinely think everything down to The Reincarnation of Benjamin Breeg is absolute gold and worth your time. If you’ve never listened to Maiden before, and you’re looking to give them a try off the back of this thread, you can’t go wrong with those first 5-10 tracks. 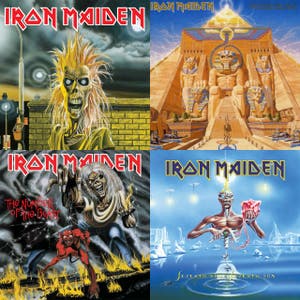 I’ve tried to be somewhat objective (e.g. Aces High is my favourite track, but as you’ll see it’s not at the top) but would love to hear what people think I’ve got wrong here.

Shout out to Sanctuary and Total Eclipse which are wicked and should have been on the corresponding studio albums, but I don’t think were on the originals or the latest remasters.

Aaaand based on the average rank of their songs in this list, here’s their studio albums from best to worst. (Again Powerslave or Seventh Son are probably my actual favourites, but think this list stands up)

my gateway to metal, blew my 18 year old mind when I first had a proper dig into their catalog. Saw them in 2008 on that Old Albums Only tour and sung my little lungs out
5/5

That was the first time I saw them and it was amazing. Watching the crowd sing the solo is the Phantom of Opera was one of the greatest things I’ve ever seen.