🎵 How Good Are They Really 🎵 Korn

Let’s see if there’s any Issues with this one…

Its also really funny to me that the guy off of Korn is called Jonathan.

Friday’s 300th thread is a bit more of a serious one so I thought this might be a good idea first!

I accidentally hit 1 but cba to change it.

True story: I once bought my oldest brother a Korn poster as a Christmas present, and he really hates them.

A good shout for the worst band of all time. Even at the height of my nu-metal years, when I was wearing out Linkin Park CDs, I thought the people I knew who were getting into Korn had absolutely lost the plot. I think time has only strengthened my convictions on this. An easy one.

In 1997 I accidentally went to see Korn live at Newcastle University Students Union.

Comically bad. I stood at the back giggling intermittently.

What was not so comical was that the two girls that I was with (who were fans) were invited backstage by the band afterwards.

It turns out that they’re deeply creepy men.

Awful, awful, awful. Even when I liked music that sounded like that I thought they were terrible.

Also trying to think of a band that’s had such consistently awful album artwork over such a sustained period and no-one’s coming to mind.

Probably the most embarrassing band I listened to as a teen.

I didn’t like them when they were an active thing and it’ll take some extremely compelling posts itt to make me think about revisiting them in the year of our lord two thousand and twenty one.

2nd gig I ever went to

I was 10, they were supported by puddle of mudd.

Feel absolutely no nostalgic goodwill towards them, a bad and quite vile band. 1.

More albums that don’t exist than do.

For a period of my life, this was my favourite band in the world.

I bought an issue of Kerrang! every Wednesday lunchtime during school, when we’d swing by WH Smiths to pick up the latest. My friends didn’t like the music I did, but they liked the quiz it had every week and we’d answer it on the way to the swings down Newbridge Fields. I liked the magazine, I made penpals through it, decorated my bedroom walls with its posters, and now and again it treated us to a free tape.

One of the first free tapes it gave away when I first started buying it, I listened to a lot. I liked the tape, it had some generic mid 90s pop punk and some heavier stuff too. I wasn’t so thrilled with the heavier stuff, as a guitarist I thought the excessive palm muting and repetitive riffs that were more rhythmic than melodic were a not for me and a bit lazy. Then came on Good God by KoRn. I fucking loved it. For the first time I understood why people liked this heavy music. It was so intense, yet had such a distinct melody, and not only that, had a middle 8 with the most badass vocal delivery this teenager had ever heard. The repetitive chugs finally made sense. 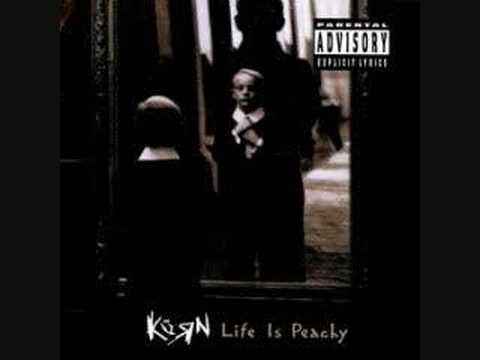 It wasn’t long before I got a copy of Life is Peachy, the album they were pushing at the time, and scoured mags like Metal Hammer and other Kerrang!s to find out more about them. I learned about the fucked up background Jonathan Davis had, the fact that Fieldy was actually his childhood bully, the horrors of growing up in redneck America poor and feeling like you didn’t fit in. There was so much excitement about them, and the tragedy and torment in Davis’s lyrics and vocal delivery were the greatest thing in the world to me.

I noticed that in all the things I read, a lot of the reviews suggested it was OK, but the debut was where the real good stuff was. I got hold of a copy and had a C90 with one album on one side and the other on the other. I played that tape to death. It soundtracked my paper round on Sunday mornings, my trips to school, my every moment I could listen.

You have to remember, at this time, the band weren’t as known as they are now, and there was a genuine interesting angle to their story. They hadn’t yet accumulated such wealth and indifference that they became more of a punchline. They were a mystery, unbridled intensity. I remember how haunting songs like Daddy were, the intensity of the stories behind the writing, the recording, what actually made it to tape. The fact that their first song off their first album was blind was so incredible, what a way to start things off.

I eventually got a chance to see them live, my parents weren’t too thrilled about me going to Newport Leisure Centre at such a young age to see live music. It was only the 4th time they’d have let me go see a band live, and I’m sure that their opinion would have been stronger if they’d actually listened to the music.

Last.fm concert page for Helmet at Newport Centre (Newport) on May 23, 1997. Discuss the gig, get concert tickets, see who's attending, find similar events.

I remember being so excited that night, the first support were a band who blew me away, someone I’d never heard of before called Limp Bizkit. I was mesmorised by them and later became obsessed with their song Counterfeit, but that was about as far as it went. I missed most of Helmet still buzzing from the first support and getting Wes Borland to sign my ticket, not knowing who he was but seeing others do the same thing.

I fucking loved the concert, banger after banger. I was a little scared, but that translated to nervous energy that made it so fun. I bought a t-shirt and wore it all of the time. It was this one:

I thought it was also cool that a metal band sold apparel that wasn’t just black. How novel!

For the next little while, during peak adolescence, I tried to convince everyone I knew that KoRn were the greatest band of all time. No-one would listen, and it ended up costing me some friends. The closest I got to someone else agreeing was a guy I was in a band with who wanted us to cover Slight Return by The Bluetones saying he could kind of understand how someone might like Good God. I played the music out of my bedroom window, hoping other kids in our cul-de-sac would hear it and wonder who it was and become as obsessed. In house parties I tried to slip a Korn song on. I learned you cannot just “slip a KoRn song on” between Greased Lightning and the Backstreet Boys.

When Follow The Leader came out, the world noticed. I loved it for a while, but noticed that while the music was becoming more varied and they’d gone nuts on the guitar pedals, the intensity was starting to edge away. That collaboration with Limp Bizkit didn’t feel good even back then. I passed off ADIDAS as just someone not giving a fuck, but that All In The Family one was just uninspired. I still listened to the album a lot, but as other people took more notice, I took less.

I grew out of adolescence after that and didn’t really listen to them much more. I found it sad that something I once held so dear became such a punchline, but as a kid who grew up on the poorest estate in a shit town, I had to find my own way to make my own identity and this sort of music spoke to me more than the clean clothes of Britpop ever did. No doubt they’ll get a kicking here, and deservedly so probably.

I almost never listen to them now, and can’t recapture that intensity I once felt when listening to them, but I still think they made some bangers right from their first song. 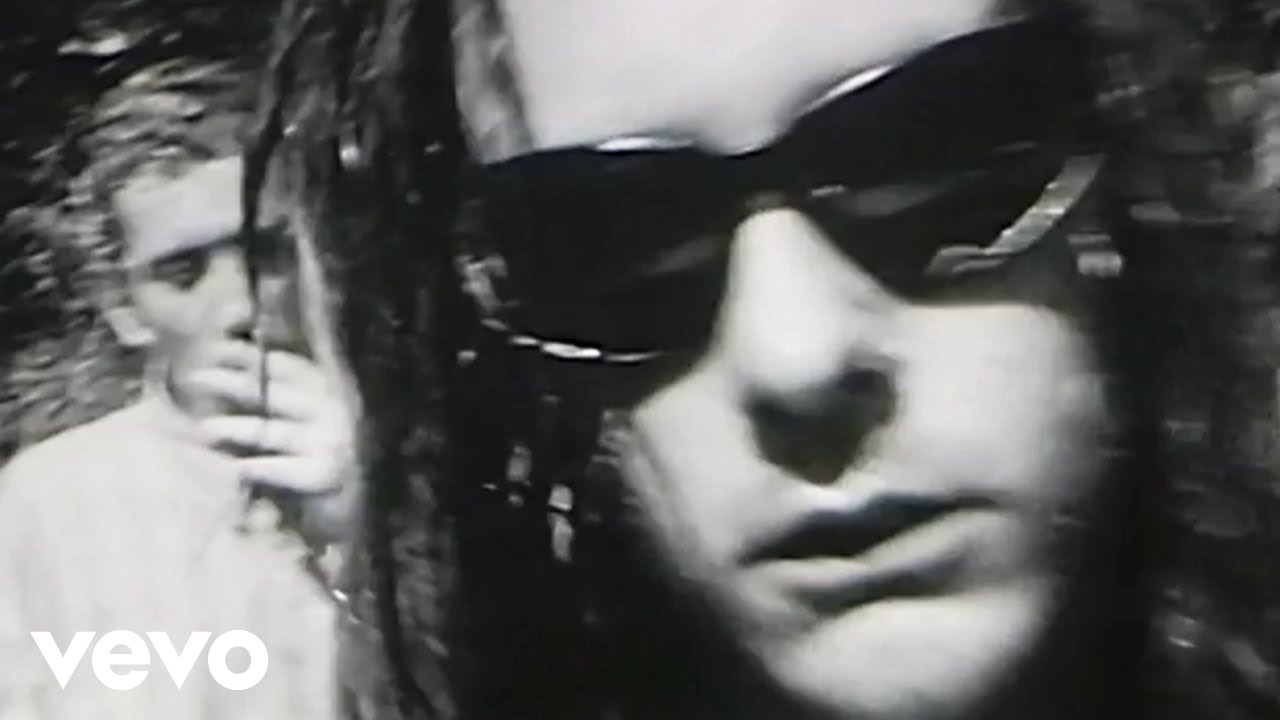 I appreciate that they’ve got some chunky riffs and good grooves, but they’ve never been my cup of tea. They’ve lived on in the public mind by virtue of not giving up, which is something to admire at least.

As a teen, I remember them being thrown in with Deftones, Limp Kizkit and Slipknot as being part of nu-metal. However, unlike Deftones, who started as rap metal but grew into something more strange and beautiful, and Slipknot, who sometimes genuinely sounded pissed off and heavy, Korn were like Limp Bizkit. Something about the sound just felt too cartoonish to strike a chord, despite Jonathan Davis’s deeply-felt anger.

Haven’t listened to any of their albums but know all the big singles up to Untouchables. Having said that, I’ve read that the debut is pretty good, so might give that a listen later.

Will Fieldy’s Dreams get it’s own thread?

liked the first two albums at the time but they’re unlistenable to me now. follow the leader and particularly issues both sound better to me now, probably wouldn’t isten to either one in full ever again but when i go through one of my biannual nu-metal nostalgia fests I’ll happily stick on a couple of bangers from them