🎵 How Good Are They Really 🎵 The Levellers

Get a job, get a haircut and stop listening to the levellers!

Probably harder to tell since people were jumping the fence so there will just be estimates were as they might have a better idea since it has got harder to get in without a ticket.

Nice to hear they are a gbol.

Impressed that they are still plugging away, doing their thing.

Must have heard a song or two back in the day but can’t recall tbh.

One Way was a very early song of its type for me, which is to say a song where the chorus truly seemed to be airlifted in and just hit you like a tonne of bricks. For whatever reason it was truly a wildly different beast.

I saw them play Glasto 97. They’re a good band but not really for me.

They’ve probably shaped my life more than any other band. A big band for me at school and a rare overlap between my wife and my music tastes.

Their post Levelling the Land output is a mixed bag in terms of quality, but they are self aware enough to always play the big tunes live. There is a scene in A Curious Life where one of them says they’ll be touring the hits for the rest of their life, it’s that or working in Waitrose.

I’ve seen them live 25+ times (mostly during the 90s) and am off to see them in Guildford in a couple of weeks. Always fun.

An immediate 5 even if, objectively, their music doesn’t deserve it.

15 years is an absolute beast, always loved that song.

Had a lot of mates in year 10 who loved them but for me I loved a few songs but never committed the whole thing.

The TV went to Beautiful Days festival a few years ago, she’d never heard the Levellers before so I made her this primer if anyone is interested. 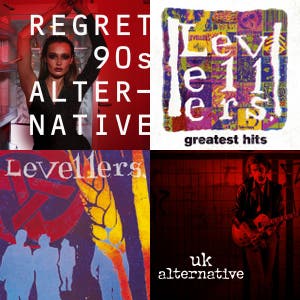 the band from 15 yrs ago

If anyone would have told me the first band I’d see coming out of the last lockdown was the Levellers playing an acoustic set, I would have used some rough language at them.
Funny how life works out.

Don’t really have anything to say about them, apart from that Just The One was on a Now compilation I used to listen to a lot as a kid. Good song. Abstain though

Right, time to roll up my sleeves.

The Levellers were the first band that I really loved, helped by the fact that I play the violin. A mate gave me a copy of WCTW as it was released and I loved it, absolutely loved it. They were also the first two gigs I ever went to, the first at the Rivermede in Reading and the second at Brixton Academy, when I was about 14 or 15. That first gig blew my mind, the noise, the crush, the vibe, and the Levellers were (probably are) a brilliant live band if you like the songs.

I was there with a bunch of mates at both and it’s one of my best memories, a hugely formative experience. We all had matching Levellers long sleeve Ts, which was absolutely fine and acceptable thank you, and I used to doodle the Levellers logo and the Subvert logo on everything. School books, clothes, school bag, whatever. Here is my teenage bedroom with said mates, including 15 years poster. I’ve followed them to a greater or lesser extent ever since, although in true diS style I will always prefer their earlier stuff. The first two albums still stand up for me, the third album I loved at the time but I won’t go back to now, and it’s been largely diminishing returns since then with the occasional tune thrown in. In my top 5 most important bands, for better or worse. I will give them a 5, although I wouldn’t honestly recommend anybody go back and listen to them. I think you had to be there and be at that age, all my most important bands come from that formative period.

Putting aside anything else, I just cannot stand the guys voice. I dunno what it is, just has this nails on a chalkboard effect when he holds a note for a while

Probably seen them live more than any other band just from working at their festival, no complaints from me, always good fun, they clearly mean a lot to people, One Way is great, Julie is great, never listened to an album. 3/5

Lionel Richie came on to sing One Way with them that night, that’s probably where the confusion comes from

Her Indoors is a huge fan, seen them about 30 times, was actually supposed to go see them last night in Morcambe but went to the pictures instead.

And as such a huge fan of the Levellers, she gives them… A 3!

Says only one album is good, the rest is rubbish, the shows are good but mainly because they’re a place to jump up and down and yell for two hours with a load of other people who smell like nag champa. Levelling The Land is very nostalgic from when she was a child but doesn’t listen to it outside of seeing them live. A nice group of people.

Had a listen to their top tracks, What A Beautiful Day sounded similar to another big 90s hit, otherwise absolutely no idea, do they have actual Irish roots cuz otherwise it sounds a bit at it.

Also just read they headlined Glasto in '94?!!! Hahahaha no they didn’t

Hope Street was on an indie compilation that I bought as a kid, it really shaped my musical taste that CD. I found the lyrics very deep indeed and meant to get one of their albums but never did, it was the days when it was reliant on pocket money and whatever the local record shops had. That’s all I have really, I get the feeling they were very big among the right people at the right time but outside that doesn’t make a lot of sense.

Hope Street was on an indie compilation that I bought as a kid,

Same, and I’m really trying to remember what it was. May have been one of the Shines.