How good are you at pool? 🎱

Yeah pub men have invented all these different quirks and variations to keep people off their pool tables I reckon. Makes it even more fun to clearly just dick about and pot the balls in any order you like or invent ridiculous new games while they watch.

I’d be crap these days not least because of my terrible eyesight, but I was the captain of the team that won the inter-college pool tournament at university. I also nine-balled the university team captain off the break in the trials for the team, but university pool teams aren’t picked on who’s good at pool so I didn’t make the team.

only local place that i go to that has a pool table is like this: 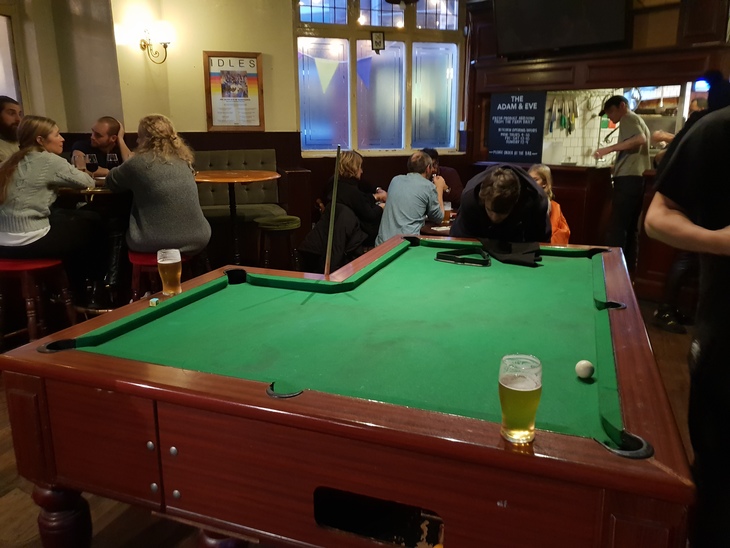 not bad really, but for someone who’s meant to be an expert in physics, some of my angles are utterly shocking

That is just fucking annoying.

I once played snooker. That was painful, you have no idea watching on the telly just how enormous those tables are. They’re vast. It’s not just that the tables are vast, but the pockets are tiny.

If you go from Snooker to American pool like we used to at Rileys it makes you feel like a god as its just so much easier to pot anything you have even half a shot at.

9 ball is the better game. Decent enough at both

I am terrible at pool, which was really hammered home to me by my laddy flatmates at university who were all mysteriously pretty decent. I love playing games but I’m deeply non-competitive, so that was just horrible because I’d be there trying to do pool, and they’d be doing mindgames and stuff. Waste of effort on their part. I don’t need to be psyched out to fail at pool, lads!

Couple of places near me with bar billiards tables, really want to understand what’s going on

Probably got them for customers to play on. no where near as good as I want to be, but surprisingly competent when i put my mind to it

I still remember the best shot I ever played at pool. I then bollocksed up potting the final yellow in the right middle, ended up really close to the black and had to cut it in to the left bottom really fine. Went in though and the white did that thing where it ran off the right, bottom and left cushions all the way round the black as it was trickling into the pocket.

went for the option I chose cos I LOVE shithouse snooker players, greatly entertaining

Is Mark Williams still doing that weird break off of his?