💿 How Good Is It Really 💿 Funeral

100% this. In the backseat just destroys me every time. One of the best opening and closing tracks of an album ever.

But the bits in the middle aren’t bad either. I just love those moments in Wake Up and Crown of Love when they just build up and up… and up… and then suddenly from out of nowhere it drops into motown, or whatever. It’s outrageous that those aren’t my favourite songs of the album (given how much love I have for them)

The good old days of buying an album in HMV after one NME review, not having any idea at all what it’s going to sound like and it ending up as one of my all-time favouties. I kinda like having that risk that you don’t have these days of streaming.

We went on holiday to Canada and had an amazing Canadian playlist in the car with Unicorns, Broken Social Club, the Dears and so on - but whenever a song from Funeral came on, it was always the highlight.

But, yes, In the Backseat definitely gets my vote as the best song that they have ever done, and is definitely up there on my all-time favourite songs list.

One of the easiest 10s. I love this album so much.

Production-wise, it pretty much sounds like it was recorded in a basement but it completely works.

I saw them live at Reading 2007 and the great thing about the production of Funeral is that the songs all sound absolutely enormous live - to the extent that ever since I saw them live, they weirdly sound much bigger on the album than they did before.

Funeral is 48m long but it flies by in what feels like about 30m. Suburbs could have been a 10/10 if edited. Neon Bible and Reflektor aren’t that consistent but the highlights are superb.

I remember buying this and You Fail Me by Converge together, what a combo eh?

ALICE DIED, IN THE NIGHT

Massively important for my taste in music. Until Funeral came out when I was 15 I listened almost exclusively hip hop. I opened a few indie big albums, Radiohead, The Flaming Lips, the White Stripes, The Strokes, Franz Ferdinand, some brit pop and pop punk CDs I had bought when I was a kid. They didn’t click in the same way with me.

A friend imported Funeral shortly after its US and wouldn’t shut up about it, so I uploaded it onto my MP3 player, but left it unplayed. One day I got drunk at lunchtime at school, inevitably got into a fight with my teacher in the next lesson, and got kicked out. I sat on a bench, and for some reason reached for Funeral and was stopped in my tracks. I sat in silence for 45 minutes completely enthralled, thrilled, moved, overwhelmed.

From that point I carnivorously devoured every single indie rock album from the last 20 years I could get my hands on trying to find things that hit the same spot. And obviously from there my music tastes branched out. Probably singlehandedly responsible for me realising there was more to be gained by exploring other genres of music. I formed friendships around a love of the album and others that inspired it.

I definitely came to an album that wears its heart on its sleeve at the perfect time. It will always capture a moment of adolescence for me as it clearly does for the band. I don’t know how the album lands for people who come at it at an age when they’re a bit more cynical. Nor for those that had already heard In the Aeroplane Over the Sea or the wave of ramshackle DIY indie folk punk predecessors. Not to mention the imitators that came after, or the decade of the millennial whoop on every other pop song.

But for me a completely unobjective 10/10. An earnest collection of excellent to exceptional songs, delivered with an energy and hunger that set it apart from anything else they’ve ever done, if possibly not quite the absolutely flawless original masterpiece I thought upon hearing it at 15. But few if any albums have made the impression it did on me the first time I listened to them, and it’ll always take me back to that place. I doubt I’m the only one.

It’s a fucking great record, that being said i haven’t listened to it in a while. 9

Wonderful, wonderful album. Although it spawned a lot of imitators, and those imitators definitely sound very of their time, this album alone sounds completely timeless to me. The songs are so strong and backed with the instrumentation and arrangements they have they just become otherworldly. Production’s fantastic too, shares that thing early Godspeed records do where they sound like they’ve been recorded cheaply but everything still sounds so clear.

Impossible to pick a favourite track, there’s certainly one or two tracks I like less but the best tracks are all standouts in their own way.

Agreed that they were an incredible live band at the time, saw them just after this record came out (which was booked initially for Manchester Academy 3 which holds a few hundred people, but was bumped to Academy 1 which holds at least 2000 as they exploded in popularity) and they sounded enormous. Love how all of them sing a lot of the melody parts, and especially how no matter how much noise everyone’s making, you can always, always hear Regine

Have posted this in the Glastonbury thread but their 2007 set is well worth checking out, it’s quite Neon Bible heavy but at least half of Funeral gets an airing: BBC iPlayer - Glastonbury - Arcade Fire

I remember buying it on import after Pitchfork gave it a high score and absolutely loved it.

Saw their first UK gigs at King’s College, ULU and The Astoria. The King’s College gig remains my best ever gig. They played virtually the whole album. Stunning gig and album.

Unfortunately I’ve gone off them recently but a great album.

Haven’t listened to it all the way through for ages so have it on now. It really is an amazing album isn’t it? It has a certain tone/feel to it that is really hard to replicate, I was hovering over the 9 because I do think there are a couple of songs that drag it down and touch but I’m going to give it 10, being their debut and it just landing as an instant indie classic.

I remember hearing Power Out on MTV2 late at night and it’s such a powerful song, Rebellion did then get overplayed which took away from it a little bit but yeah this is one of those albums that helped me view music differently. That whole early to mid 2000s really was the perfect time for me, like @littlebirds I had a very narrow scope of music at the time and this is one of the albums that really helped me break out into the wider scenes and really started loving music for me rather than trying to fit in with what was popular at school (mostly garage/rap etc).

Once upon a time I would have been gushing over this, but revisiting it recently, I found myself skipping more than I was listening. I didn’t have that adolescent bond with it because I was already 28 when it dropped. I think I was at the Slint ATP when people were starting to talk about it, and I definitely bought into the excitement initially and into Neon Bible. But I hated The Suburbs and nothing since has generated any kind of enthusiasm, so maybe the way I feel about them now impacts how I feel about Funeral. I dunno.

Yes, was going to link to the Glastonbury set too. Watched it Saturday. Really good.

Regine is so cool

Saw their first UK gigs at King’s College, ULU and The Astoria. The King’s College gig remains my best ever gig. They played virtually the whole album. Stunning gig and album.

Went to Kings College and ULU. Kings was amazing. ULU I was so drunk I barely remember it. Oh dear.

like, Pitchfork was this absolute treasure trove to me at that point because one of the only things giving me life was using the computer when I was at my big sister’s, downloading scatterings of tunes, burning them onto CD-Rs to listen to at home (no computer at home)

albums like that one were absolutely fascinating, like this alternate recent history of music that I never knew existed. I find it hard to explain the uncanny sense of wonder it gave me discovering all of that music.

anyway… that album was an unknown past, and I was only 16 so my sense of time was different to what it js now, and now six years ago just feels like the other day, right?

the way our constant internet usage creates a constant non-present will have contributed to that feeling too, I reckon. either way, time seems to hold so much less substance than it used to.

yeah, anyway!! umm… both those albums are genuinely wonderful, like inherent magical, and if people shrug at them, that’s their loss

You know, it’s a great, great album, but for some reason I can’t see to give it more than an 8. Not sure why, it just misses something for me. Think it’s because the opening lyrics always grate slightly, “And if my parents are crying, then I’ll dig a tunnel, from my window to yours”, the crying implies a rhyme that would work if it was “your window to mine”, and it always throws me off.

Aye both great LPs for sure.
In the Merge: Our Noise book Arcade Fire basically signed with Merge because they loved NMH.

Love it to bits. Being a young teen in the nu-metal and skate punk era, then getting into 90s alt rock through my older siblings, this was probably the first album from a properly current and exciting band I really loved. God knows how many times I’ve played it. I still get a rush of nostalgia every time I see that CD. I tend to listen to it around Christmas now, and it still gives me warm glow. 7 Kettles is the only real weak point, but it still works OK as a transition between that incredible opening run and the back half of the album.

Power Out was my favourite song as an 18 year old. When I saw them in 2007, a steward flashed us a setlist before the show - no Power Out and Neon Bible as the second encore. I was a bit gutted, but loved the show anyway. They come out for the second encore, strapping up more guitars than seem necessary for Neon Bible…They launched into Power Out instead and I went absolutely wild. Still the best surprise I’ve had a gig.

I acquired a dodgy DVD of most of the album being performed on Canal+ which I rinsed about as hard as the album itself. 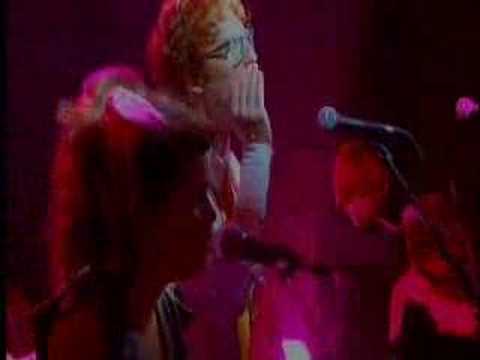 So very special in so many ways. Also never need to hear any of it again. Might stick it on anyway and see if I get feels or overfamiliarity and boredom.

Digging a tunnel (presumably to escape the anguish of your parents failing marriage) to reach a young lover has a different implication than… digging one the other way around. It’s never even struck me that it doesn’t rhyme before, but the lyric wouldn’t have the same meaning