For my brief period of wrestling fandom, HHH was my absolute favourite, for reasons I can’t quite articulate. Maybe I was just being contrary - all my mates stanned the Rock, or Undertaker, or Stone Cold, or the Hardy Boys, while Triple H was just the bad guy, but I really dug him. In DT class we had to make a cushion case which we could print with a self-made design, and I drew up HHH’s logo! What a fucking weirdo.

I think he was a great heel, being part of “the establishment”, but like their mean, vicious henchman, he looked good in his little pants and kind of funny in a suit, and pedigree is the second best finisher (after the stunner).

So yeah, a five, even if I’m not entirely sure why. 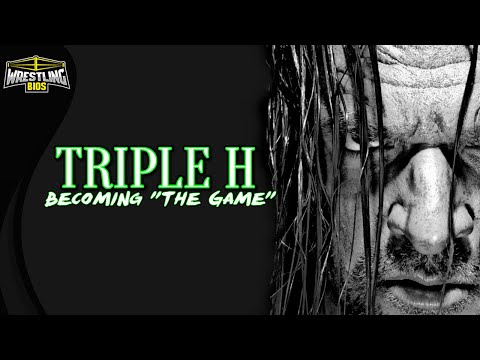 Hated him when I was into it, but he has a pretty good entrance. Massive ego, on the roids big time, that fucking sledgehammer, the iconography, that Booker match, that Sting match. Quite like him now though

Probably a 4/5 in fairness.

4/5. Like him or loathe him as an individual, he mattered for a long while and while he probably didn’t deserve to be top dog, he had enough about him to be in and around the upper-midcard/main event as a heel for a long time. Didn’t make anywhere near as good a face.

pedigree is the second best finisher (after the stunner)

Good take. Something disdainful about it which worked well for a heel character.

The Rock’s impression of HHH in that promo is excellent.

Is this a thing?!

It certainly was at one stage, yeah. Whether that was down to him or others dealing with branding is unknown.

Great opponent but a pretty bad person to build your company around. Half of his total output was self indulgent, but he was a bloody great foil.

Think hes got a better mind for the business than an actual wrestler. I mean hes good, had a lot if classic matches, but you can pinpoint most pre cena lulls at his direction. 3

I completely get this, I loved how much of shit he was in 2000-01 as a kid (loved Edge & Christian for the same reason) and was my favourite main event guy at the time

Hmmm he is a strange one. I think he is a bit under rated as his matches were always serviceable, and I think he did do more than people realise to make others look good (his match with Taka , his reaction to the Cactus Jack reveal, having Chyna despite how that panned out etc) but DX really got old quick and the promos were absolutely interminable

Got the best theme in the business imo

Thank you for this, I was going to put him at a 4, but after remembering some of this stuff, it’s gone down to a 3.

His rumble match with Foley is a classic and I think it’s both men’s best match. Great person now, with NXT and think if he takes over the business when Vince is gone, it’s in good hands. However, all that you have written evens it out.

This has been said already, but I gotta post this That being said, great on the mic and a great look/entrance
3?4?

That mad made laugh way more than it should’ve

I often think about his friendship with Shawn and how he must have been so dismayed with the state of him but basically kept him in check to some degree. Also pretty much saved Ric Flair’s life when he was at his lowest. Think stuff like this gets forgotten because while he definitely had a cunt title run in the mid-2000s it was also when he was basically the company’s only remaining Attitude era star and put over Batista, Orton and Cena to make new ones at a time the product in general was not very good. Think people like to assume he politicked his way to the top but I really do think he just worked hard and got himself over, and his relationship with Steph did by all accounts seem to happen organically.

But then there’s DX reunited in the late 00s.

Just remembered that he won the rumble for the title in like 2016 and headlined WM against THE GRAND HOUND and it was an absolute shitshow. Love that he thought he could get the crowd to cheer Roman when The Rock couldn’t.

The WM match was terrible but the 2016 Royal Rumble was really good, largely because it was the debut of AJ Styles (and Roman Reign’s poochie face reaction) and it put Dean Ambrose over. The match Tri had with Ambrose on the road to Mania was really fucking good and had people invested in him. Lo and behold they put the belt on him a few months after (for an admittedly pretty terrible title run but that wasn’t Amrbose’s fault)

Basically he still ended up making a star, just not the one they intended.

As an ambassador and a mind of the business hes great, legitimately responsible for a lot of good things and handles himself incredibly well in the role hes currently in.

Just didnt find him all that compelling when he was the main focus although his part in his feuds with Mick Foley, Batista, The Rock, Daniel Bryan are often grossly understated by people looking back. He is an incredible heel to work against for a baby face. But the problem is that only truly amounted to about a 3rd of a very drawn out career

Hes also smart. He went to parties and was the cheauvure because he knew that being sober and using that as a reason not to integrate would kill your career at the time. So he still went to the parties even though it wssnt his scene at all, but was smart enough to stick to his principles

can’t disagree with that for sure, he’s had a lot of shite but also some brilliant stuff. As I say, I’m only pushing him to a 4 for his NXT and other behind the scenes work in the last decade or so, purely as a wrestling career its a 3